02 US Map Free Vector with State Names, in Adobe Illustrator and PDF 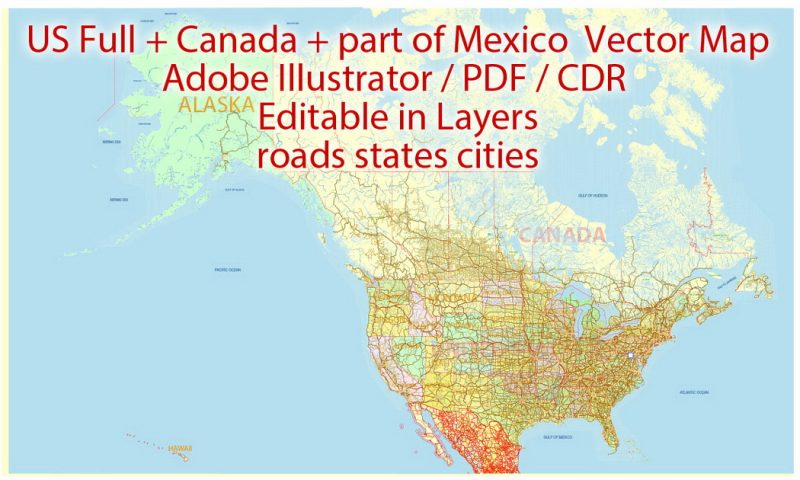 Map US Canada part of Mexico all Roads, Cities, States, all names

Each player starts with one cell (one minute of latitude and one minute of longitude) on Google Maps and you expand your territory by buying or conquering other cells. There are 55 million cells and the game can support millions of players. 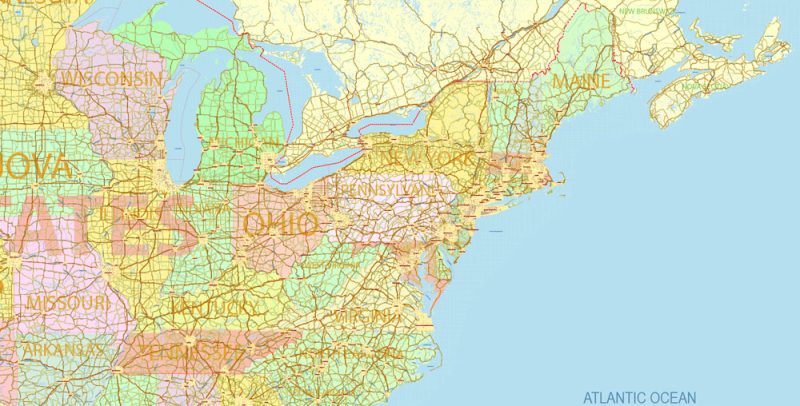 Players earn credits over time and you can buy extra credits to help your empire expand more quickly. You can also earn additional credits by inviting your friends to join the game. The game includes a chat option so it should be easy to make alliances with other players.
When you first register there is a very handy step by step tutorial that explains the basics of the game. I advise you not to skip the tutorial, it is essential to understanding the game and by completing the tutorial you will earn extra credits.
Source: http://googlemapsmania.blogspot.com/2009/06/conquer-world-on-google-maps.html

The United States of America (USA), commonly referred to as the United States (U.S.) or America, is a federal republic composed of 50 states, a federal district, five major self-governing territories, and various possessions. Forty-eight of the fifty states and the federal district are contiguous and located in North America between Canada and Mexico. The state of Alaska is in the far northwestern corner of North America, with a land border to the east with Canada and separated by the Bering Strait from Russia. The state of Hawaii is an archipelago in the mid-Pacific. The territories are scattered about the Pacific Ocean and the Caribbean Sea. Nine time zones are covered. The geography, climate and wildlife of the country are extremely diverse. 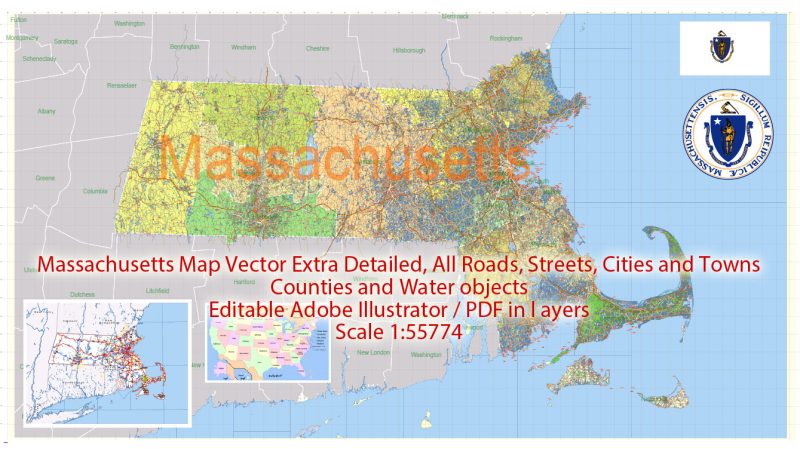 At 3.8 million square miles (9.8 million km2) and with over 324 million people, the United States is the world’s fourth-largest country by total area (and fourth-largest by land area) and the third-most populous. It is one of the world’s most ethnically diverse and multicultural nations, and is home to the world’s largest immigration population. Urbanization climbed to over 80% in 2010 and leads to growing megaregions. The country’s capital is Washington, D.C. and its largest city is New York City; the other major metropolitan areas, all with around five million or more inhabitants, are Los Angeles, Chicago, San Francisco, Boston, Dallas, Philadelphia, Houston, Miami, and Atlanta.

Paleo-Indians migrated from Asia to the North American mainland at least 15,000 years ago. European colonization began in the 16th century. The United States emerged from 13 British colonies along the East Coast. Numerous disputes between Great Britain and the colonies in the aftermath of the Seven Years’ War led to the American Revolution, which began in 1775. On July 4, 1776, as the colonies were fighting Great Britain in the American Revolutionary War, delegates from the 13 colonies unanimously adopted the Declaration of Independence. 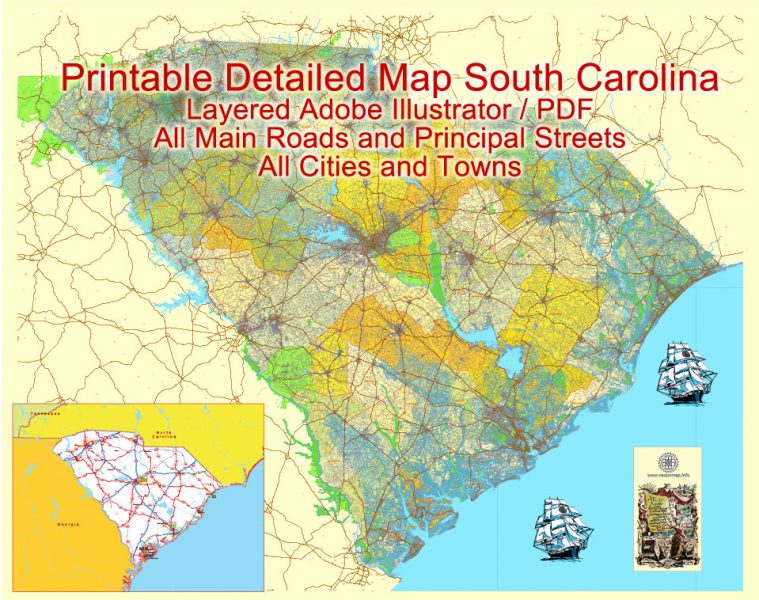 The war ended in 1783 with recognition of the independence of the United States by Great Britain and was the first successful war of independence against a European colonial empire. The current constitution was adopted in 1788, after the Articles of Confederation, adopted in 1781, were felt to have provided inadequate federal powers. The first ten amendments, collectively named the Bill of Rights, were ratified in 1791 and designed to guarantee many fundamental civil liberties.

The United States embarked on a vigorous expansion across North America throughout the 19th century, displacing American Indian tribes, acquiring new territories, and gradually admitting new states until it spanned the continent by 1848. During the second half of the 19th century, the American Civil War led to the end of legal slavery in the country. By the end of that century, the United States extended into the Pacific Ocean, and its economy, driven in large part by the Industrial Revolution, began to soar. 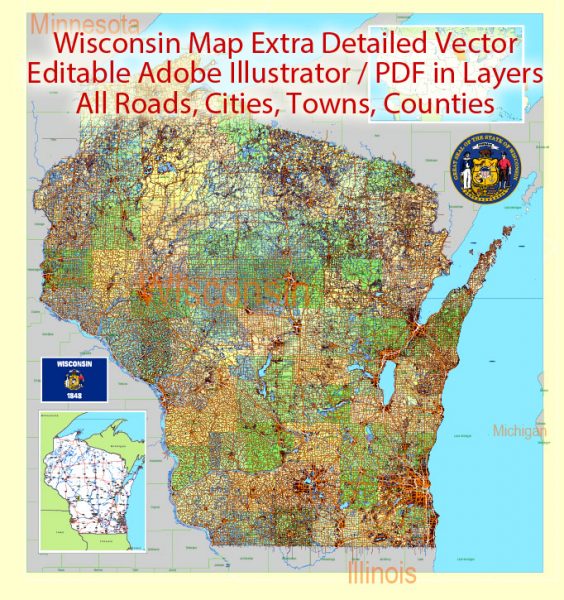 The Spanish–American War and World War I confirmed the country’s status as a global military power. The United States emerged from World War II as a global superpower, the first country to develop nuclear weapons, the only country to use them in warfare, and a permanent member of the United Nations Security Council. It is a founding member of the Organization of American States (UAS) and various other Pan-American and international organizations. The end of the Cold War and the dissolution of the Soviet Union in 1991 left the United States map in vector as the world’s sole superpower. 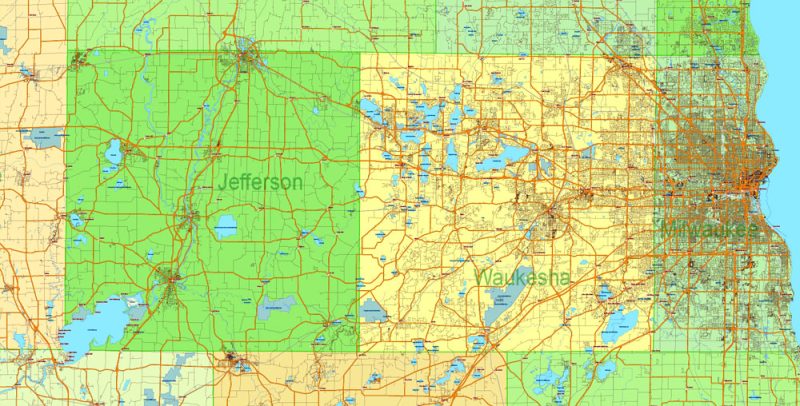 The United States is a highly developed country, with the world’s largest economy by nominal GDP. It ranks highly in several measures of socioeconomic performance, including average wage, human development, per capita GDP, and productivity per person. While the U.S. economy is considered post-industrial, characterized by the dominance of services and knowledge economy, the manufacturing sector remains the second-largest in the world. Though its population is only 4.4% of the world total, the United States accounts for nearly a quarter of world GDP and almost a third of global military spending, making it the world’s foremost military and economic power. The United States is a prominent political and cultural force internationally, and a leader in scientific research and technological innovations.

GEOGRAPHY of the United States of America

The United States of America is the world’s third largest country in size and nearly the third largest in terms of population. Located in North America, the country is bordered on the west by the Pacific Ocean and to the east by the Atlantic Ocean. Along the northern border is Canada and the southern border is Mexico. There are 50 states and the District of Columbia. 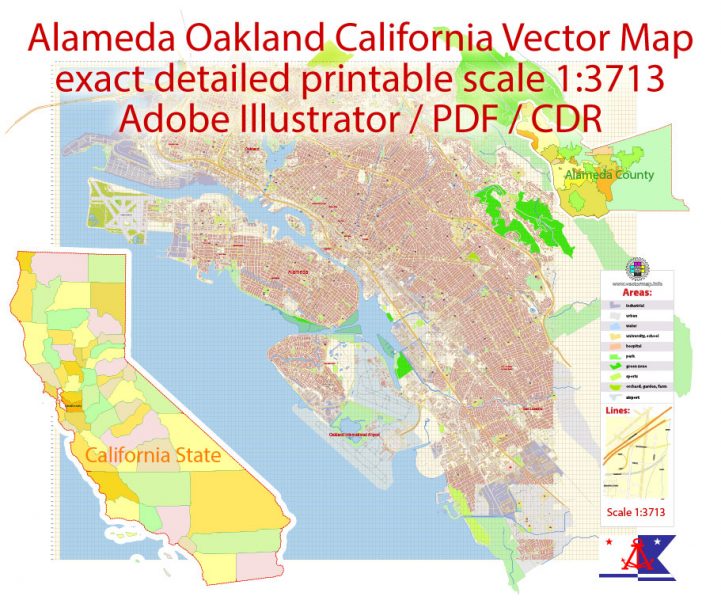 More than twice the size of the European Union, the United States has high mountains in the West and a vast central plain. The lowest point in the country is in Death Valley which is at -282 feet (-86 meters) and the highest peak is Denali (Mt. McKinley) at 20,320 feet (6,198 meters).

US MAP CATALOG BY STATE NAME: you can see all maps of the cities and counties by click on the name of state