This vector map of Santiago city is used as a basis for design, editing, and further printing.

This is the most detailed, exact map of Santiago city for high-quality printing and polygraphy. You can always clarify the map development date by contacting us.

For your convenience, all objects on Santiago vector city map are divided into layers. And the editing is very easy – colors, lines, etc.

You can easily add any objects needed (e.g. shops, salons, sale points, gas station or attraction) on any layer of Santiago vector map.

Santiago de los Caballeros or simply Santiago is the second-largest city in the Dominican Republic, and the fourth-largest city in the Caribbean. It is the capital of the Santiago Province and the major metropolis in the north-central region of the country. Its urban population reaches 550,753 inhabitants, and if rural areas are included its population rises to 691,262. Santiago is located approximately 155 km (96 mi) northwest of Santo Domingo with an average altitude of 178 meters (584 ft). It was traditionally known in English as St. Yago. During the Haitian occupation from 1822 to 1844 it was officially designated as Saint-Yague. 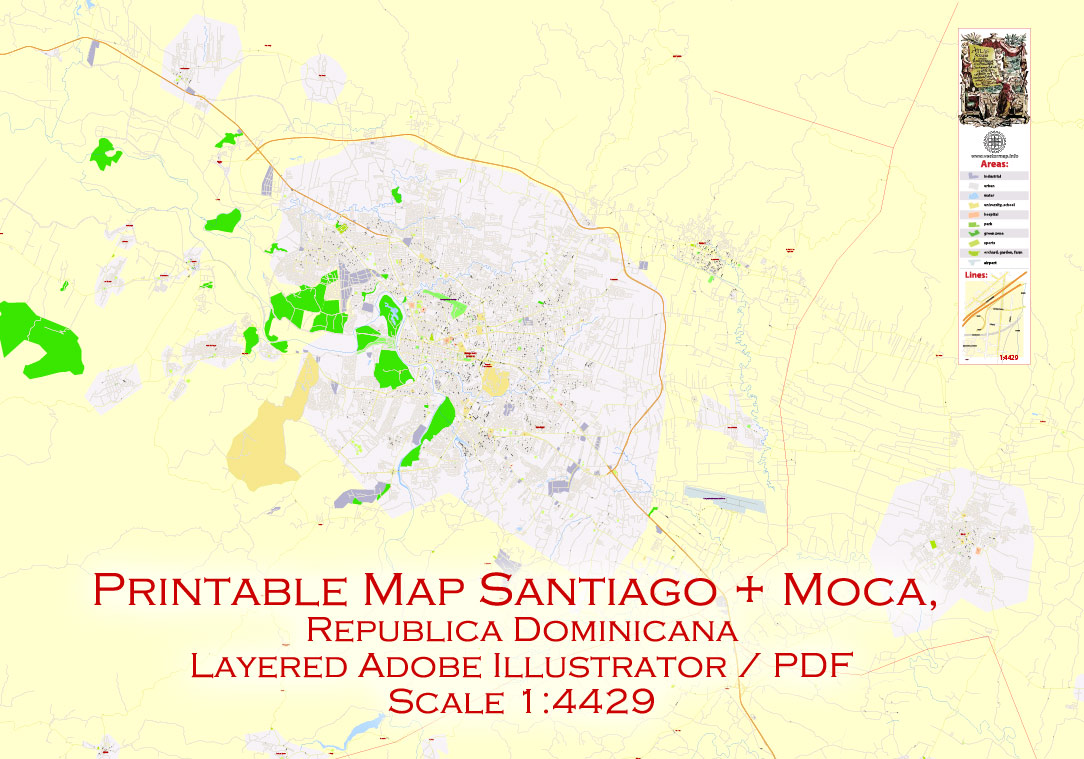 One of the advantages of Santiago city vector maps of our production is the relevance of cartographic data, we constantly update all our products.

This vector map of Santiago city is used by:
designers, layout designers, printers, advertisers and architects. Our product – vector maps – is designed for further editing and printing in large formats – from @Wall format (a few meters) to A-0 and A-1, A-2, A-3.

The advertising and presentation map of Santiago city (usually the final designer marks the routes, and puts the client’s objects (shops, saloons, gas stations etc.)
The undoubted advantage is that people will NEVER throw out this advertising product – the map. In fact, as an advertising medium, a city map is the most “long-playing” of the well-known polygraphic advertising media, with the longest lifespan, and the maximum number of interactions with the customer.

Take a look, who purchases our vector maps of Santiago city in “Our Clients and Friends” page – these are large and small companies, from super-brands like Volvo and Starbucks, to small design studios and printing houses.

Founded in 1495 during the first wave of European settlement in the New World, the city is the “first Santiago of the Americas”. Today the city is one of the Dominican Republic’s cultural, political, industrial, and financial centers. Due to its location in the fertile Cibao Valley it has a robust agricultural sector and is a leading exporter of rum, textiles, and cigars. Santiago is known as “La Ciudad Corazón” (the “Heartland City”). 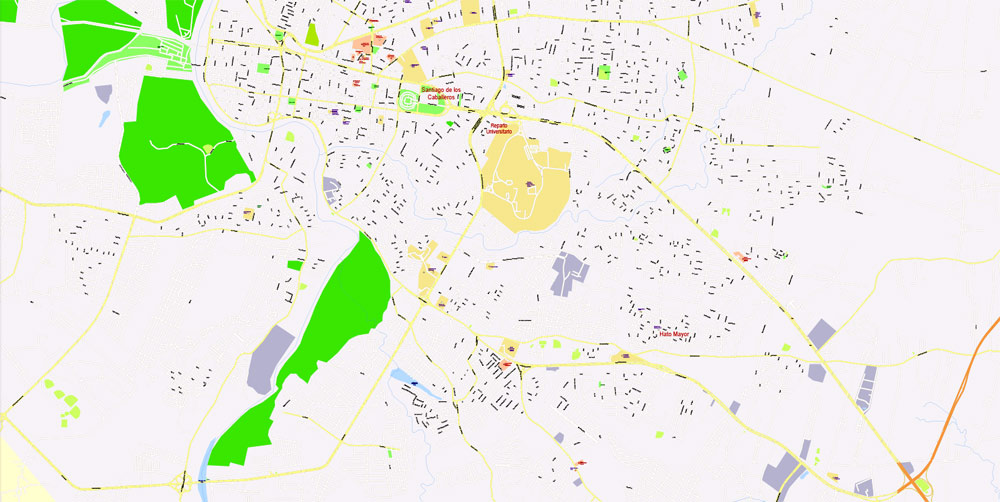 It’s very easy to work with vector maps of Santiago city, even for a not very experienced designer who can turn on and off the map layers, add new objects, change the colors of fill and lines according to customer requirements.

The undoubted advantage of Santiago city vector maps in printing is an excellent and detailed visualization, when customer can expand a large paper map and instantly define his location, find a landmark, an object or address on map, unlike using the popular electronic formats of Google and Yandex maps for example.

Printable vector maps of Santiago city are much more convenient and efficient than any electronic maps on your smartphone, because ALL DETAILS are displayed in the entire space of Santiago city map. 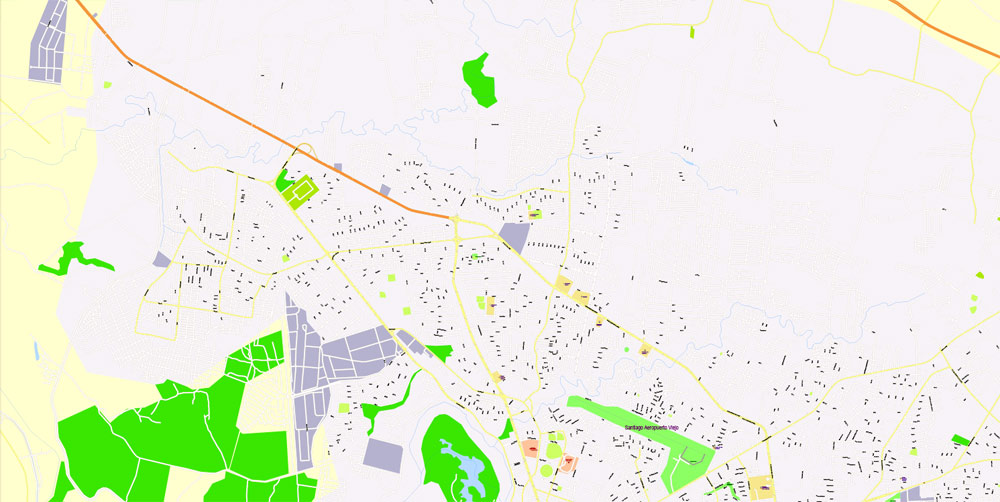 You will probably want to change the color scheme used on our Santiago vector city map.

To quickly and effectively play with colors.
Of course, you can do it manually, all objects in our Santiago city vector map are divided according to types and layers, and you can easily change the color gamma of vector objects in groups and layers.

But there is more effective way of working with the whole VECTOR MAP of Santiago city and all layers:

If you have selected a part or a layer of Santiago city vector map and open the dialog box by clicking the icon in the Control panel, on the Samples palette or the Color Catalog, or if you choose Edit > Edit Colors> Repaint Graphic Object, then the «Repaint Graphic Object» dialog box appears, and you get access to «Assign» and «Edit» tabs. 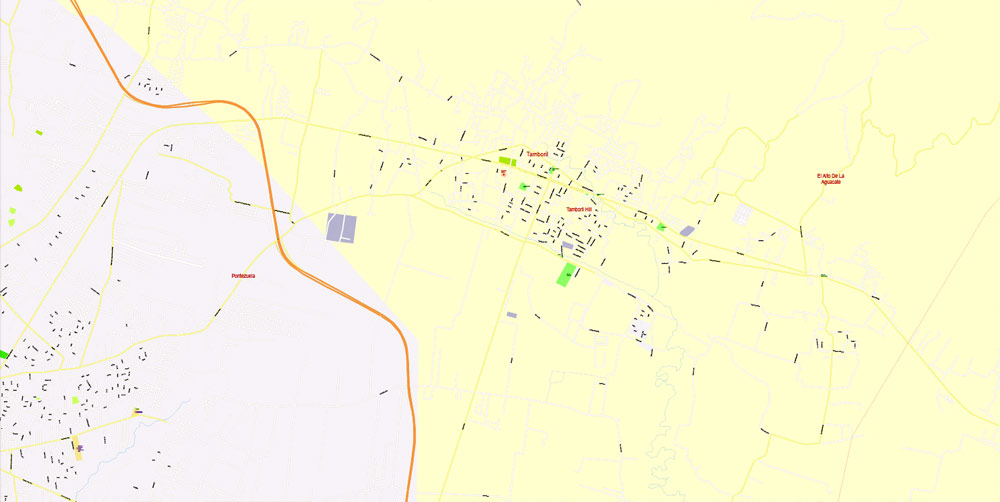 «Edit»
The «Edit» tab is designed to create a new or edit the existing color groups.
The harmony rules Menu and the Color Wheel are used to conduct experiments with color harmonies. The color wheel shows how colors are related in color harmony, and the color bars allow you to view and manipulate an individual color values. In addition, you can adjust the brightness, add and remove colors, save color groups and view colors on the selected Vector Map of Santiago city or a separated layers. 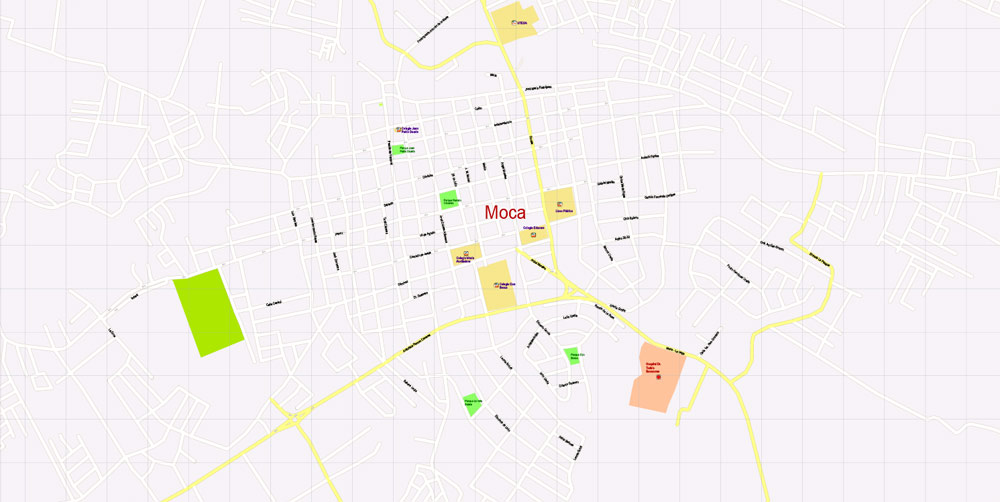 «Assign»
The «Assign» tab is used to view and control on how the original colors are replaced with colors from the color group like your corporate colors in the Vector Map of Santiago city.

The assign color ability is provided only if the entire map, layer or fragment is selected in the document. You can specify which of new colors replace the current colors, whether the spot colors should be preserved and how colors are replaced (for example, you can replace colors completely or changing the color tone while maintaining the brightness). The «Assign» tab allows you to redefine colors in the Vector Map of Santiago city, or in separate layers and fragments using the current color group or reducing the number of colors in the current Vector Map.

Any color group can be selected and edited, or used to redefine the colors in the selected vector map of Santiago city, its fragments or elements.

Santiago de los Caballeros is located on a hilly terrain in the middle of the Cibao Valley in the Central Region of the Dominican Republic, one of the most fertile lands found in the island. The Yaque del Norte River passes by Santiago which is in between the Cordillera Central and the Cordillera Septentrional, two of the three major mountain ranges on the island of Hispaniola, forming the Cibao Valley. 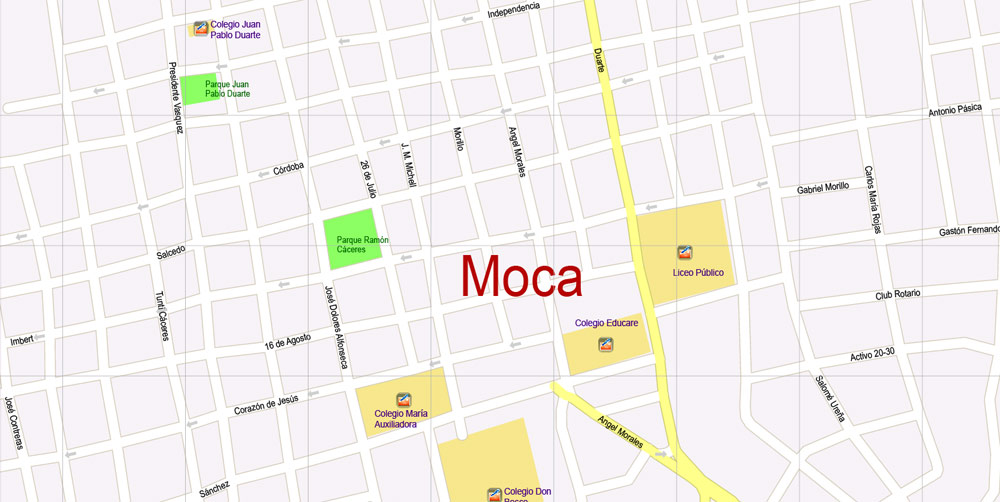 Use these commands if you need to edit the colors in the selected vector map of Santiago city.

«Repaint Graphic object» button on the «Control» panel.
Use this button if you need to adjust colors of Santiago city vector map using the а «Repaint graphic object» dialog box.

Note. This color editing method is convenient for global color adjustment in a vector map, if global colors were not used when creating a City Map of Santiago. 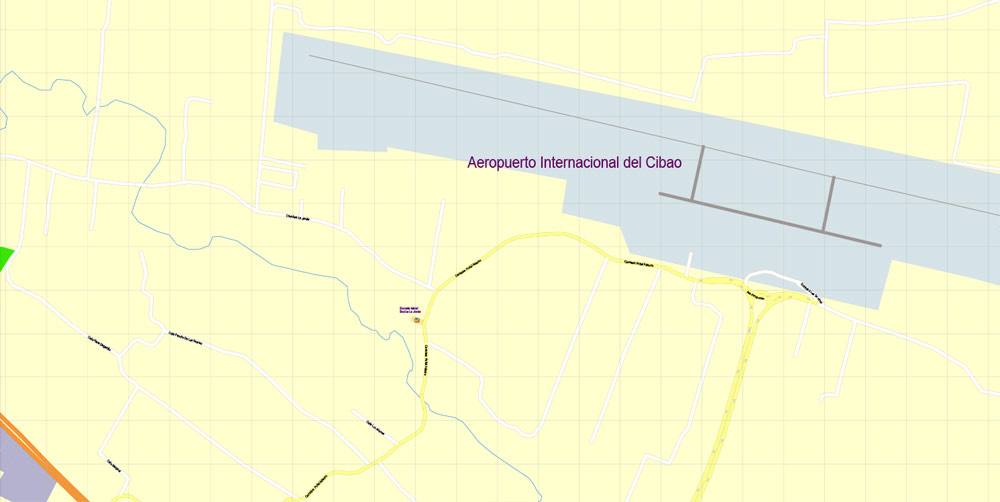 Click this button if you need to edit colors on the «Color Catalog» palette or edit and then apply them to the selected Vector Map of Santiago city or its fragment.

Click this button if you need to edit the colors in the specific color group or edit and apply them to the selected Vector Map of Santiago city or a group of its elements, for example, the whole layer “Streets and lines”. You can also double-click the color group in the Samples panel to open the dialog box. 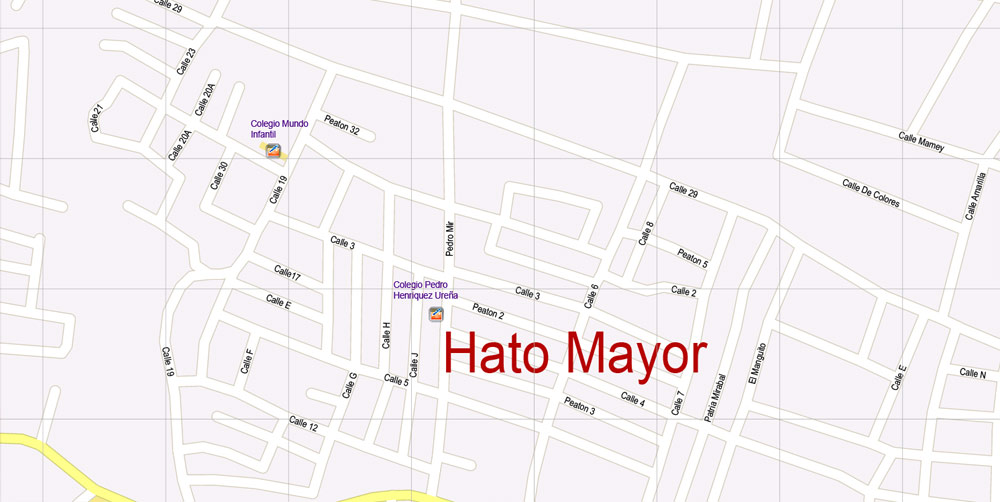 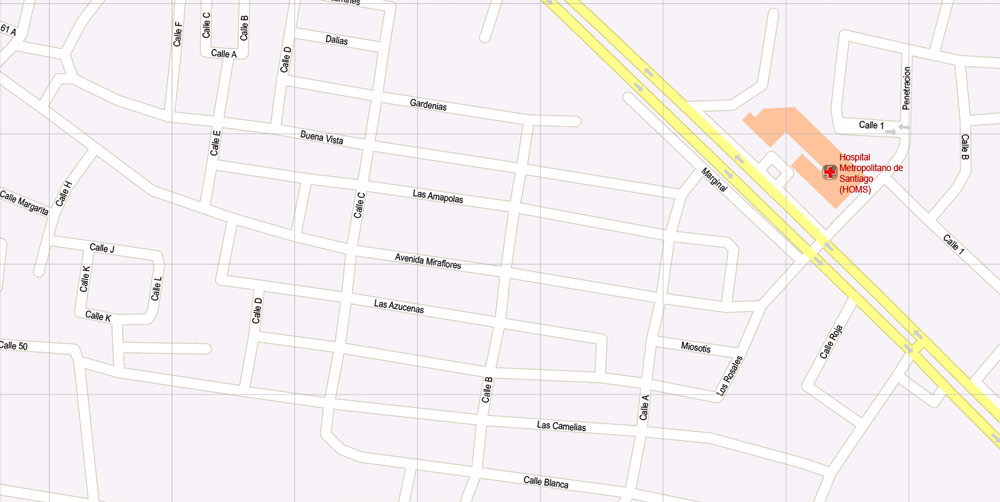 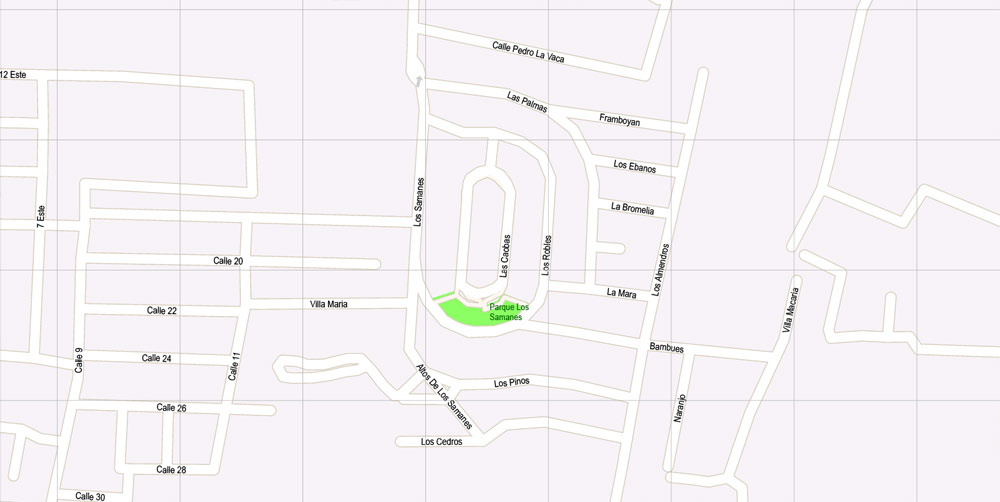 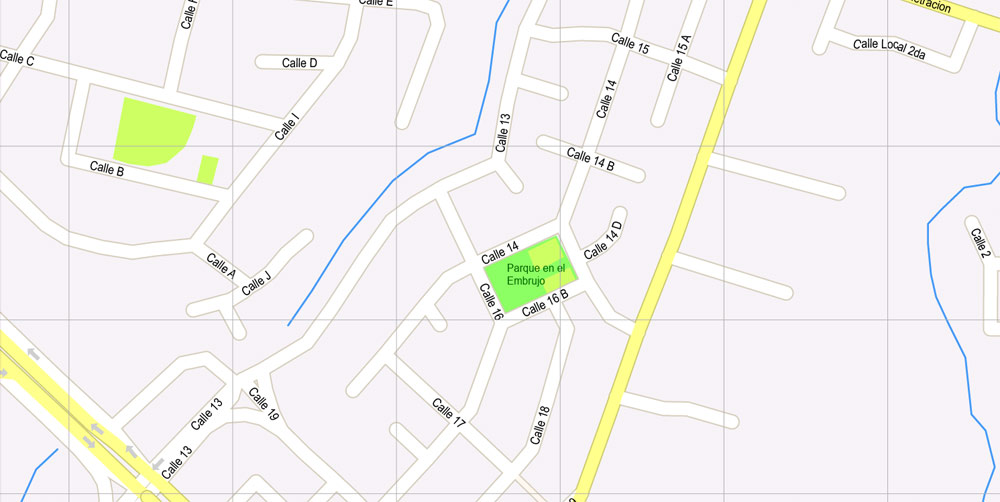 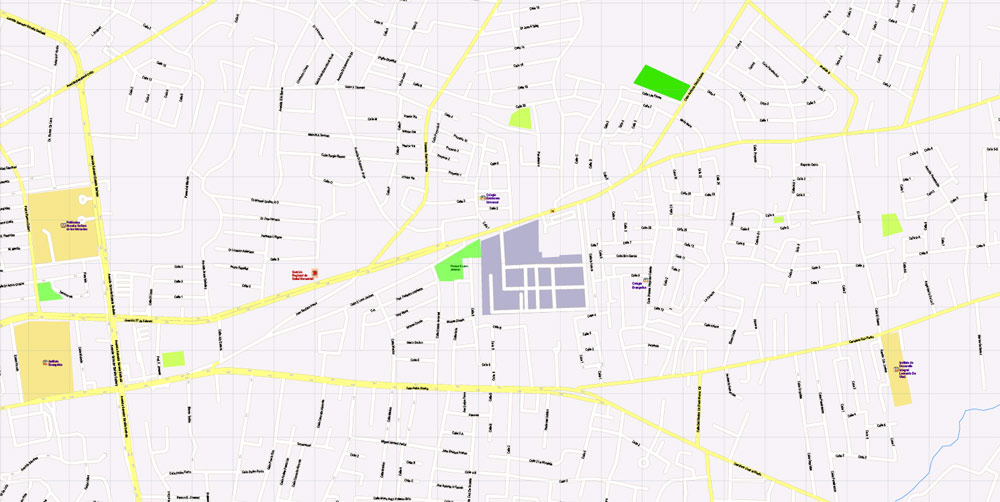 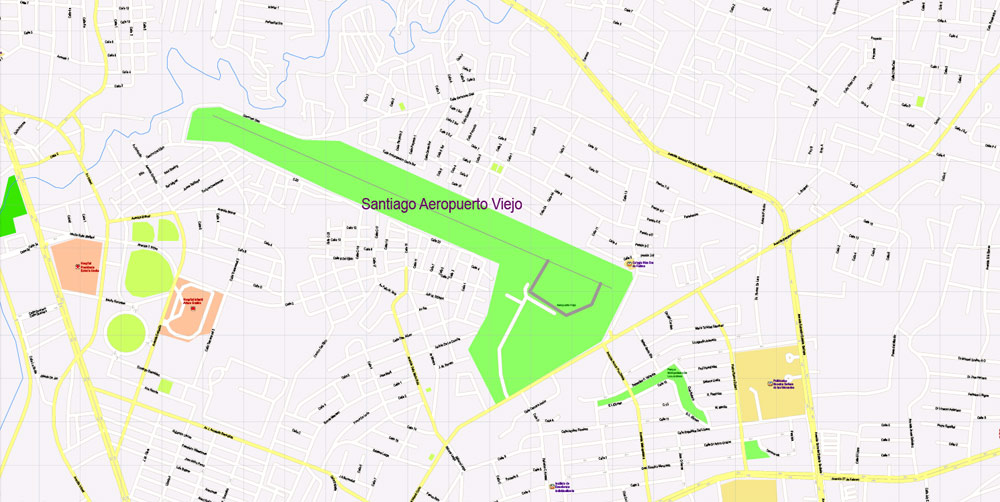 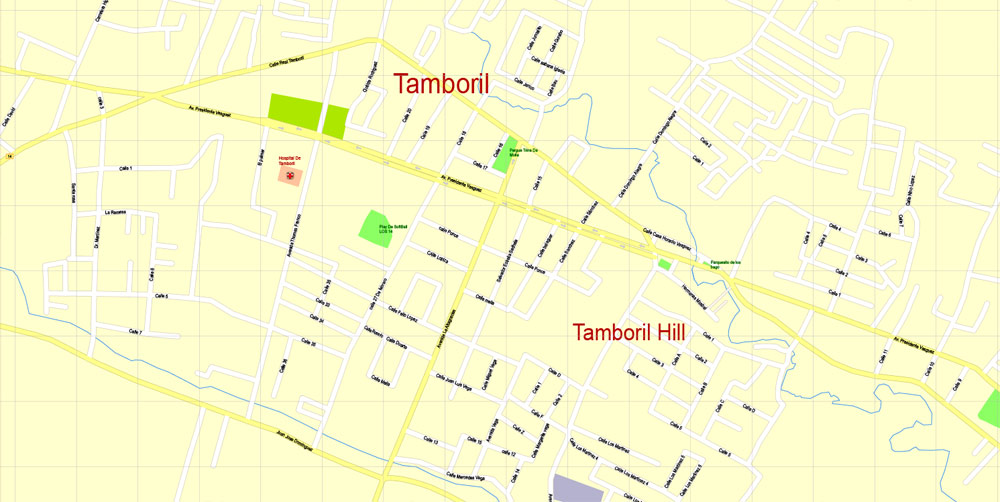 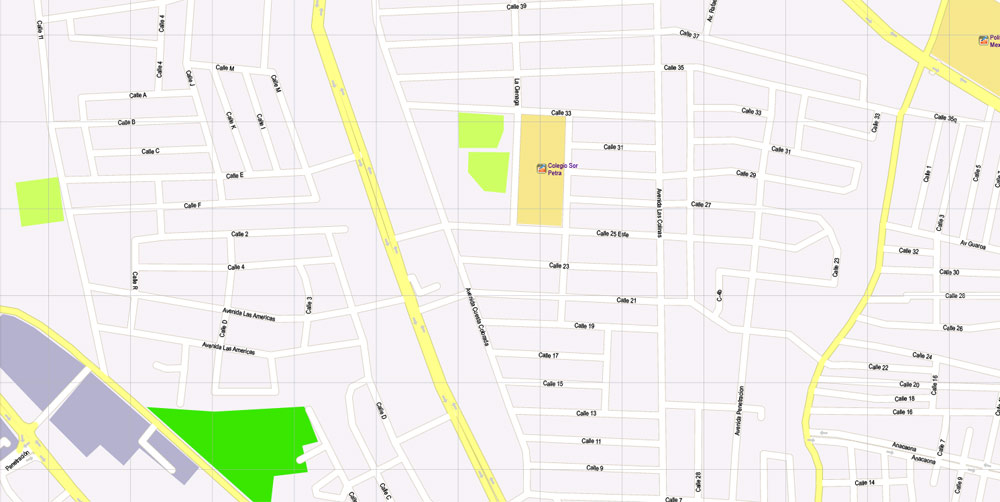 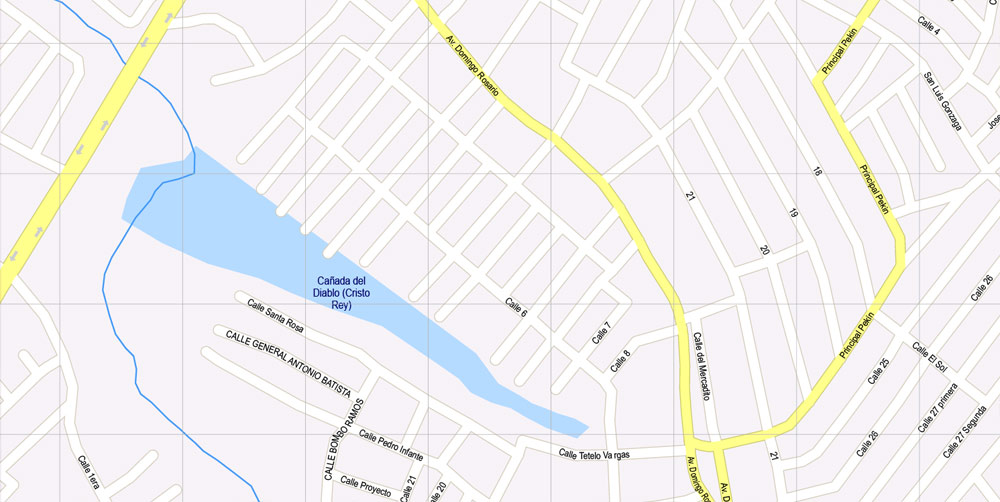 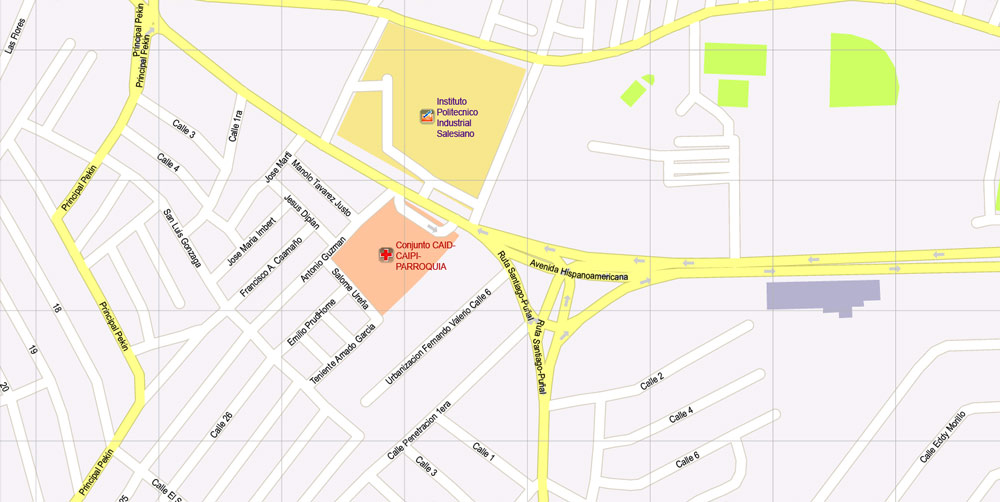 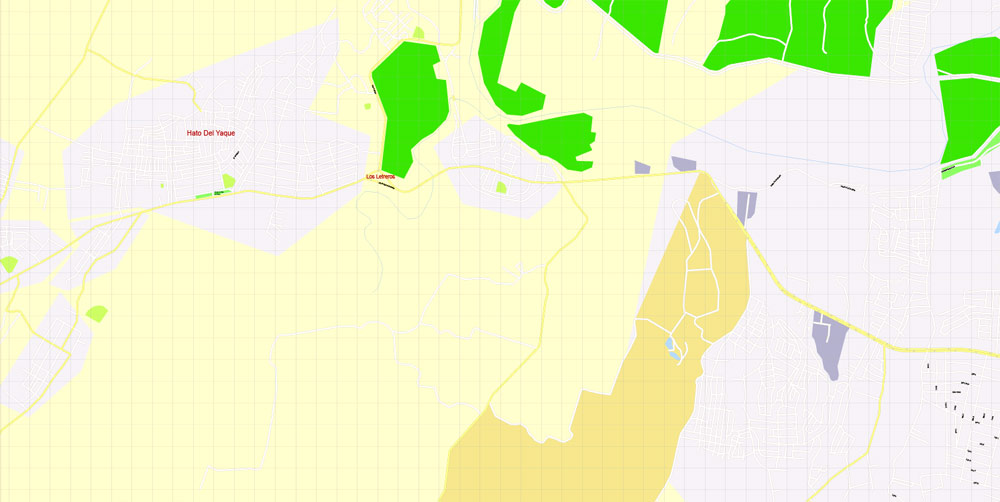 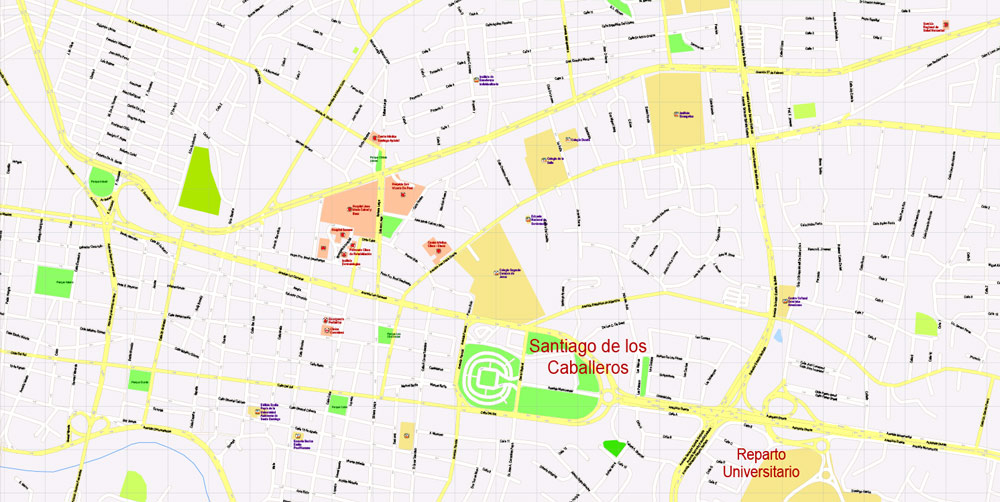 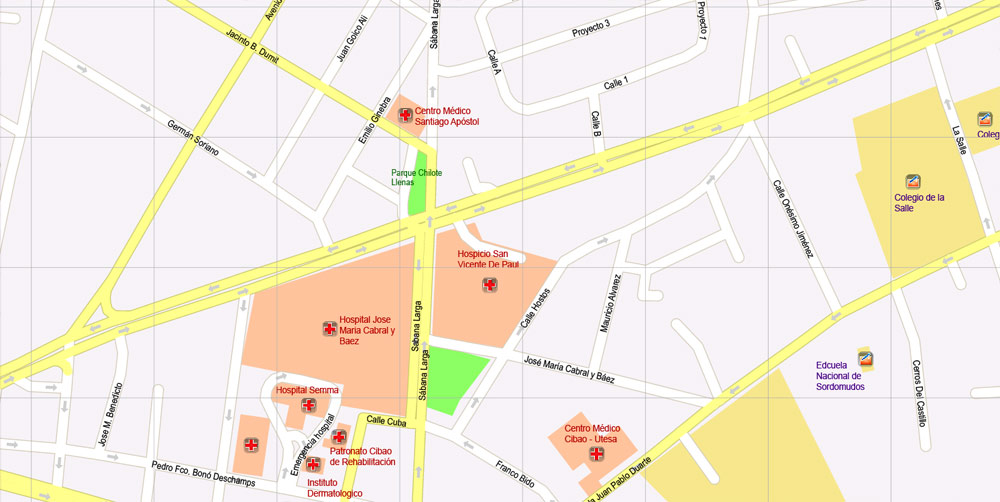 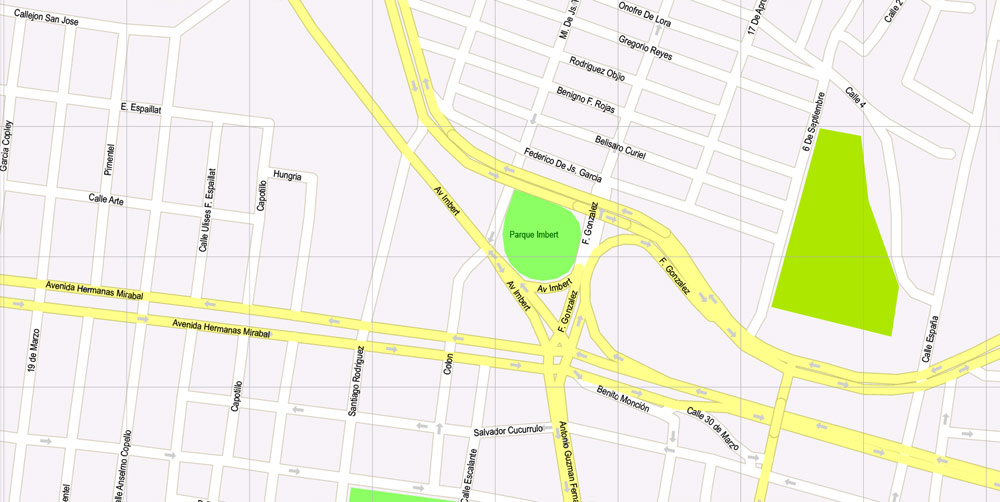 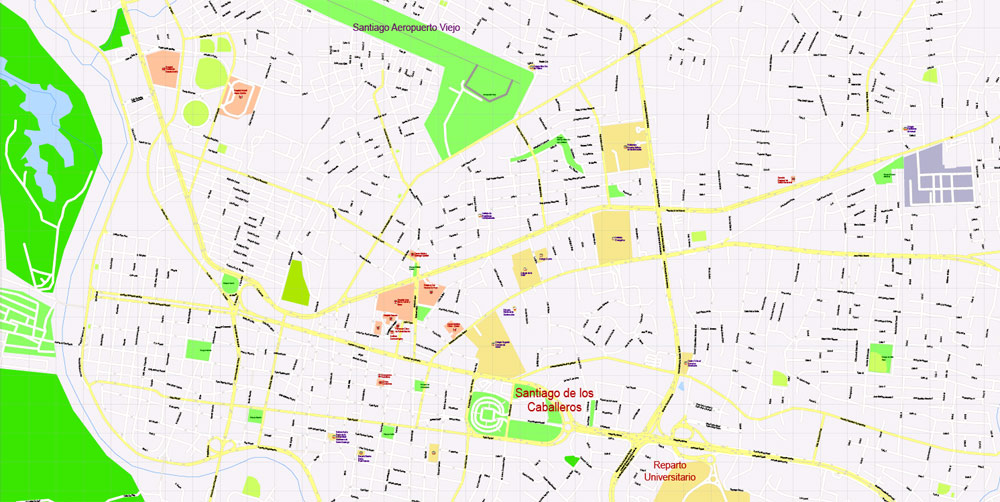 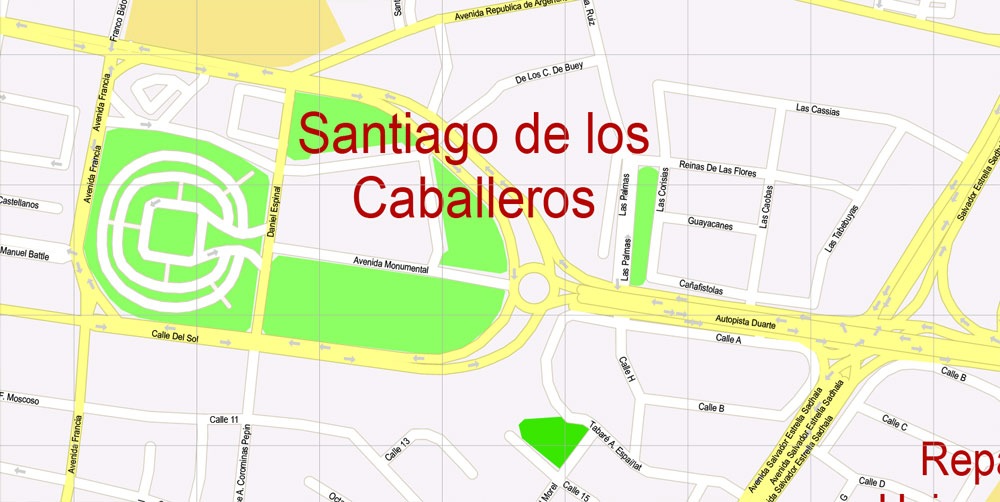 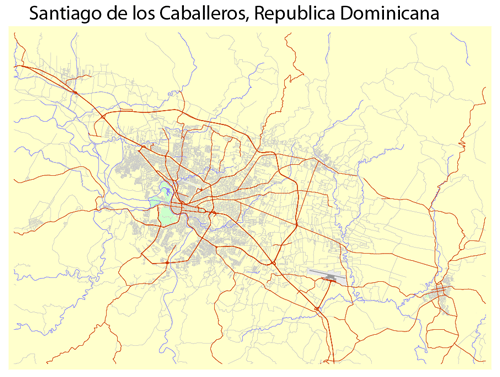 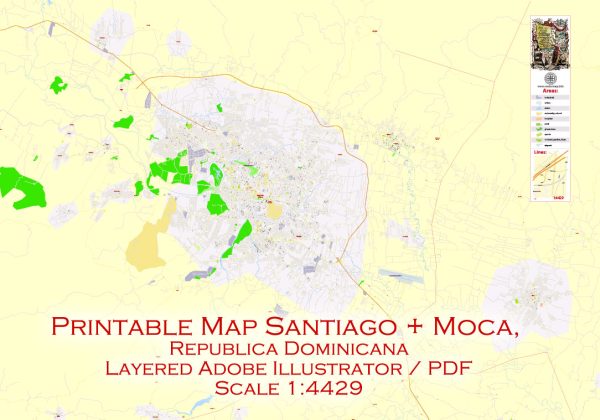 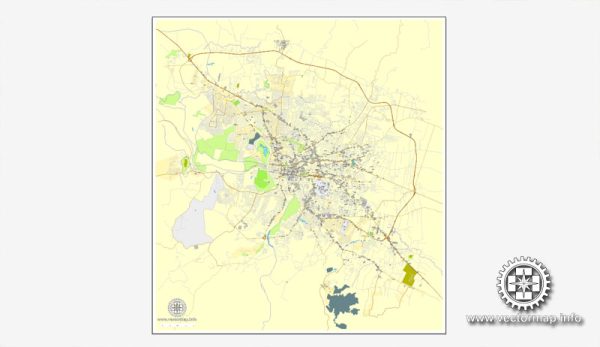