Menlo Park is a city located on the eastern edge of San Mateo County in the San Francisco Bay Area in California in the United States. It is bordered by San Francisco Bay to the north and east; East Palo Alto, Palo Alto, and Stanford to the south; and Atherton, North Fair Oaks, and Redwood City to the west. Menlo Park is one of the most educated cities in California and the USA; almost 70% of residents over the age of 25 have a bachelor’s degree or higher. According to the US Census, the population has grown to 34,698 residents by 2019. Facebook is headquartered in the city, and it was here that Google and Round Table Pizza were founded. 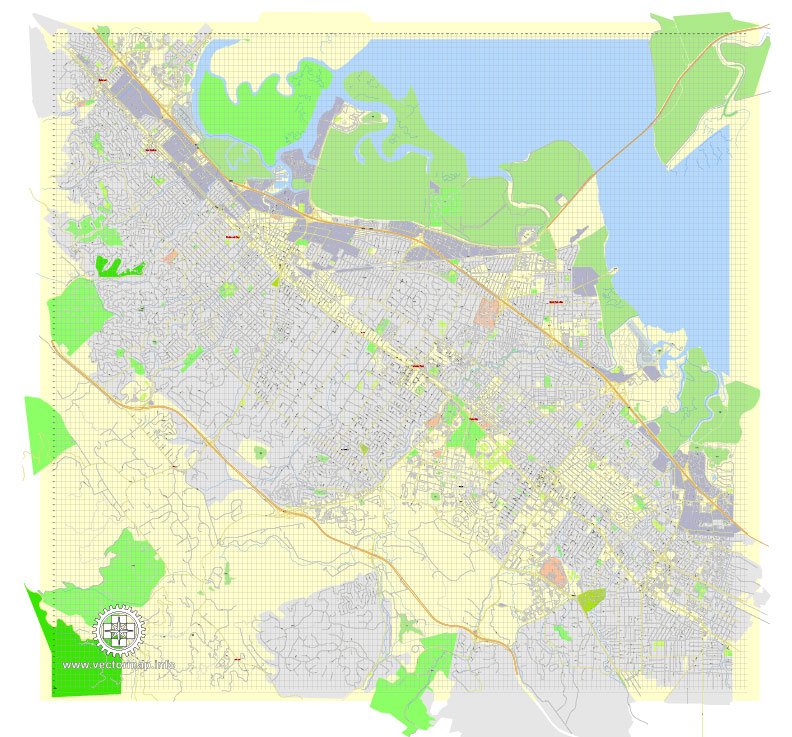 Geography
According to the United States Census Bureau, the city has a total area of 17.4 square miles (45 km2), of which 9.8 square miles (25 km2) is land and 7.6 square miles (20 km2) is covered by water. Menlo Park is long and narrow on an axis from northeast to southwest. The northeast portion borders San Francisco Bay and includes the Dumbarton Bridge, which connects Menlo Park with Fremont on the east side of the Bay. The city’s coastline includes the city’s largest park, the Bedwell Bayfront Park (160 acres (65 ha)), and the Don Edwards San Francisco Bay National Wildlife Refuge. San Francisquito Creek marks most of the southeastern border of the city. West Menlo Park (not part of the city, despite its name) along the Alameda de las Pulgas almost separates the southwestern part of the city (known as Sharon Heights) from the rest. The extreme southwest is bounded by Interstate 280.

The Bayshore Freeway (part of U.S. Route 101) runs into Menlo Park northwest-southeast near the shoreline and somewhat parallel to it southwest of El Camino Real. The intersection of El Camino Real and Santa Cruz Avenue is considered the heart of the city. Nearby, the administrative center of Menlo Park is bounded by Ravenswood Avenue, Alma Street, Laurel Street, and Burgess Drive. It contains council offices, a library, a police station, and Burgess Park, which has various recreational facilities. Other major roads include Sand Hill Road in the Sharon Heights neighborhood.

The residential quarters of Menlo Park can be unofficially divided into several territories. From “east” (northeast to San Francisco Bay) to “west” (southwest to the Pacific Coast), they are defined by Palo Alto Weekly as Belle Haven is the only area east of Route 101; most of the rest of the area is commercial or protected land. Between 101 and roughly parallel Middlefield Road are the neighborhoods of Willows, Suburban Park, Lorelei Estate, Flooded Triangle, Vintage Oaks, and south of the Seminary (the Seminary is St. Patrick’s Seminary). The Caltrain and Felton Gables, Linfield Oaks, and Park Forest run between Middlefield and El Camino Real. West of El Camino to the foothills of the Semi-Islands is the neighborhoods of Downtown Menlo Park, Central Menlo Park, and Allied Arts (sometimes also known as Stanford Park, it is named after the Guild of Allied Arts). On the hills are Sharon Heights and Stanford Hills. Several other neighborhoods are closely connected to Menlo Park, but are actually located in unincorporated San Mateo County; These include Menlo Oaks and Fair Oaks (the latter part of the North Fair Oaks census area) between Bayshore and Middlefield, University Heights (also known as West Menlo Park) between Sharon Heights and most of the rest of the city, and Stanford Weekend Acres, which is located near Stanford Hills.

History
Menlo Park was originally settled by the Ohlone Indian tribe when the PORTOLA expedition arrived in 1769
In 1795, Rancho de las Pulgas received a plot of land that included the territory of the current city.
In 1851, two Irish immigrants, Dennis J. Oliver and his brother-in-law, D.C. McGlynn, bought a 1,700-acre (690 ha) plot of land on the former Rancho de las Pulgas. In 1854, they erected a gate with a wooden arch with the inscription “Menlo Park” and the date “August 1854” at the entrance to their property (now the intersection of Middle Avenue and El Camino Real). The word “Menlo” comes from the name of the former home of the owners of Menlo (or Menloha) in County Galway, Ireland, and is an Anglicized version of the original Irish name of this place, Mionloch, which means “middle lake”.

In 1863, the San Francisco and San Jose Rail Road built a railroad from San Francisco to Mayfield (now the California Avenue station in Palo Alto) and began running trains in the area. They named the nearby station “Menlo Park” after the sign. The 1867 station building still stands on the platform of the current Caltrain station used by the local Chamber of Commerce. It is the oldest continuously operating train station in California. The city of Menlo Park grew up around this station and became a popular home for San Francisco businessmen. The post office was founded in 1870, and the town was incorporated in 1874 (disbanded two years later, but was later recognized as a city forever in 1927). The original arch, which gave the name to the stations and eventually to the city, lasted until 1922 when the original arch was destroyed in a car accident.

In 1917-1918, most of Menlo Park was the site of Camp Fremont, a training camp for 27,000 men sent to fight during World War I. It didn’t last long (the camp was dismantled after the war), but Army engineers paved the first streets in Menlo Park and laid the first water and gas lines. The Army retained the camp hospital, and it is now the location of the Veterans Affairs Administration Hospital on Willow Road in Menlo Park. In the fall of 1918, a flu pandemic struck Camp Fremont, resulting in the deaths of 147 people.

At the beginning of World War II, the U.S. government bought Timothy Hopkins’ 260-acre (110 ha) estate from his widow and established Palo Alto General Hospital, later renamed Dibble General Hospital (in honor of the deceased Colonel John Dibble). in 1943). After the end of the war, part of the land was sold to the city and became the location of the main library and the town hall. Most of the land was purchased by Stanford University to accommodate students, whose number increased dramatically due to the bill and the demobilization of military personnel; The area was known as “Stanford Village“, which existed as a student dormitory until the mid-1960s. The Stanford Research Institute (now SRI International) has also been located on this land since 1947; between 1955 and 1968 SRI bought the rest of Stanford Village.

In 2015, the Menlo Park Historical Association (MPHA) began a project to raise funds and build a replica of the original Menlo Park Gate. The chosen location was at 800 Alma Street, opposite the Menlo Park Public Library. The replica was completed in 2019. On March 17, 2019, Menlo Park Mayor Ray Muller officially unveiled a reproduction of the famous old Menlo Park Gate. 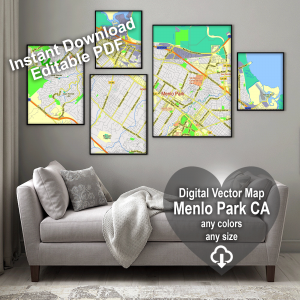 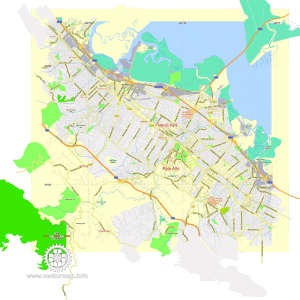 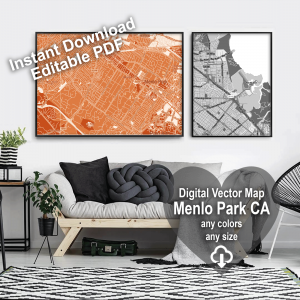 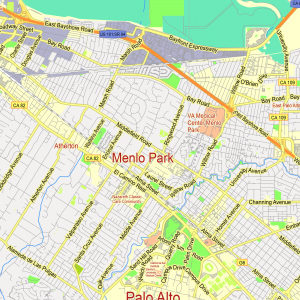 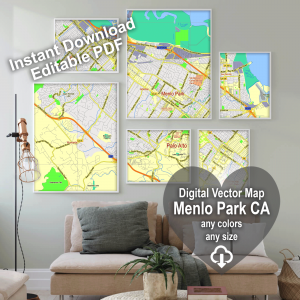 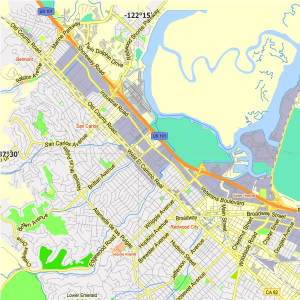 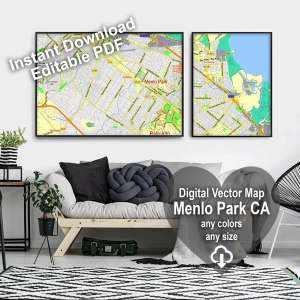 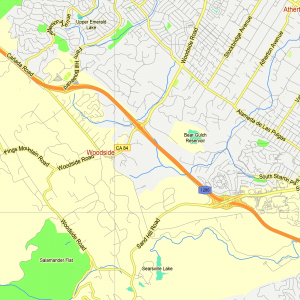 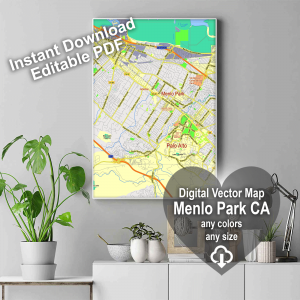 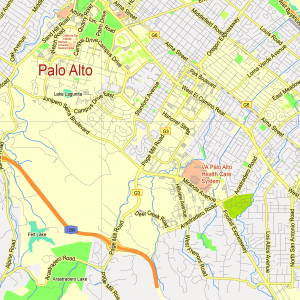 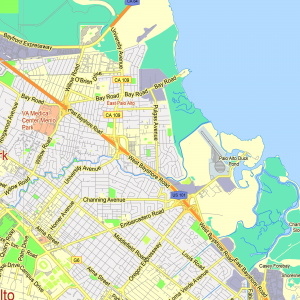