This vector map of Rio de Janeiro city is used as a basis for design, editing, and further printing.

This is the most detailed, exact map of Rio de Janeiro city for high-quality printing and polygraphy. You can always clarify the map development date by contacting us.
For your convenience, all objects on Rio de Janeiro vector city map are divided into layers. And the editing is very easy – colors, lines, etc. 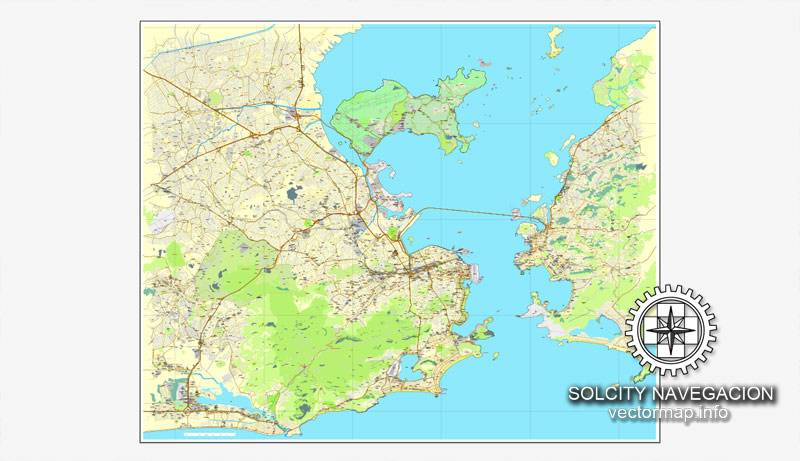 One of the advantages of Rio de Janeiro city vector maps of our production is the relevance of cartographic data, we constantly update all our products.

This vector map of Rio de Janeiro city is used by:
designers, layout designers, printers, advertisers and architects. Our product – vector maps – is designed for further editing and printing in large formats – from @Wall format (a few meters) to A-0 and A-1, A-2, A-3.

The advertising and presentation map of Rio de Janeiro city (usually the final designer marks the routes, and puts the client’s objects (shops, saloons, gas stations etc.)
The undoubted advantage is that people will NEVER throw out this advertising product – the map. In fact, as an advertising medium, a city map is the most “long-playing” of the well-known polygraphic advertising media, with the longest lifespan, and the maximum number of interactions with the customer. 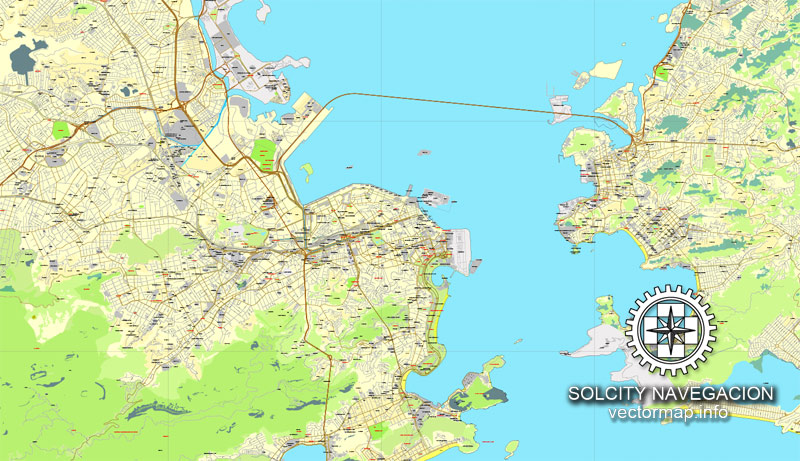 Take a look, who purchases our vector maps of Rio de Janeiro city in “Our Clients and Friends” page – these are large and small companies, from super-brands like Volvo and Starbucks, to small design studios and printing houses.
It’s very easy to work with vector maps of Rio de Janeiro city, even for a not very experienced designer who can turn on and off the map layers, add new objects, change the colors of fill and lines according to customer requirements.

The undoubted advantage of Rio de Janeiro city vector maps in printing is an excellent and detailed visualization, when customer can expand a large paper map and instantly define his location, find a landmark, an object or address on map, unlike using the popular electronic formats of Google and Yandex maps for example. 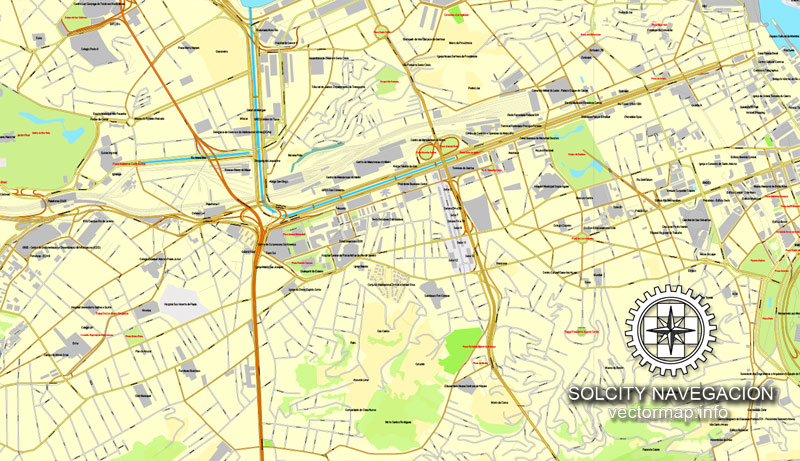 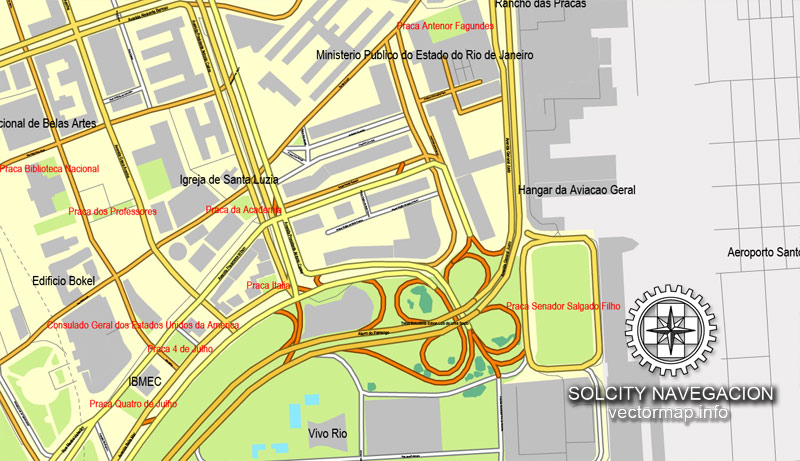 You will probably want to change the color scheme used on our Rio de Janeiro vector city map.

If you have selected a part or a layer of Rio de Janeiro city vector map and open the dialog box by clicking the icon in the Control panel, on the Samples palette or the Color Catalog, or if you choose Edit > Edit Colors> Repaint Graphic Object, then the «Repaint Graphic Object» dialog box appears, and you get access to «Assign» and «Edit» tabs.

Rio de Janeiro has the second largest municipal GDP in the country, and 30th largest in the world in 2008, estimated at about R$343 billion (IBGE, 2008) (nearly US$201 billion). It is headquarters to Brazilian oil, mining, and telecommunications companies, including two of the country’s major corporations – Petrobras and Vale – and Latin America’s largest telemedia conglomerate, Grupo Globo. The home of many universities and institutes, it is the second-largest center of research and development in Brazil, accounting for 17% of national scientific output according to 2005 data. Despite the high perception of crime, the city has a lower incidence of crime than Northeast Brazil, but it is far more criminalized than the south region of Brazil, which is considered the safest in the country. 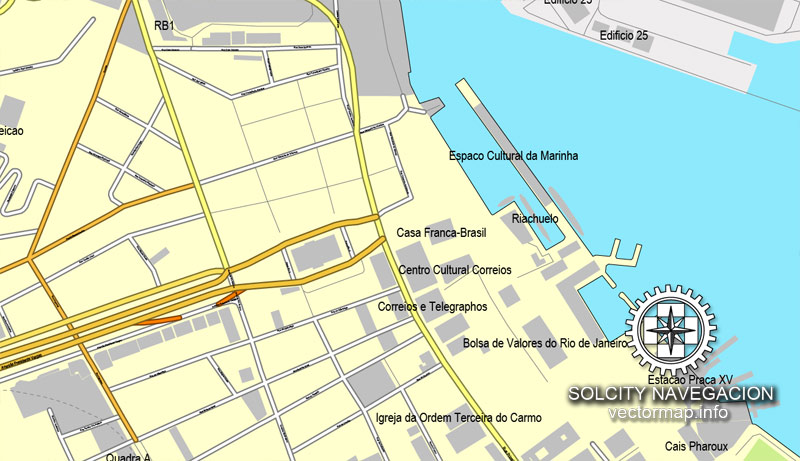 Regardless of the name at the top of the dialog box, the right-hand side always displays the color group of the current document, as well as two default color groups: Print Color and Grayscale. These color groups can be selected and used any time.
Create and edit color groups of Rio de Janeiro city vector map, and also assign colors using the «Edit Colors»/ а «Repaint Graphic Object» dialog box.

Rio de Janeiro is one of the most visited cities in the Southern Hemisphere and is known for its natural settings, Carnival, samba, bossa nova, and balneario beaches such as Barra da Tijuca, Copacabana, Ipanema, and Leblon. In addition to the beaches, some of the most famous landmarks include the giant statue of Christ the Redeemer atop Corcovado mountain, named one of the New Seven Wonders of the World; Sugarloaf Mountain with its cable car; the Sambódromo (Sambadrome), a permanent grandstand-lined parade avenue which is used during Carnival; and Maracanã Stadium, one of the world’s largest football stadiums. Rio de Janeiro was the host of the 2016 Summer Olympics and the 2016 Summer Paralympics, making the city the first South American and Portuguese-speaking city to ever host the events, and the third time the Olympics were held in a Southern Hemisphere city. The Maracanã Stadium held the finals of the 1950 and 2014 FIFA World Cups, the 2013 FIFA Confederations Cup, and the XV Pan American Games. 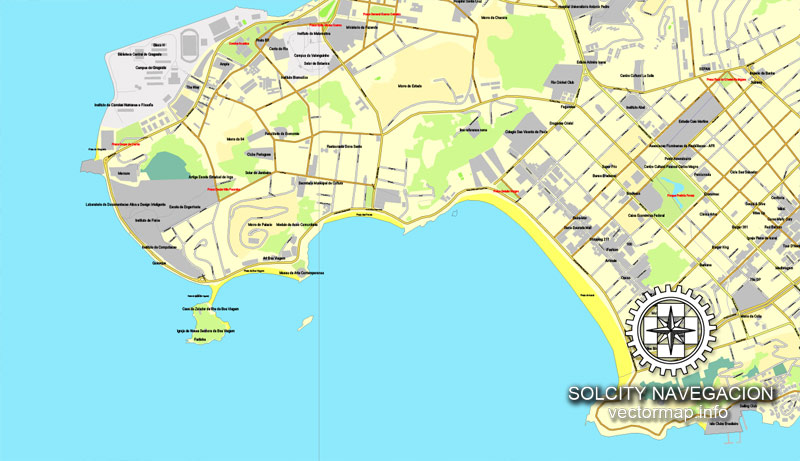 «Edit»
The «Edit» tab is designed to create a new or edit the existing color groups.
The harmony rules Menu and the Color Wheel are used to conduct experiments with color harmonies. The color wheel shows how colors are related in color harmony, and the color bars allow you to view and manipulate an individual color values. In addition, you can adjust the brightness, add and remove colors, save color groups and view colors on the selected Vector Map of Rio de Janeiro city or a separated layers.

«Assign»
The «Assign» tab is used to view and control on how the original colors are replaced with colors from the color group like your corporate colors in the Vector Map of Rio de Janeiro city.

The assign color ability is provided only if the entire map, layer or fragment is selected in the document. You can specify which of new colors replace the current colors, whether the spot colors should be preserved and how colors are replaced (for example, you can replace colors completely or changing the color tone while maintaining the brightness). The «Assign» tab allows you to redefine colors in the Vector Map of Rio de Janeiro city, or in separate layers and fragments using the current color group or reducing the number of colors in the current Vector Map. 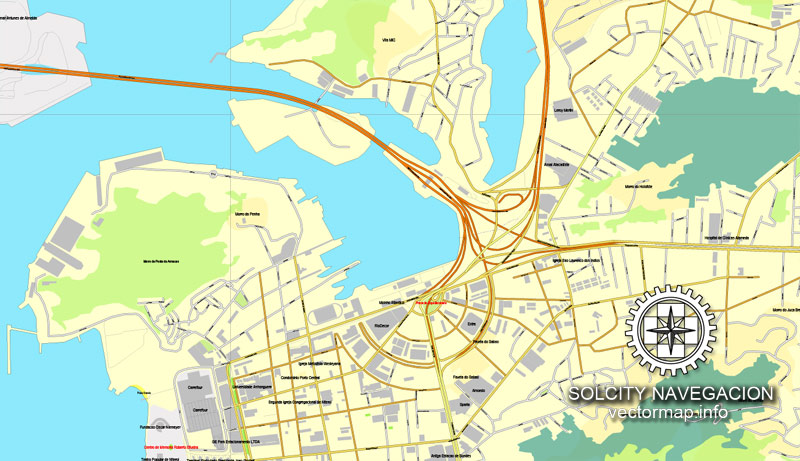 Use these commands if you need to edit the colors in the selected vector map of Rio de Janeiro city.

Geography
Rio de Janeiro is on the far western part of a strip of Brazil’s Atlantic coast (between a strait east to Ilha Grande, on the Costa Verde, and the Cabo Frio), close to the Tropic of Capricorn, where the shoreline is oriented east–west. Facing largely south, the city was founded on an inlet of this stretch of the coast, Guanabara Bay (Baía de Guanabara), and its entrance is marked by a point of land called Sugar Loaf (Pão de Açúcar) – a “calling card” of the city. 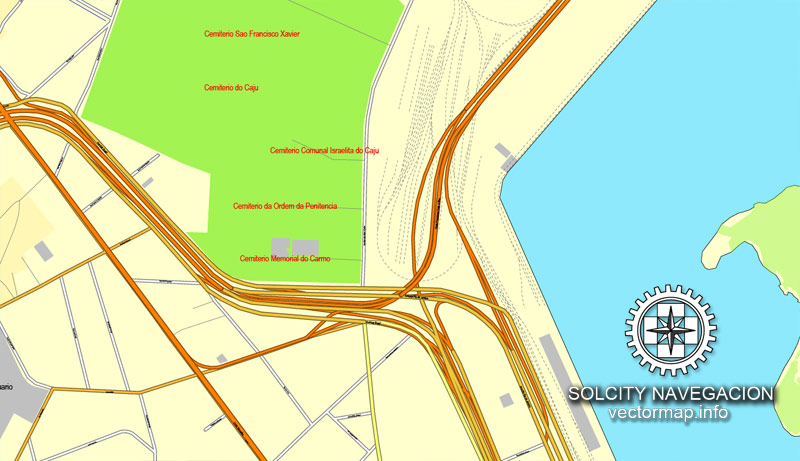 Note. This color editing method is convenient for global color adjustment in a vector map, if global colors were not used when creating a City Map of Rio de Janeiro.

Click this button if you need to edit colors on the «Color Catalog» palette or edit and then apply them to the selected Vector Map of Rio de Janeiro city or its fragment.

Click this button if you need to edit the colors in the specific color group or edit and apply them to the selected Vector Map of Rio de Janeiro city or a group of its elements, for example, the whole layer “Streets and lines”. You can also double-click the color group in the Samples panel to open the dialog box. 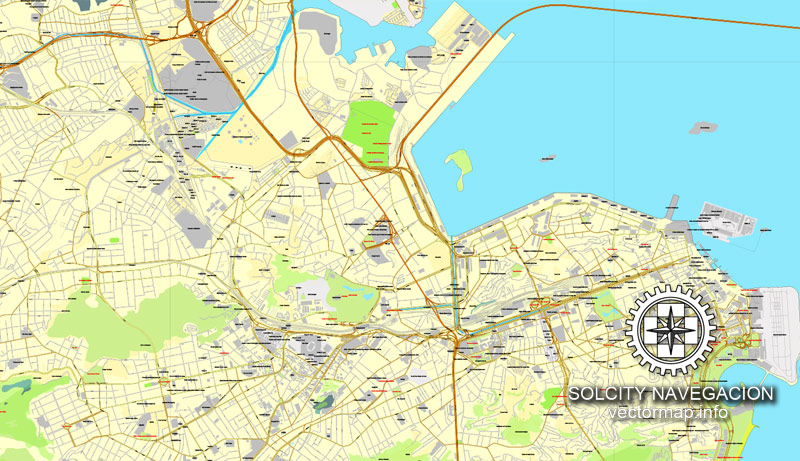 The Centre (Centro), the core of Rio, lies on the plains of the western shore of Guanabara Bay. The greater portion of the city, commonly referred to as the North Zone (Zona Norte), extends to the northwest on plains composed of marine and continental sediments and on hills and several rocky mountains. The South Zone (Zona Sul) of the city, reaching the beaches fringing the open sea, is cut off from the Centre and from the North Zone by coastal mountains.

These mountains and hills are offshoots of the Serra do Mar to the northwest, the ancient gneiss-granite mountain chain that forms the southern slopes of the Brazilian Highlands. The large West Zone (Zona Oeste), long cut off by the mountainous terrain, had been made more easily accessible to those on the South Zone by new roads and tunnels by the end of the 20th century. 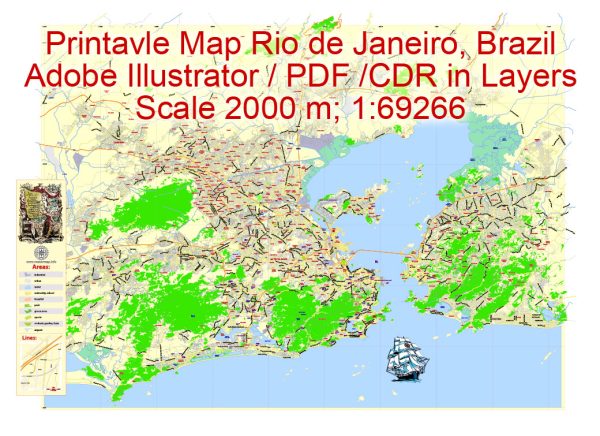 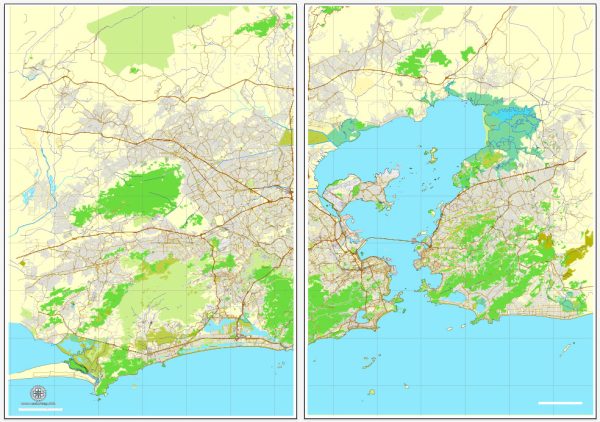 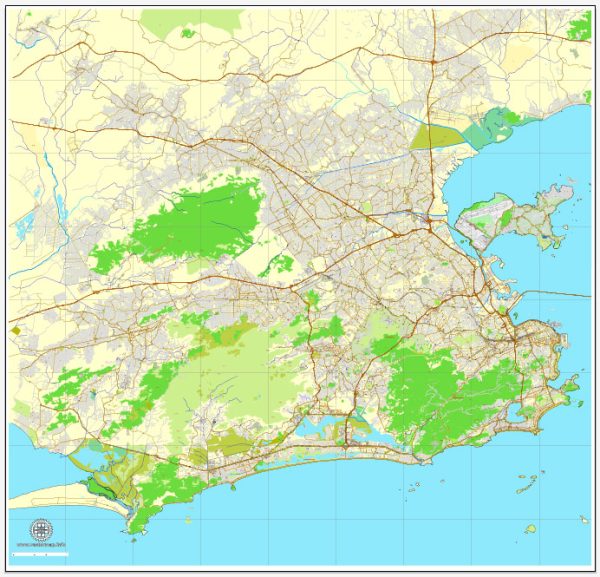