This vector map of Cincinnati city is used as a basis for design, editing, and further printing.

This vector map of Cincinnati city is used by:
designers, layout designers, printers, advertisers and architects. Our product – vector maps – is designed for further editing and printing in large formats – from @Wall format (a few meters) to A-0 and A-1, A-2, A-3. 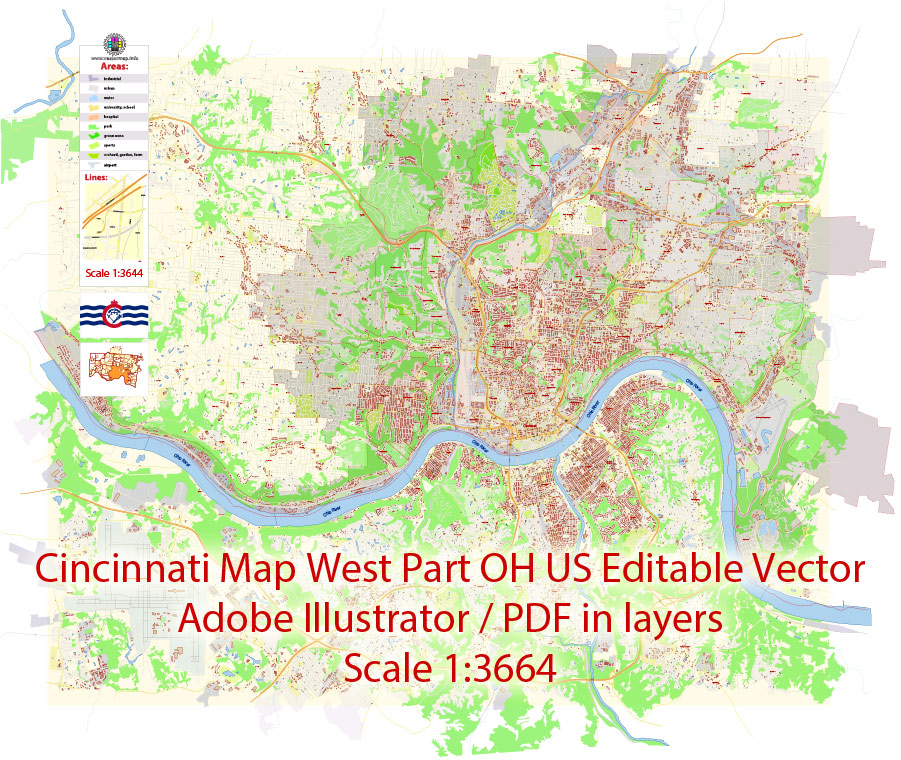 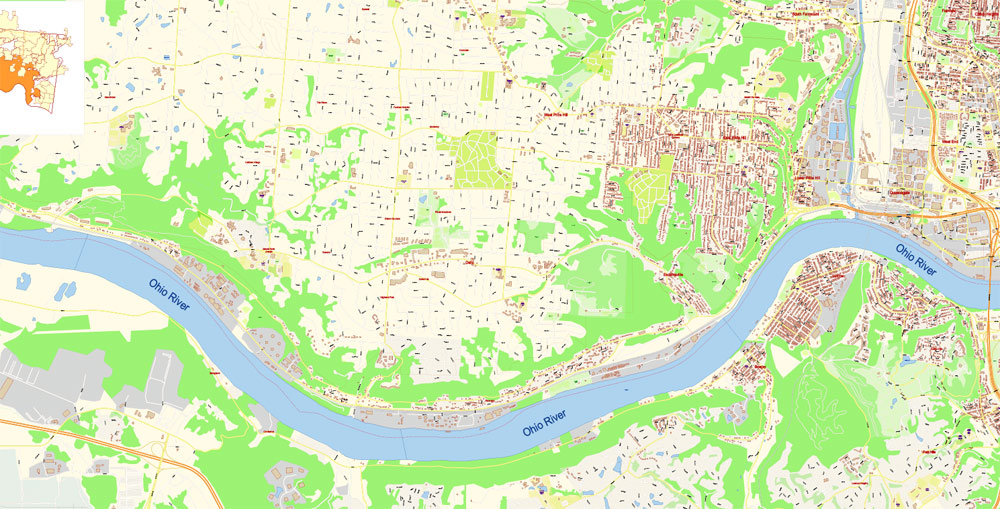 Take a look, who purchases our vector maps of Cincinnati city in “Our Clients and Friends” page – these are large and small companies, from super-brands like Volvo and Starbucks, to small design studios and printing houses.

It’s very easy to work with vector maps of Cincinnati city, even for a not very experienced designer who can turn on and off the map layers, add new objects, change the colors of fill and lines according to customer requirements. 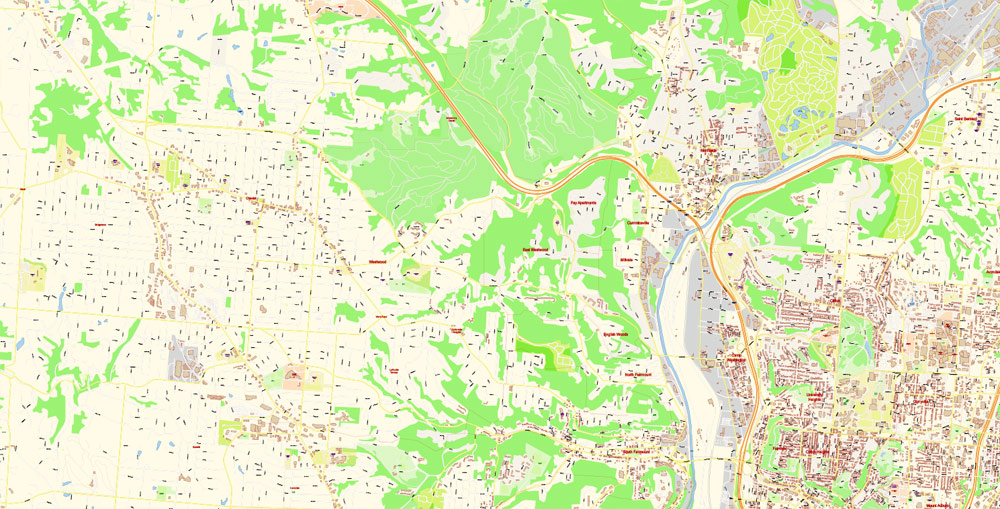 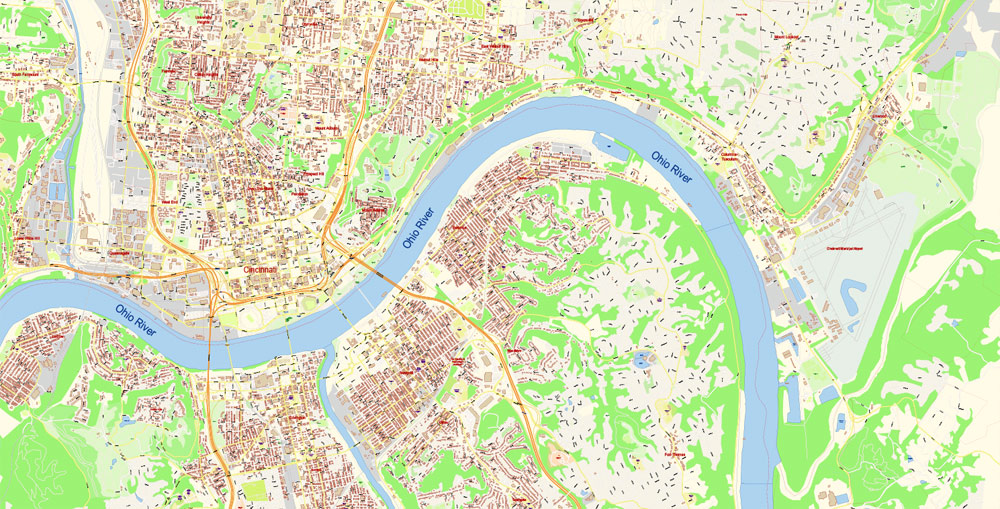 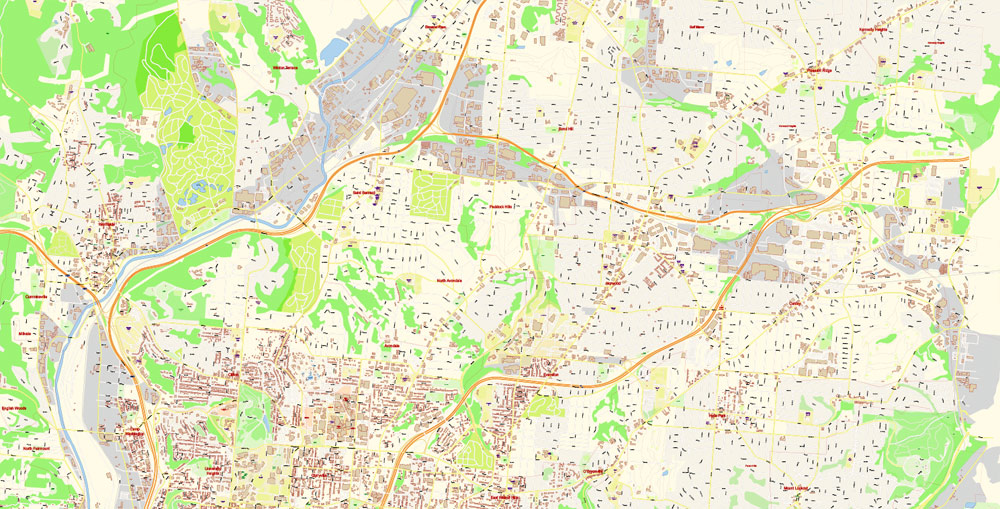 Cincinnati developed with fewer immigrants and less influence from Europe than east coast cities in the same period. However, it received a significant number of German immigrants, who founded many of the city’s cultural institutions.

You will probably want to change the color scheme used on our Cincinnati vector city map. 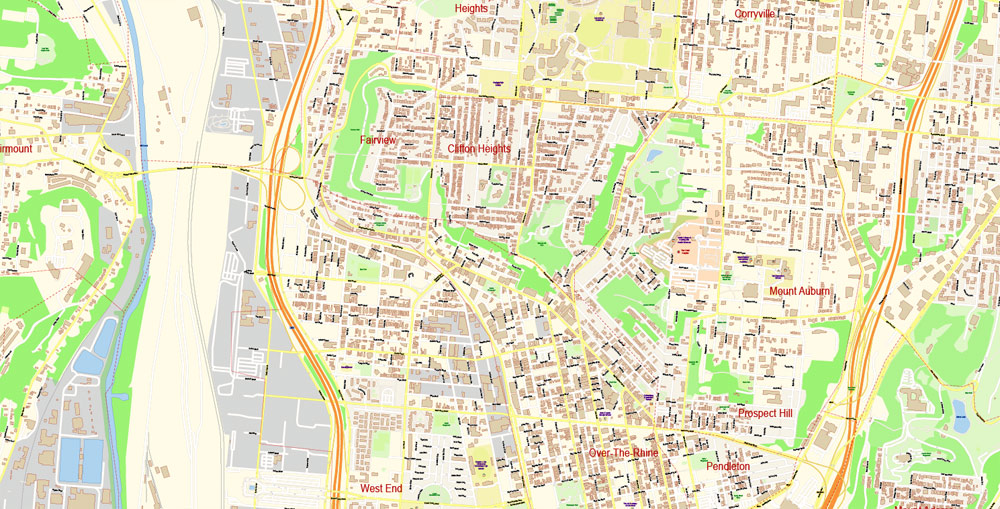 By the end of the 19th century, with the shift from steamboats to railroads drawing off freight shipping, trade patterns had altered and Cincinnati’s growth slowed considerably. The city was surpassed in population by other inland cities, particularly Chicago, which developed based on strong commodity exploitation, economics, and the railroads, and St. Louis, which for decades after the Civil War served as the gateway to westward migration. 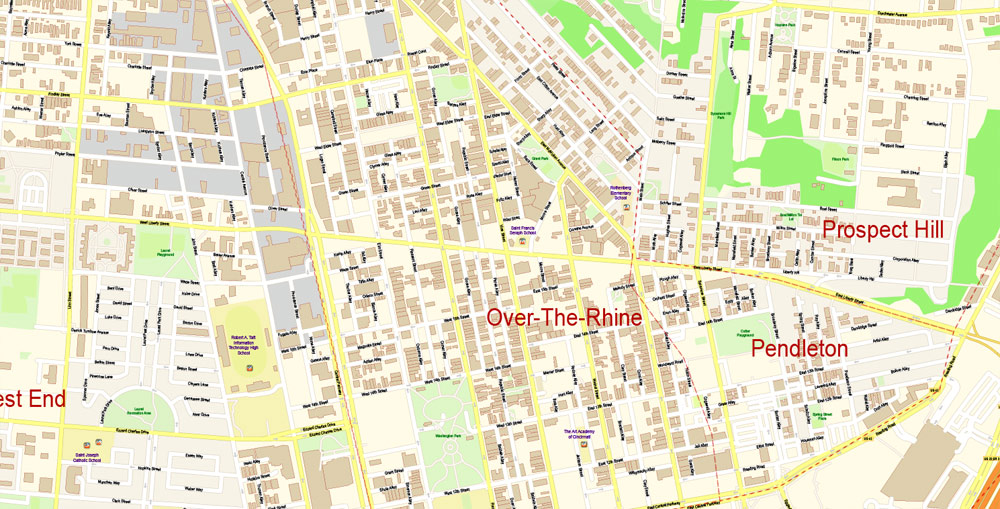 Cincinnati is home to three major sports teams: the Cincinnati Reds of Major League Baseball; the Cincinnati Bengals of the National Football League; and FC Cincinnati, currently playing in the second division United Soccer League but moving to Major League Soccer (Division 1) in 2019. The city’s largest institution of higher education, the University of Cincinnati, was founded in 1819 as a municipal college and is now ranked as one of the 50 largest in the United States. 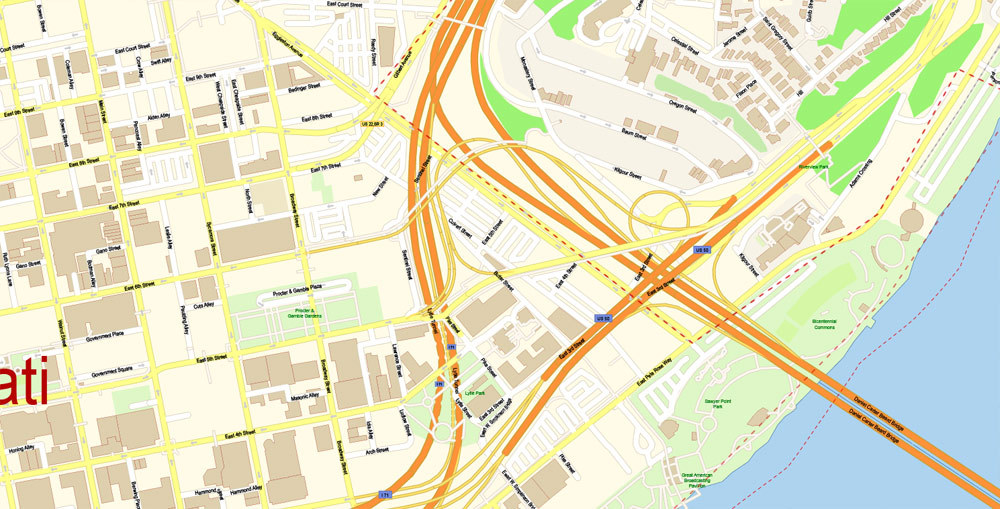 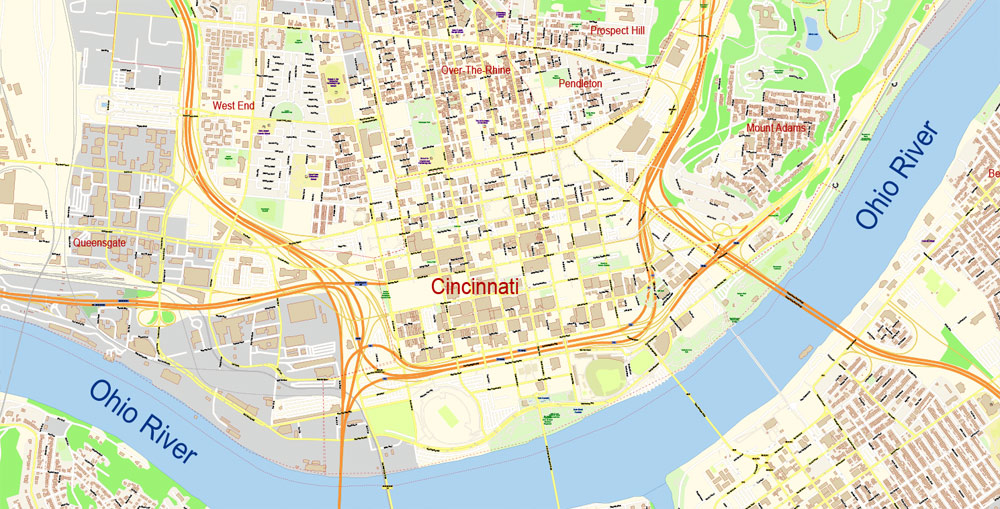 «Edit»
The «Edit» tab is designed to create a new or edit the existing color groups.
The harmony rules Menu and the Color Wheel are used to conduct experiments with color harmonies. The color wheel shows how colors are related in color harmony, and the color bars allow you to view and manipulate an individual color values. In addition, you can adjust the brightness, add and remove colors, save color groups and view colors on the selected Vector Map of Cincinnati city or a separated layers.

«Assign»
The «Assign» tab is used to view and control on how the original colors are replaced with colors from the color group like your corporate colors in the Vector Map of Cincinnati city. 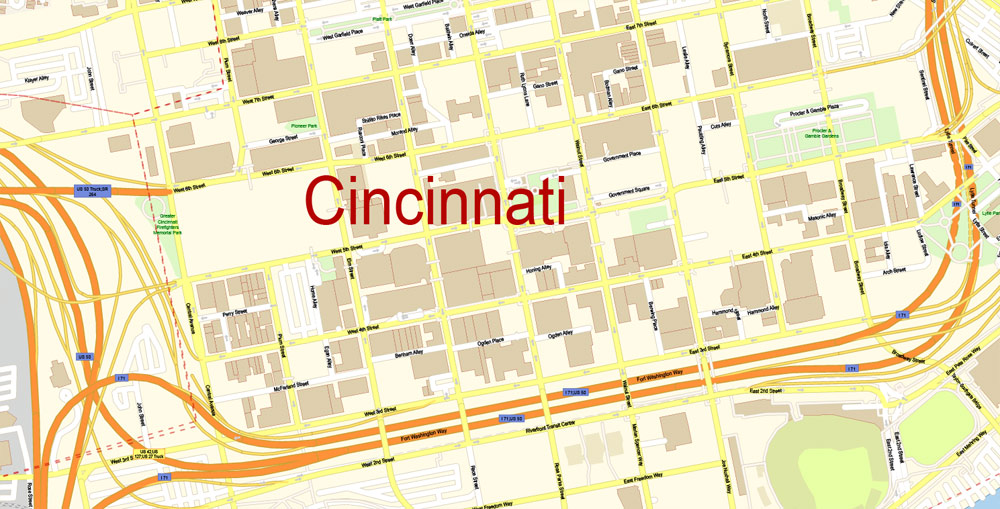 The assign color ability is provided only if the entire map, layer or fragment is selected in the document. You can specify which of new colors replace the current colors, whether the spot colors should be preserved and how colors are replaced (for example, you can replace colors completely or changing the color tone while maintaining the brightness). The «Assign» tab allows you to redefine colors in the Vector Map of Cincinnati city, or in separate layers and fragments using the current color group or reducing the number of colors in the current Vector Map. 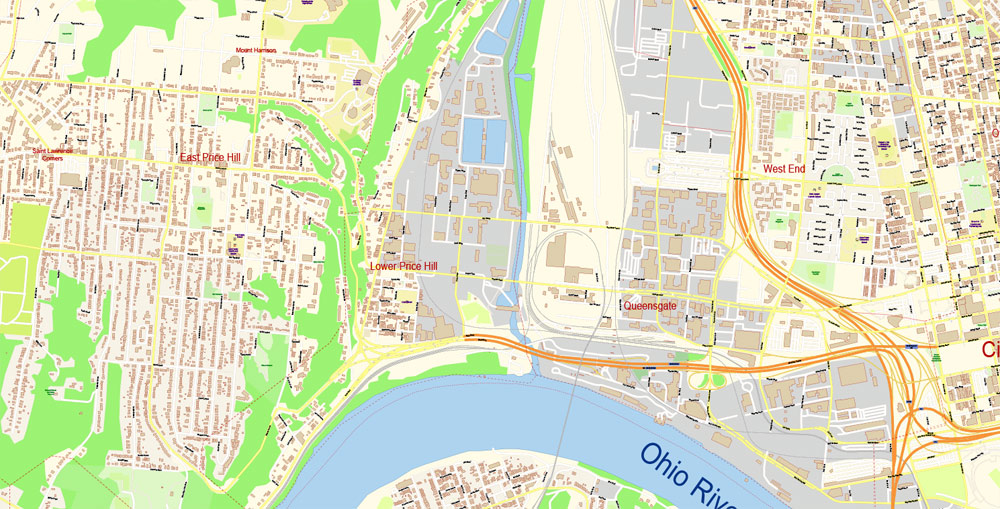 Any color group can be selected and edited, or used to redefine the colors in the selected vector map of Cincinnati city, its fragments or elements. 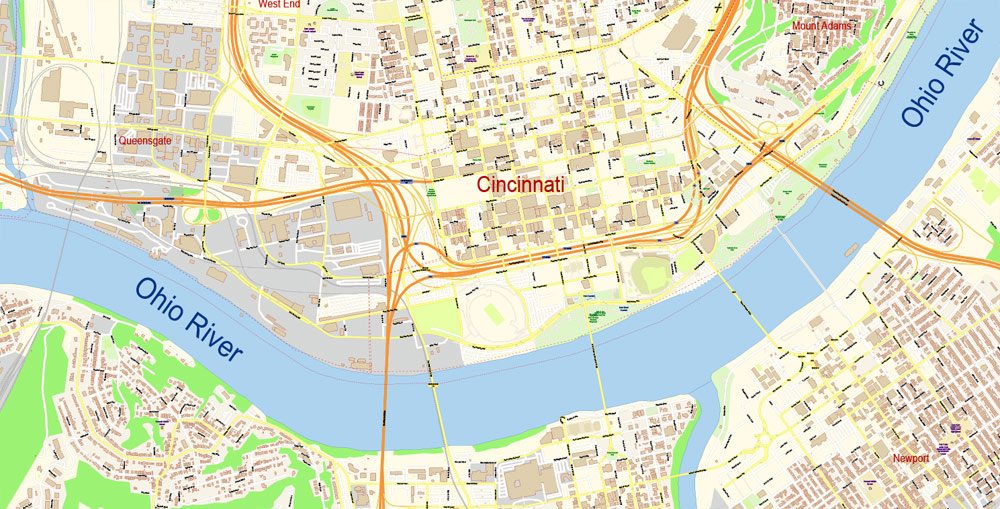 Use these commands if you need to edit the colors in the selected vector map of Cincinnati city.

«Repaint Graphic object» button on the «Control» panel.
Use this button if you need to adjust colors of Cincinnati city vector map using the а «Repaint graphic object» dialog box. 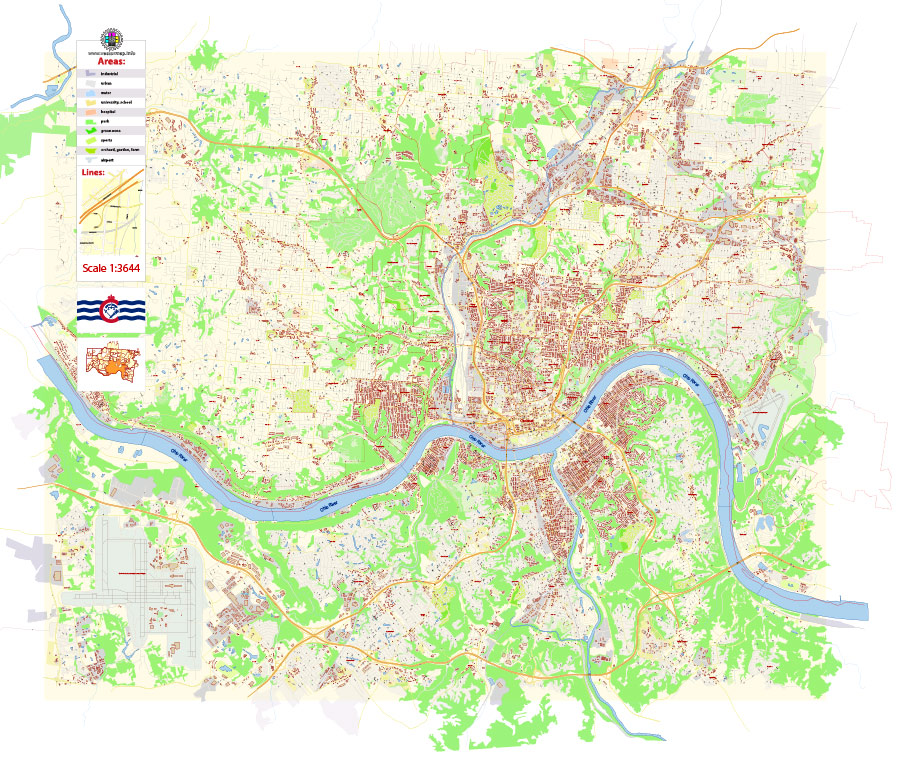 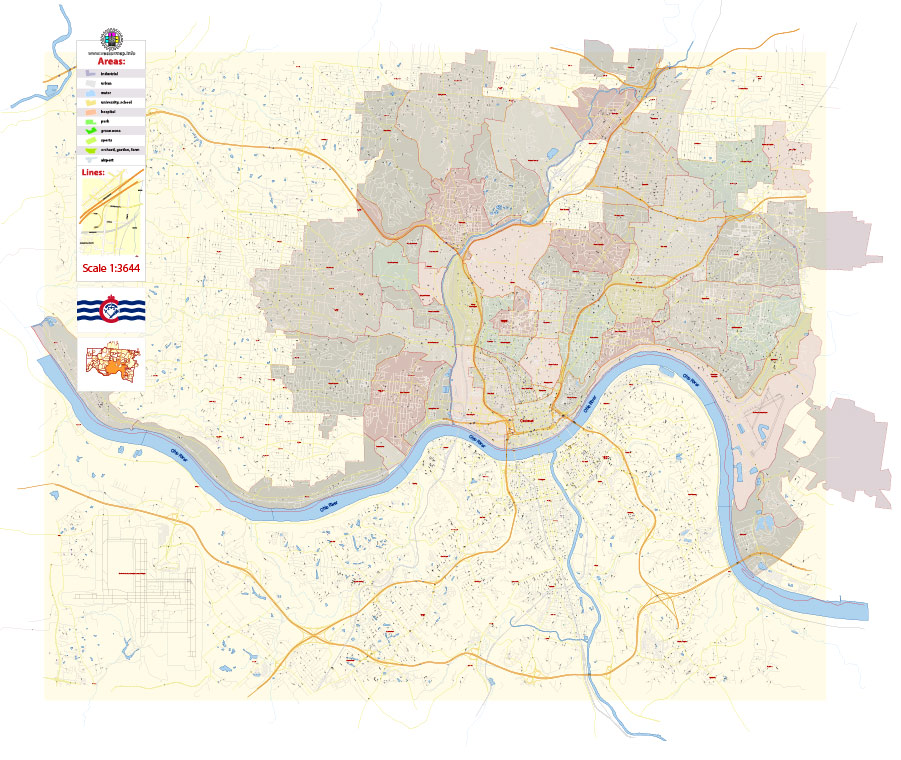 Cincinnati
City in Ohio
Cincinnati is a city in Ohio, on the Ohio River. The Over-the-Rhine district is known for its 19th-century architecture, including Findlay Market, which has food and craft vendors. To the north is the Cincinnati Zoo & Botanical Garden. The Cincinnati Museum Center encompasses history, science and children’s museums in the art deco Union Terminal. Works spanning 6,000 years are on display at the Cincinnati Art Museum. 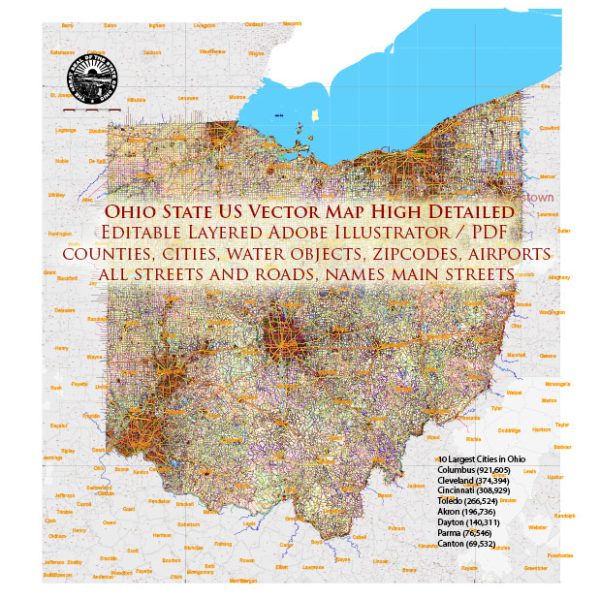 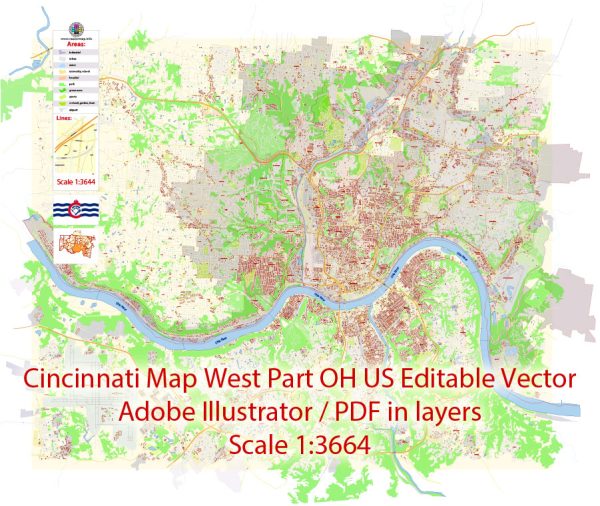 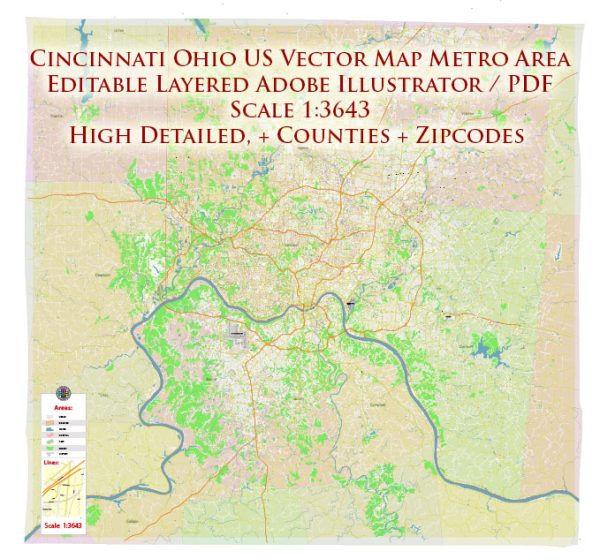 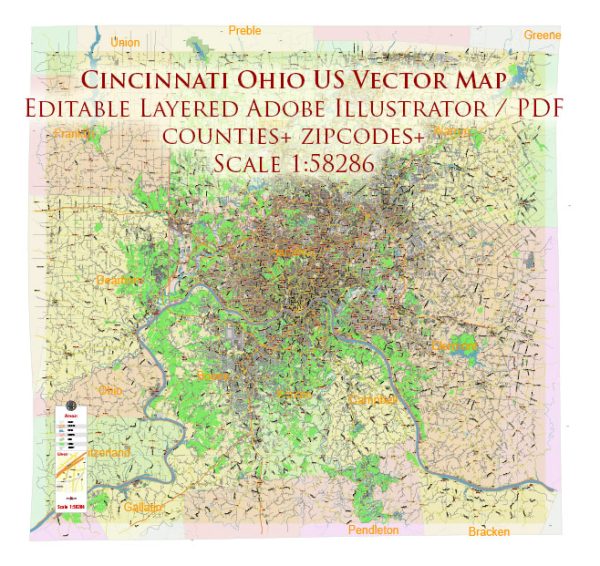