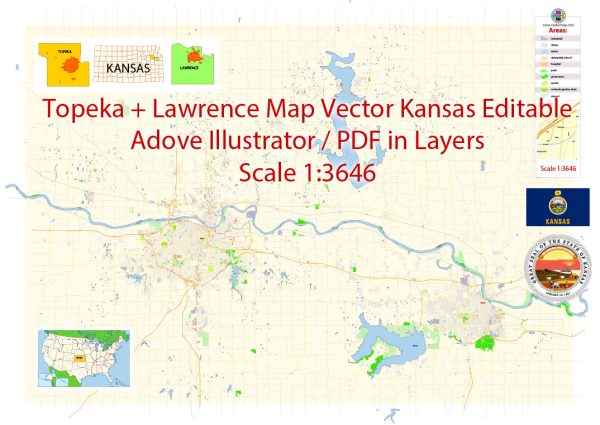 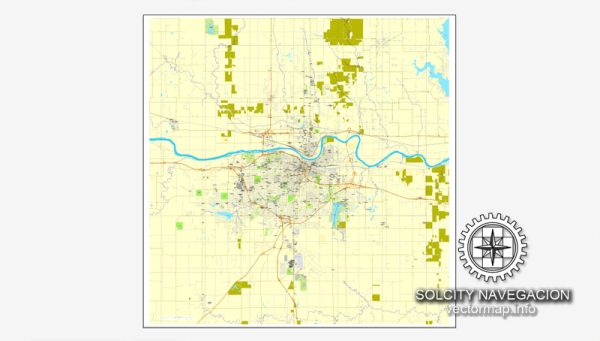 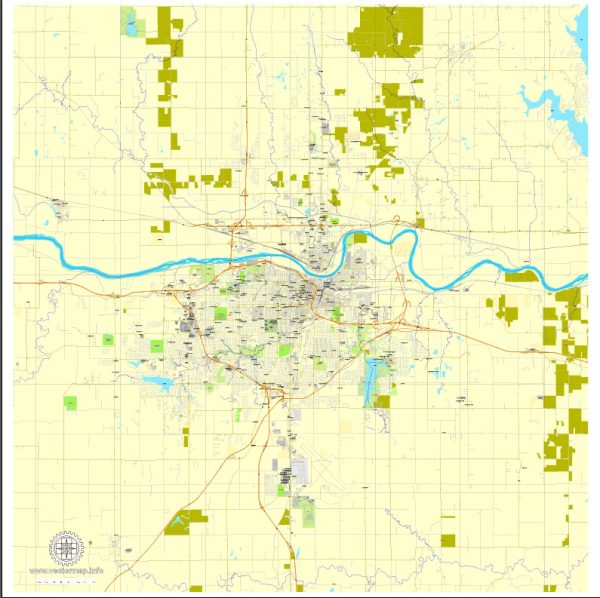 Vector Maps of the Topeka : city, capital (1861) of Kansas, U.S., and seat (1857) of Shawnee county. Topeka lies on the Kansas River in the eastern part of the state.
The name Topeka is of uncertain Indian origin; one interpretation is “smoky hill,” and another is “a good place to dig potatoes.” The present site was chosen in 1854 by a group of antislavery colonists from Lawrence, led by Charles Robinson, a resident agent of the New England Emigrant Aid Company. Cyrus K. Holliday helped to found the city, which later became headquarters for the building of the Atchison, Topeka and Santa Fe Railway system, of which he was the first president. Before the American Civil War, Topeka was the scene of several conflicts between the Free Soil groups (which opposed the extension of slavery into the West) and slave interests in Kansas Territory, of which it was the temporary capital (1856). Topeka also was the center of a major battle in the civil rights era in 1954, when plaintiffs successfully challenged segregation in the city’s public schools in Brown v. Board of Education of Topeka; the Monroe Elementary School, one of the segregated schools, and its grounds were designated a national historic site by the U.S. Congress in 1992. A tornado destroyed much of Topeka in 1966; annihilating some 800 homes and damaging 3,000 others, it was the costliest tornado in U.S. history to that time.
Area:
• Total: 62.76 sq mi (162.53 km2)
• Land: 61.44 sq mi (159.14 km2)
• Water: 1.31 sq mi (3.39 km2)

All of our editable Topeka Kansas vector maps are digital files,
which can be instantly downloaded in editable PDF or Adobe Illustrator format.
Objects on maps are usually divided into layers according to their types – lines, polygons, street names, object names (see map description!!!!)
Each of our Topeka Kansas digital maps is available in Adobe Illustrator or editable PDF format, (or on request in any other known format for the same price)
which use a vector approach to display images,
you can easily enlarge any part of our maps without compromising text, line or graphic quality,
with any increase or decrease ratio.
Using a vector graphics editor such as Adobe Illustrator, CorelDraw, Inkscape, or Freehand
you can easily crop parts of the map, add custom characters, and change colors and font attributes as needed.
We have a variety of Topeka Kansas vector maps with different levels of detail, from simple empty paths to highly detailed maps with roads and terrain layers.

Don’t see exactly what you’re looking for? Contact us to receive a special offer for an individual Topeka Kansas map for your project.