Vector Maps of the South Dakota : constituent state of the United States of America. South Dakota became the 40th state of the union on November 2, 1889. The state has two unique physical features: it contains the geographic center of the United States, which is located just north of Belle Fourche, and it has its own continental divide, as a result of which Lake Traverse, in the southeastern corner of the state, flows northward to Hudson Bay, and Big Stone Lake, on the Minnesota border, flows southward to the Gulf of Mexico. South Dakota is bordered by North Dakota to the north, Minnesota and Iowa to the east, Nebraska to the south, and Wyoming and Montana to the west. The state is split by the upper Missouri River valley into eastern and western regions. Pierre, in central South Dakota, is one of the country’s smallest state capitals.
Area:
• Total: 77,116 sq mi (199,729 km2)
• Land: 75,811 sq mi (196,350 km2)
• Water: 1,305 sq mi (3,379 km2) 1.7%
Download royalty free, editable vector maps of South Dakota State in high resolution digital PDF and Adobe Illustrator format. 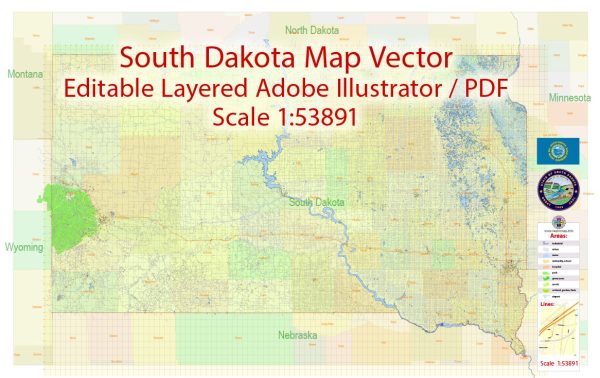