Vector Maps of the Sioux City : city, seat (1856) of Woodbury county, northwestern Iowa, U.S. It lies on the Missouri River (bridged to South Sioux City, Nebraska) at the influx of the Big Sioux and Floyd rivers, where Iowa, South Dakota, and Nebraska meet. The former territory of Omaha, Sioux, and Oto peoples, the site was visited in 1804 by the Lewis and Clark Expedition; Sergeant Charles Floyd, the expedition’s only fatality, was buried there (commemorated by a monument erected in 1960, the first U.S. national historic landmark). Laid out in 1848 by William Thompson of Illinois and initially known as Thompsonville, it was subsequently settled by Theophile Bruguier, a French-Canadian trader, who arrived in 1849 with his Sioux wives and their father, Chief War Eagle, who aided the European pioneers in the area. War Eagle’s grave is in a park on a bluff overlooking the river with a view of the three states. Incorporated in 1857, the community was renamed for the chief’s tribe. It grew with the steamboat trade and became a supply and land-office depot for the northern plains. With the advent of the railroad (1868) and the meat-packing industry (1872), its population increased rapidly.
Area:
• City: 59.62 sq mi (154.42 km2)
• Land: 58.45 sq mi (151.40 km2)
• Water: 1.17 sq mi (3.02 km2)
Download royalty free, editable vector maps of Sioux City Iowa in high resolution digital PDF and Adobe Illustrator format. 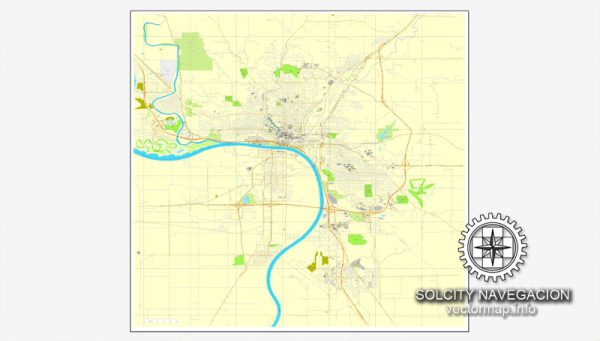 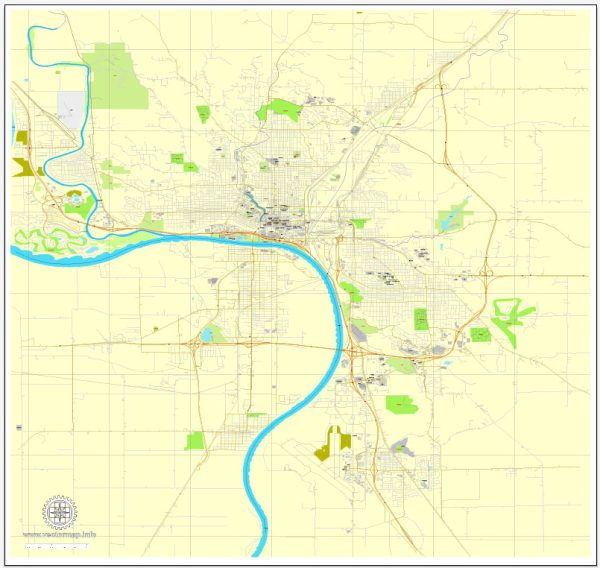