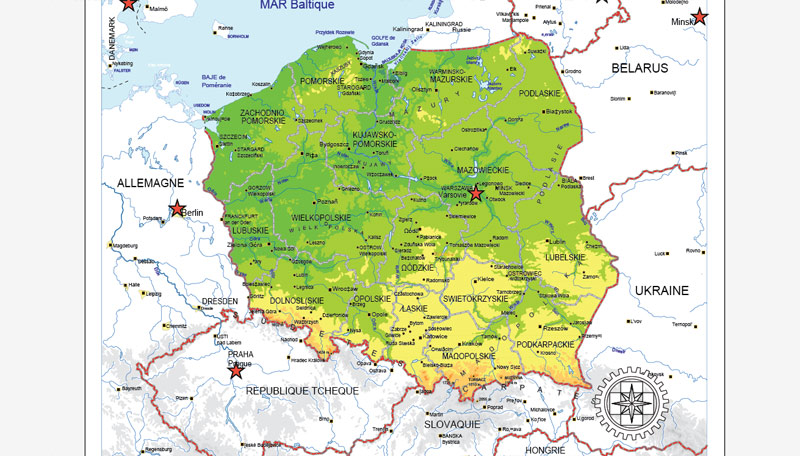 Poland
Country in Europe See also: Full version maps of Poland
Poland is a country in Eastern Europe on the Baltic Sea, famous for its medieval architecture and Jewish quarters. The city of Krakow is famous for the 14th-century Royal Castle on the Wawel Hill, which offers a magnificent view of the medieval old town, where the Cloth Hall, a Renaissance trading building on the Main Market Square, is located. Not far from the city is the Auschwitz-Birkenau Museum, opened on the site of the Nazi concentration camp Auschwitz, and the salt mine in Wieliczka, which is a chain of corridors and chambers.
Capital: Warsaw
Area: 322,575 km²
Population: 37.95 million

Poland, officially the Republic of Poland (Polish: Rzeczpospolita Polska, About this sound listen (help·info)), is a country in Central Europe, situated between the Baltic Sea in the north and two mountain ranges (the Sudetes and Carpathian Mountains) in the south. Bordered by Germany to the west; the Czech Republic and Slovakia to the south; Ukraine and Belarus to the east; and the Baltic Sea, Kaliningrad Oblast (a Russian exclave) and Lithuania to the north. The total area of Poland is 312,679 square kilometres (120,726 sq mi), making it the 69th largest country in the world and the 9th largest in Europe. With a population of over 38.5 million people, Poland is the 34th most populous country in the world, the 8th most populous country in Europe and the sixth most populous member of the European Union, as well as the most populous post-communist member of the European Union. Poland is a unitary state divided into 16 administrative subdivisions, and its capital and largest city is Warsaw. Other metropolises include Kraków, Wrocław, Poznań, Gdańsk and Szczecin—the country’s largest urban agglomeration is the Silesian Metropolis.

The establishment of a Polish state can be traced back to 966, when Mieszko I, ruler of a territory roughly coextensive with that of present-day Poland, converted to Christianity. The Kingdom of Poland was founded in 1025, and in 1569 it cemented a longstanding political association with the Grand Duchy of Lithuania by signing the Union of Lublin. This union formed the Polish–Lithuanian Commonwealth, one of the largest and most populous countries of 16th and 17th century Europe. The Commonwealth ceased to exist in the years 1772–95, when its territory was partitioned among Prussia, the Russian Empire, and Austria. Poland regained its independence (as the Second Polish Republic) at the end of World War I, in 1918.

In September 1939, World War II started with the invasions of Poland by Nazi Germany and the Soviet Union (as part of the Molotov–Ribbentrop Pact). More than six million Polish citizens died in the war. The borders of Poland vector maps were shifted westwards according to the Potsdam Conference in the aftermath of World War II. After the war, with the backing of the Soviet Union, a communist puppet government was formed, and after a falsified referendum in 1946, it took control of the country—turning Poland into a satellite state of the Soviet Union (as the People’s Republic of Poland). During the Revolutions of 1989 Poland’s Communist government was overthrown and Poland adopted a new constitution establishing itself as a democracy. Despite the large number of casualties and destruction the country experienced during World War II, the country managed to preserve much of its cultural wealth. There are 14 heritage sites inscribed on the UNESCO World Heritage and 54 Historical Monuments and many objects of cultural heritage in Poland.

Since the beginning of the transition to a primarily market-based economy that took place in the early 1990s, Poland has achieved a “very high” ranking on the Human Development Index, as well as gradually improving economic freedom. Poland printable map is a democratic country with an advanced high-income economy, a high quality of life and a very high standard of living. Moreover, the country is visited by nearly 16 million tourists every year (2013), which makes it one of the most visited countries in the world. Poland is the eighth largest economy in the European Union and among the fastest growing European economies. Furthermore, according to the Global Peace Index for 2014, Poland is one of the safest countries in the world to live in.

Poland is a country in Central Europe with an area of 312,679 square kilometres (120,726 sq. mi.), and mostly temperate climate. Generally speaking, Poland is an almost unbroken plain reaching from the Baltic Sea in the north, to the Carpathian Mountains in the south. Within that plain, terrain variations run in bands east to west. The Baltic coast has two natural harbors, the larger one in the Gdańsk-Gdynia region, and a smaller one near Szczecin in the far northwest. The northeastern region also known as Masurian Lake District with more than 2,000 lakes, is densely wooded, sparsely populated. To the south of the lake district, and across central Poland a vast region of plains extends all the way to the Sudetes on the Czech and Slovak borders southwest, and to the Carpathians on the Czech, Slovak and Ukrainian borders southeast. The central lowlands had been formed by glacial erosion in the Pleistocene ice age. The neighboring countries are Germany to the west, the Czech Republic and Slovakia to the south, Ukraine and Belarus to the east, and Lithuania and the Russian exclave of Kaliningrad to the northeast.

Poland is traditionally divided into five topographic zones from north to south.

The largest, the central lowlands or “Polish Plain” (Polish: Niż Polski or Nizina Polska), is narrow in the west, then expands to the north and south as it extends eastward. Along the eastern border, this zone reaches from the far northeast to within 200 kilometers of the southern border. The terrain in the central lowlands is quite flat, and earlier glacial lakes have been filled by sediment. The region is cut by several major rivers, including the Oder (Odra), which defines the Silesian Lowlands in the southwest, and the Vistula (Wisla), which defines the lowland areas of east-central Poland.

To the south of the lowlands are the lesser Poland uplands, a belt varying in width from 90 to 200 kilometers, formed by the gently sloping foothills of the Sudeten and Carpathian mountain ranges and the uplands that connect the ranges in southcentral Poland. The topography of this region is divided transversely into higher and lower elevations, reflecting its underlying geological structure. In the western section, the Silesia-Kraków Upthrust contains rich coal deposits.
Further information: List of mountains in Poland

The third topographic area is located on either side of Poland’s southern border and is formed by the Sudeten and Carpathian ranges. Within Poland, neither of these ranges is forbidding enough to prevent substantial habitation; the Carpathians are especially densely populated. The rugged form of the Sudeten range derives from the geological shifts that formed the later Carpathian uplift. The highest elevation in the Sudeten is Śnieżka (1,602 meters) in the Karkonosze Mountains. The Carpathians in Poland, formed as a discrete topographical unit in the relatively recent Tertiary Era, are the highest mountains in the country. They are the northernmost edge of a much larger range that extends into the Czech Republic, Slovakia, Ukraine, Hungary, and Romania. Within Poland the range includes two major basins, the Oświęcim and Sandomierz, which are rich in several minerals and natural gas.

To the north of the central lowlands, the lake region includes primeval forests – one of the last remaining in Europe and much of Poland’s shrinking unspoiled natural habitat. Glacial action in this region formed lakes and low hills in the otherwise flat terrain adjacent to Lithuania and the Baltic Sea. Small lakes dot the entire northern half of Poland, and the glacial formations that characterize the lake region extend as much as 200 kilometers inland in western Poland. Wide river valleys divide the lake region into three parts. In the northwest, Pomerania is located south of the Baltic coastal region and north of the Warta and Noteć rivers. Masuria occupies the remainder of northern Poland and features a string of larger lakes. Most of Poland’s 9,300 lakes that are more than 10,000 square metres in area are located in the northern part of the lake region, where they occupy about 10% of the surface area.

The Baltic coastal plains are a low-lying region formed of sediments deposited by the sea. The coastline was shaped by the action of the rising sea after the Scandinavian ice sheet retreated. The two major inlets in the smooth coast are the Pomeranian Bay on the German border in the far northwest and the Gulf of Gdańsk in the east. The Oder River empties into the former, and the Vistula forms a large delta at the head of the latter. Sandbars with large dunes form lagoons and coastal lakes along much of the coast.

The geological structure of Poland has been shaped by the continental collision of Europe and Africa over the past 60 million years, on the one hand (and the other), by the Quaternary glaciations of northern Europe. Both processes shaped the Sudetes and the Carpathian Mountains. The moraine landscape of northern Poland contains soils made up mostly of sand or loam, while the ice age river valleys of the south often contain loess. The Kraków-Częstochowa Upland, the Pieniny, and the Western Tatras consist of limestone, while the High Tatras, the Beskids, and the Karkonosze are made up mainly of granite and basalts. The Polish Jura Chain is one of the oldest mountain ranges on earth.
Giewont in the Tatra Mountains; the mountainous south is a popular destination for hikers

Poland has 70 mountains over 2,000 metres (6,600 feet) in elevation, all in the Tatras. The Polish Tatras, which consist of the High Tatras and the Western Tatras, is the highest mountain group of Poland and of the entire Carpathian range. In the High Tatras lies Poland’s highest point, the north-western summit of Rysy, 2,499 metres (8,199 ft) in elevation. At its foot lies the mountain lakes of Czarny Staw pod Rysami (Black Lake below Mount Rysy), and Morskie Oko (the Marine Eye).

The only desert located in Poland stretches over the Zagłębie Dąbrowskie (the Coal Fields of Dąbrowa) region. It is called the Błędów Desert, located in the Silesian Voivodeship in southern Poland. It has a total area of 32 square kilometres (12 sq mi). It is one of only five natural deserts in Europe. But also, it is the warmest desert that appears at this latitude. Błędów Desert was created thousands of years ago by a melting glacier. The specific geological structure has been of big importance. The average thickness of the sand layer is about 40 metres (131 ft), with a maximum of 70 metres (230 ft), which made the fast and deep drainage very easy.

The Baltic Sea activity in Słowiński National Park created sand dunes which in the course of time separated the bay from the sea. As waves and wind carry sand inland the dunes slowly move, at a speed of 3 to 10 metres (9.8 to 32.8 ft) meters per year. Some dunes are quite high – up to 30 metres (98 ft). The highest peak of the park – Rowokol (115 metres or 377 feet above sea level) — is also an excellent observation point.