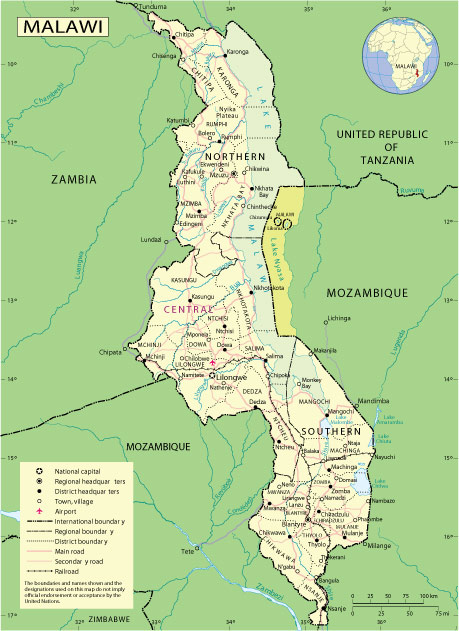 Malawi
Country, East Africa
Malawi is a landlocked country in South East Africa. Its relief is formed by plateaus, cut by the Great Rift Valley, where the huge Lake Malawi lies. At its southern tip is the national park of the same name, where you can see a wide variety of animals – from colorful fish to baboons. Thanks to its clear waters, the park is popular with scuba divers and boat enthusiasts. Situated on a peninsula, Cape Mclair is known for its beaches.
Capital: Lilonegwe
Area: 118,480 km²
Population: 19.13 million

Malawi, a largely agricultural country, is making efforts to overcome decades of underdevelopment, corruption and the impact of an HIV-Aids problem, which claims the lives of tens of thousands every year.

A programme to tackle HIV-Aids was launched in 2004, with the then-President Bakili Muluzi revealing that his brother had died from the disease.

Malawi is one of the world’s worst-hit by HIV-Aids and home to more than one million children orphaned by the disease.

For the first 30 years of independence Malawi was run by an authoritarian and quixotic President Hastings Kamuzu Banda, but democratic institutions have taken a firm hold since he relinquished power in the mid-1990s.

Most Malawians rely on subsistence farming, but the food supply situation is precarious because of the climate.

In recent years the country has achieved economic growth.