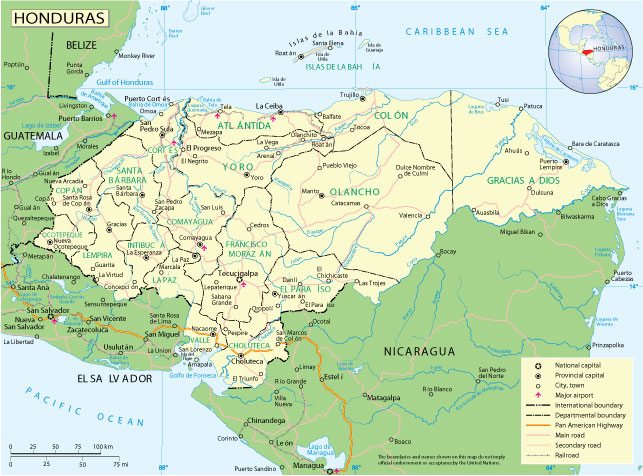 Honduras
Country in Central America.
Honduras is a country in Central America bordered by the Caribbean Sea to the north and the Pacific Ocean to the south. In the tropical forests near Guatemala, Copan is located – the center of one of the ancient Mayan states, which is known for its hieroglyphic signs carved on stone and high stone steles. The islands of Islas de la Bahia in the Caribbean Sea, which are part of the 1,000-kilometer Mesoamerican Barrier Reef, are popular among diving enthusiasts.
Capital: Tegucigalpa
Population: 9.905 million

Military rule, corruption, a huge wealth gap, crime and natural disasters have rendered Honduras one of the least developed and least secure countries in Central America.

Until the mid-1980s Honduras was dominated by the military, which enthusiastically supported US efforts to stem revolutionary movements in the region.

Since then, civilian leaders have sought to curb the power of the military – with varying degrees of success.

Some army officers have been charged with human rights abuses, but many have still to be prosecuted for violations committed in the 1980s.

The country has a youthful population; 50% of Hondurans are under the age of 19. But endemic poverty, chronic unemployment and the prospects offered by drug trafficking have contributed to a virulent crime wave conducted mainly by youth gangs known as “maras”.

The maras are said to have tens of thousands of members and use threats and violence to control poorer districts in towns and cities.

Meanwhile, police officers have been implicated in high-profile crimes, and the police are thought to have been involved in the murders by death squads of youths and street children.

Honduras was devastated by Hurricane Mitch in 1998. At least 5,000 people were killed and 70% of the country’s crops were destroyed. The damage was estimated at $3bn, setting development back by decades.

Thousands of Hondurans leave the country each year, most of them for the US. The money sent home by the overseas workers is an important source of income for many families.

The economy was dominated, until the mid-20th century, by foreign-owned banana companies that wielded outsized influence in politics and controlled wide swaths of land. Still a major exporter of the fruit, Honduras is also Central America’s second biggest coffee producer.

Part of a regional free trade deal with the United States, Honduras developed its textile industry to diversify away from dependence on agriculture.