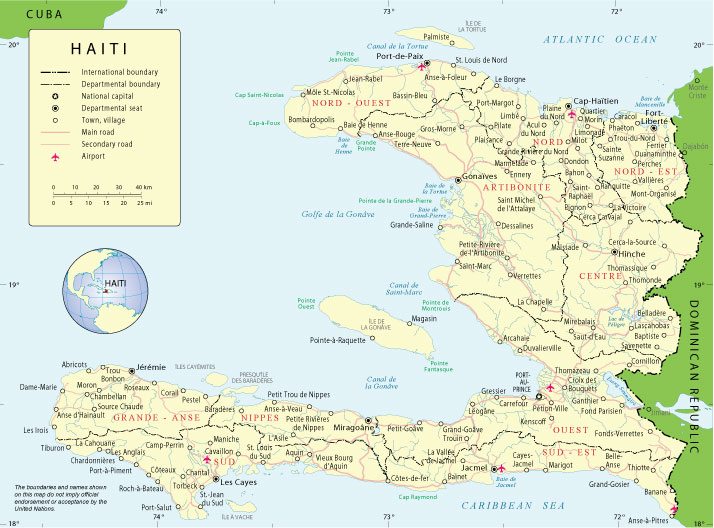 Haiti
Country in the Caribbean See also: Full version maps of Haiti and Dominicana
Haiti is a country in the Caribbean Sea, occupying the western part of the island of the same name and bordering on the Dominican Republic. The country is still recovering from the devastating earthquake of 2010, but many attractions, including those that were built at the beginning of the 19th century, remained unscathed. These include the mountaintop fortress of La Ferrière and the Baroque Palace of Sanssouci, the former residence of King Henry I.
Capital: Port-au-Prince
Population: 11.4 million

Haiti became the world’s first black-led republic and the first independent Caribbean state when it threw off French colonial control and slavery in the early 19th century.

But independence came at a crippling cost. It had to pay reparations to France, which demanded compensation for former slave owners. The 19th century “independence debt” was not paid off until 1947. There have been recent calls for France to repay the money.

Chronic instability, dictatorships and natural disasters in recent decades have left it as the poorest nation in the Americas.

An earthquake in 2010 killed more than 200,000 people and caused extensive damage to infrastructure and the economy.

A UN peacekeeping force has been in place since 2004 to help stabilize the country.