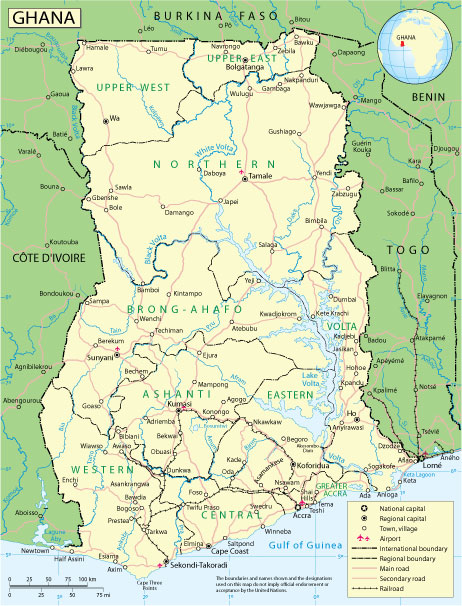 Ghana
Country in West Africa.
Ghana is a country in West Africa on the coast of the Guinea Ziliw, which is famous for its fauna, ancient forts and secluded beaches, for example, in the resort of Busua. The seaside towns of Elmina and Cape Coast are popular with tourists for their posuban shrines, colonial buildings, and castle-based museums dedicated to the slave trade. To the north of Cape Coast is the huge Kacum National Park, where you can take a walk along the bridge between the crowns of tropical trees.
Capital: Accra
Population: 31.07 million

Ghana is considered one of the more stable countries in West Africa since its transition to multi-party democracy in 1992.

Formerly known as the Gold Coast, Ghana gained independence from Britain in 1957, becoming the first sub-Saharan nation to break the chains of colonialism.

Gold, cocoa and more recently oil form the cornerstone of Ghana’s economy and have helped fuel an economic boom.

Until recently Ghana was hailed as a model for African growth but since 2013, its economy has endured a growing public deficit, high inflation and a weakening currency, resulting in it seeking an IMF bailout.