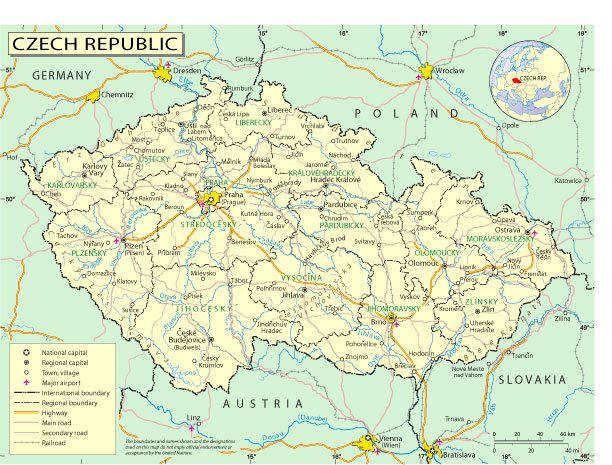 Czechia
Country in Europe See also: Full version maps of Czech Republic
The Czechia, better known as the Czech Republic, is a country in Central Europe famous for its ornate castles, rich history and beer. The main attractions of Prague, the capital of the country, are the Prague Castle of the 9th century – a well-preserved medieval part of the city – and Charles Bridge with its statues. Cesky Krumlov, a small town in South Bohemia, is notable for its architecture, which combines Gothic, Renaissance and Baroque. Its old buildings are full of shops and restaurants.
Capital: Prague
Population: 10.7 million

Part of Czechoslovakia until the “velvet divorce” in January 1993, the Czech Republic has a robust democratic tradition, a highly-developed economy, and a rich cultural heritage.

It emerged from over 40 years of Communist rule in 1990, and was the first former Eastern Bloc state to acquire the status of a developed economy. It joined the European Union in 2004.

Communist rule had lasted since 1948, when the restored pre-war democratic system was overthrown in a Soviet-backed coup. The “Prague Spring” of 1968, when Communist leader Alexander Dubcek tried to bring in liberal reforms, was crushed by Warsaw Pact tanks.

In 1989, as the curtain was coming down on communism in the Kremlin, the dissident playwright Vaclav Havel emerged as the figurehead of the country’s “velvet revolution” and became the first president of post-communist Czechoslovakia.