This vector map of Delhi is used as a basis for design, editing, and further printing.

This is the most detailed, exact map of Delhi for high-quality printing and polygraphy. You can always clarify the map development date by contacting us.

For your convenience, all objects on Delhi vector map are divided into layers. And the editing is very easy – colors, lines, etc.

You can easily add any objects needed (e.g. shops, salons, sale points, gas station or attraction) on any layer of Delhi vector map.

Delhi is a city and a union territory of India containing New Delhi, the capital of India. It is bordered by Haryana on three sides and by Uttar Pradesh to the east. The NCT covers an area of 1,484 square kilometres (573 sq mi). According to the 2011 census, Delhi’s city proper population was over 11 million, the second-highest in India after Mumbai, while the whole NCT’s population was about 16.8 million. Delhi’s urban area is now considered to extend beyond the NCT boundaries and include the neighboring satellite cities of Faridabad, Gurgaon, Ghaziabad and Noida in an area now called Central National Capital Region (CNCR) and had an estimated 2016 population of over 26 million people, making it the world’s second-largest urban area according to United Nations. As of 2016, recent estimates of the metro economy of its urban area have ranked Delhi either the most or second-most productive metro area of India. Delhi is the second-wealthiest city in India after Mumbai, with a total private wealth of $450 billion and is home to 18 billionaires and 23,000 millionaires. 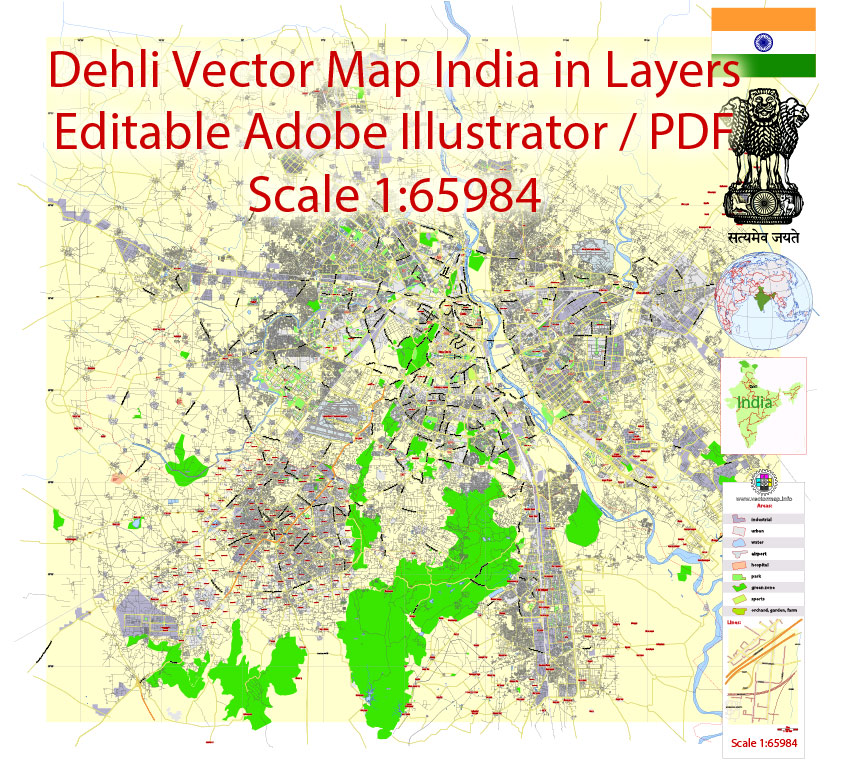 One of the advantages of Delhi vector maps of our production is the relevance of cartographic data, we constantly update all our products.

This vector map of Delhi is used by:
designers, layout designers, printers, advertisers and architects. Our product – vector maps – is designed for further editing and printing in large formats – from @Wall format (a few meters) to A-0 and A-1, A-2, A-3.

Advertising and presentation map of Delhi (usually the final designer marks the routes, and puts the client’s objects (shops, saloons, gas stations etc.)
The undoubted advantage is that people will NEVER throw out this advertising product – the map. In fact, as an advertising medium, a map is the most “long-playing” of the well-known polygraphic advertising media, with the longest lifespan, and the maximum number of interactions with the customer. 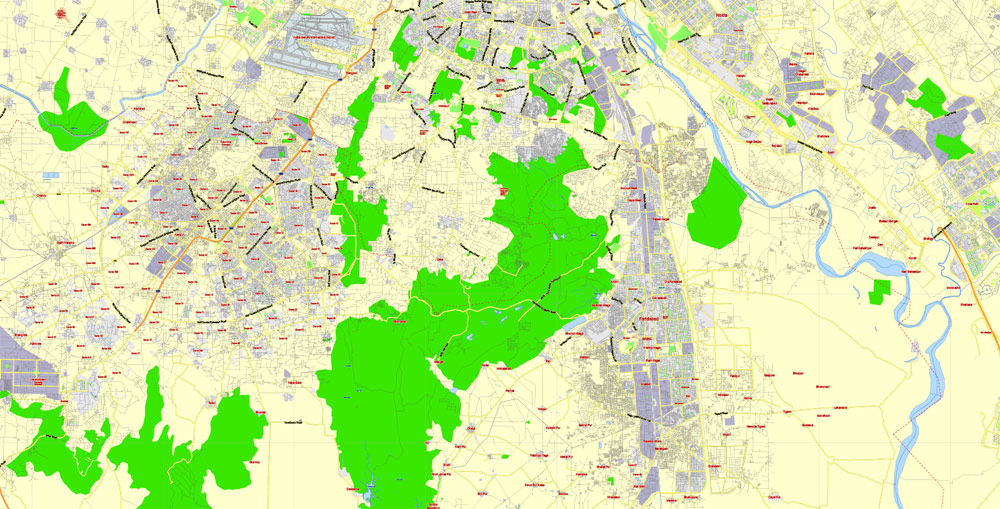 Take a look, who purchases our vector maps of Delhi in “Our Clients and Friends” page – these are large and small companies, from super-brands like Volvo and Starbucks, to small design studios and printing houses.

It’s very easy to work with vector maps of Delhi, even for a not very experienced designer who can turn on and off the map layers, add new objects, change the colors of fill and lines according to customer requirements.

The undoubted advantage of Delhi vector maps in printing is an excellent and detailed visualization, when customer can expand a large paper map and instantly define his location, find a landmark, an object or address on map, unlike using the popular electronic formats of Google and Yandex maps for example.

Printable vector maps of Delhi are much more convenient and efficient than any electronic maps on your smartphone, because ALL DETAILS are displayed in the entire space of Delhi map. 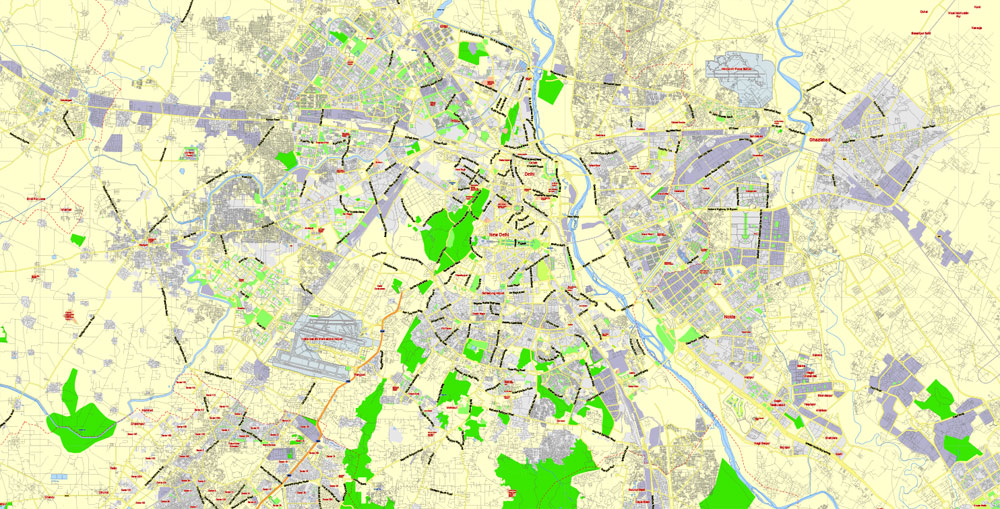 You will probably want to change the color scheme used on our Delhi vector map.

To quickly and effectively play with colors.
Of course, you can do it manually, all objects in our Delhi vector map are divided according to types and layers, and you can easily change the color gamma of vector objects in groups and layers.

But there is more effective way of working with the whole VECTOR MAP of Delhi and all layers:

If you have selected a part or a layer of Delhi vector map and open the dialog box by clicking the icon in the Control panel, on the Samples palette or the Color Catalog, or if you choose Edit > Edit Colors> Repaint Graphic Object, then the «Repaint Graphic Object» dialog box appears, and you get access to «Assign» and «Edit» tabs.

Delhi has been continuously inhabited since the 6th century BC. Through most of its history, Delhi has served as a capital of various kingdoms and empires. It has been captured, ransacked and rebuilt several times, particularly during the medieval period, and modern Delhi is a cluster of a number of cities spread across the metropolitan region. 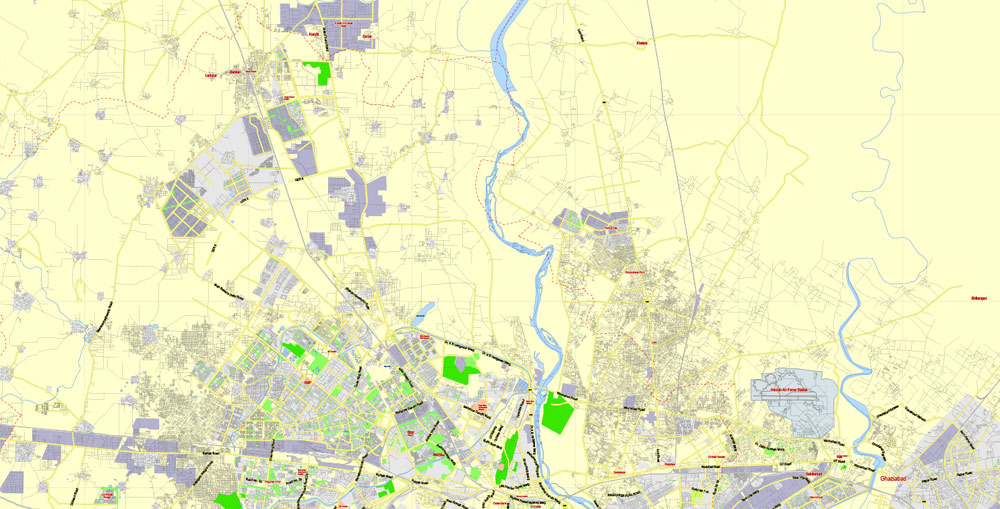 «Edit»
The «Edit» tab is designed to create a new or edit the existing color groups.
The harmony rules Menu and the Color Wheel are used to conduct experiments with color harmonies. The color wheel shows how colors are related in color harmony, and the color bars allow you to view and manipulate an individual color values. In addition, you can adjust the brightness, add and remove colors, save color groups and view colors on the selected Vector Map of Delhi or a separated layers.

«Assign»
The «Assign» tab is used to view and control on how the original colors are replaced with colors from the color group like your corporate colors in the Vector Map of Delhi.

The assign color ability is provided only if the entire map, layer or fragment is selected in the document. You can specify which of new colors replace the current colors, whether the spot colors should be preserved and how colors are replaced (for example, you can replace colors completely or changing the color tone while maintaining the brightness). The «Assign» tab allows you to redefine colors in the Vector Map of Delhi, or in separate layers and fragments using the current color group or reducing the number of colors in the current Vector Map. 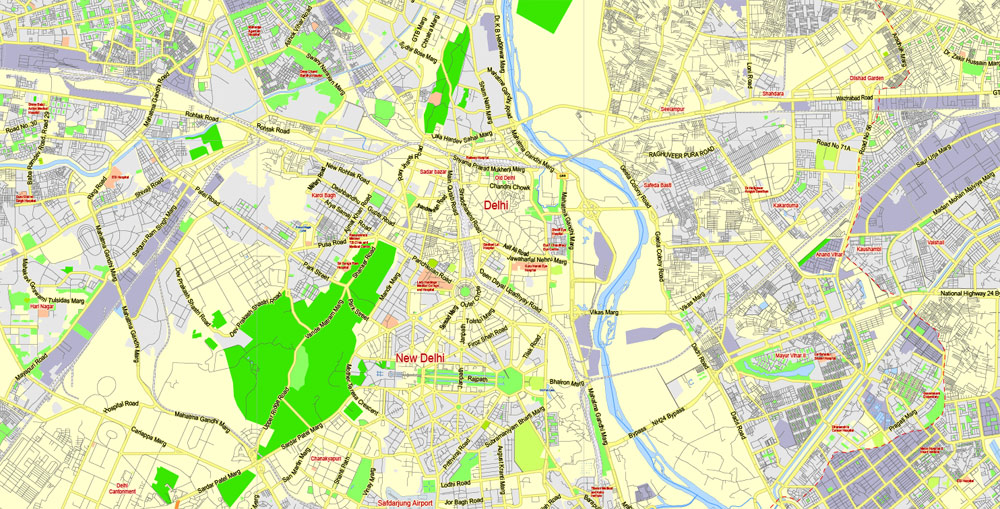 Any color group can be selected and edited, or used to redefine the colors in the selected vector map of Delhi, its fragments or elements.

Use these commands if you need to edit the colors in the selected vector map of Delhi.

«Repaint Graphic object» button on the «Control» panel.
Use this button if you need to adjust colors of Delhi vector map using the а «Repaint graphic object» dialog box. 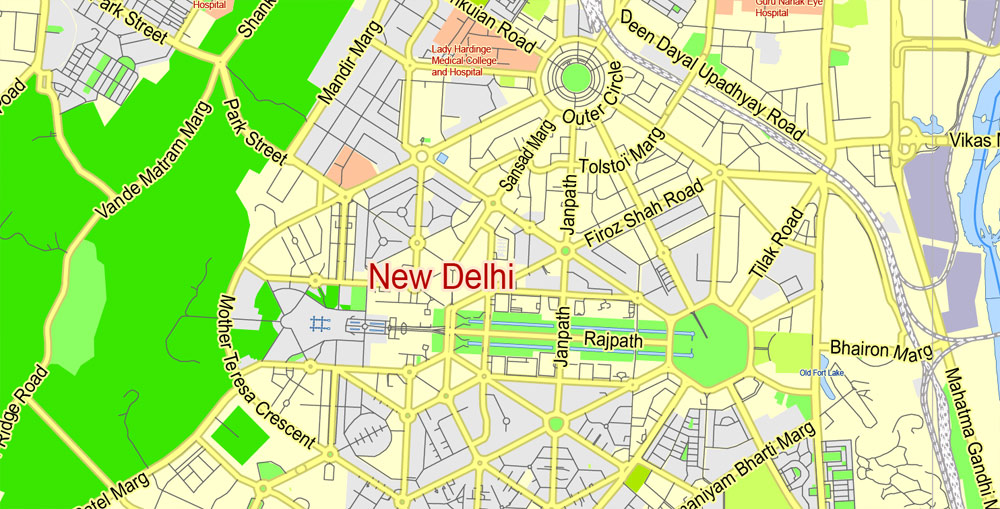 Note. This color editing method is convenient for global color adjustment in a vector map, if global colors were not used when creating a Map of Delhi.

Click this button if you need to edit colors on the «Color Catalog» palette or edit and then apply them to the selected Vector Map of Delhi or its fragment.

Click this button if you need to edit the colors in the specific color group or edit and apply them to the selected Vector Map of Delhi or a group of its elements, for example, the whole layer “Streets and lines”. You can also double-click the color group in the Samples panel to open the dialog box. 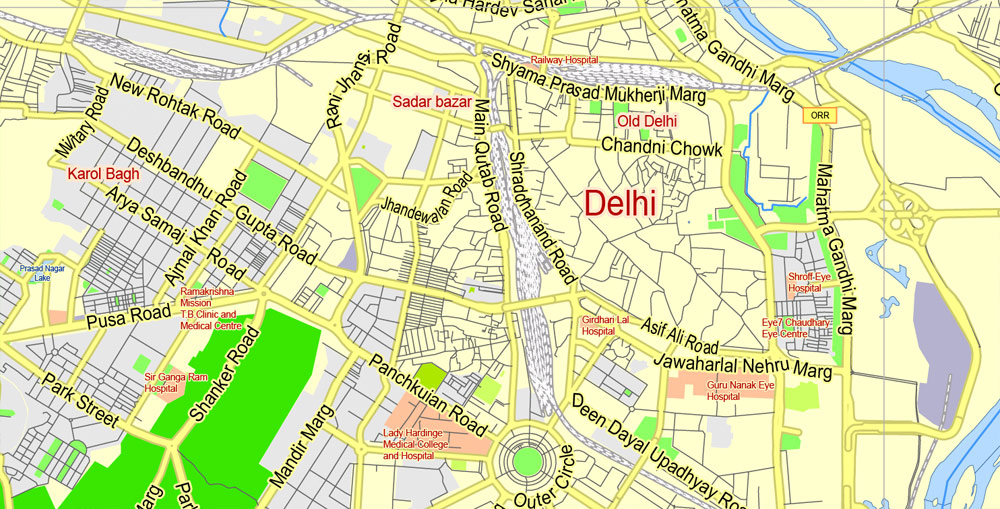 A union territory, the political administration of the NCT of Delhi today more closely resembles that of a state of India, with its own legislature, high court and an executive council of ministers headed by a Chief Minister. New Delhi is jointly administered by the federal government of India and the local government of Delhi, and serves as the capital of the nation as well as the NCT of Delhi. Delhi hosted the first and ninth Asian Games in 1951 and 1982, respectively, 1983 NAM Summit, 2010 Men’s Hockey World Cup, 2010 Commonwealth Games, 2012 BRICS Summit and was one of the major host cities of the 2011 Cricket World Cup.

Delhi
Indian union territory
Delhi, India’s capital territory, is a massive metropolitan area in the country’s north. In Old Delhi, a neighborhood dating to the 1600s, stands the imposing Mughal-era Red Fort, a symbol of India, and the sprawling Jama Masjid mosque, whose courtyard accommodates 25,000 people. Nearby is Chandni Chowk, a vibrant bazaar filled with food carts, sweets shops and spice stalls. 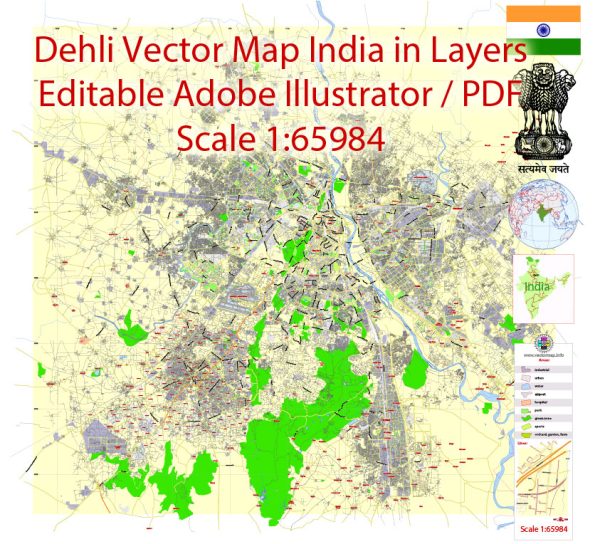 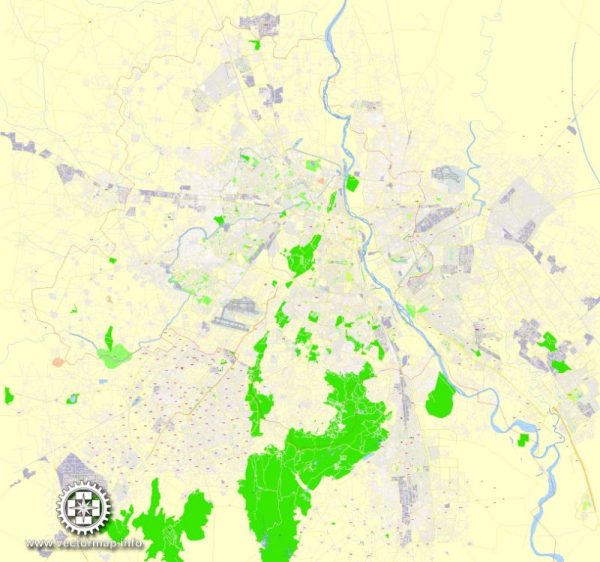