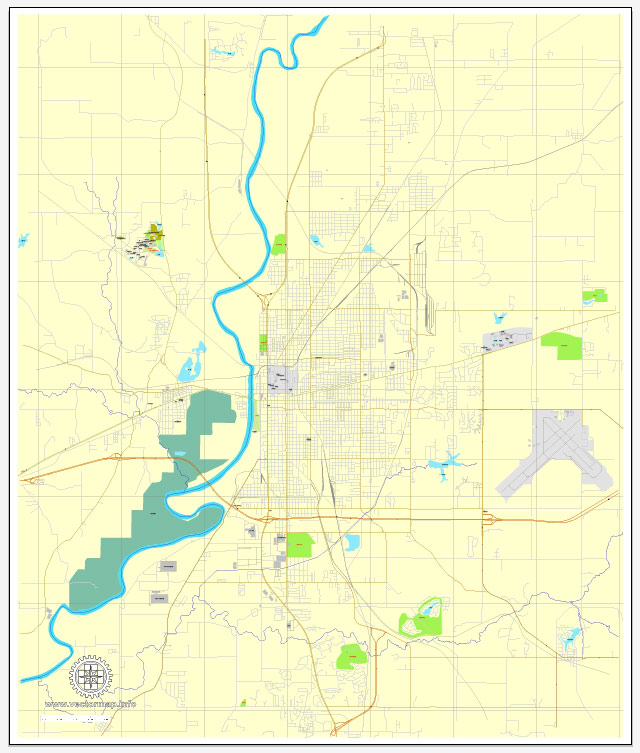 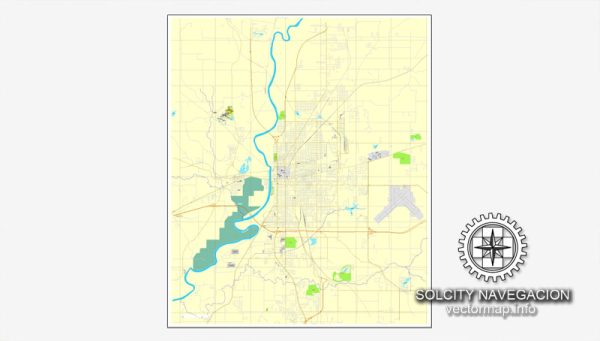 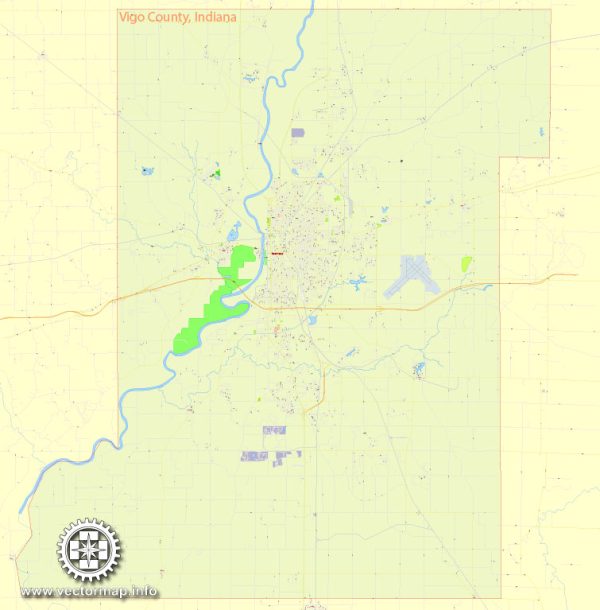 Vector Maps of the Terre Haute : city, seat (1818) of Vigo county, western Indiana, U.S. It lies on a 10-mile (16-km) square plateau above the Wabash River (whence its French name meaning “high ground”), 71 miles (114 km) west-southwest of Indianapolis. The site was once a place of rendezvous for Indian tribes, and nearby Fort Harrison, built in 1811, was frequently attacked by Tecumseh’s Shawnee. Laid out in 1816, it became an important community on the Cumberland (National) Road (1835), the Wabash and Erie Canal (1849), and the Terre Haute and Richmond Railroad (1852). Development of local bituminous coal deposits in the 1860s plus several oil wells stimulated industrial growth. Miners organized early, and the city is remembered in labor history for militant union activity. The 1890 home of Eugene V. Debs, who organized the country’s first industrial union (American Railway Union) in Terre Haute in 1893, still stands as a memorial and labor museum. The city subsequently acquired highly diversified industries including the manufacture of pharmaceuticals, packaging products, trailers, and audiocassettes and compact discs. A federal penitentiary was built south of the city in the 1940s. Terre Haute is the seat of Indiana State University (1865) and Rose-Hulman Institute of Technology (1874). St. Mary-of-the-Woods College (1840) is about 5 miles (8 km) north.
Elevation: 152 m
Area: 91.35 km²

All of our editable Terre Haute Indiana vector maps are digital files,
which can be instantly downloaded in editable PDF or Adobe Illustrator format.
Objects on maps are usually divided into layers according to their types – lines, polygons, street names, object names (see map description!!!!)
Each of our Terre Haute Indiana digital maps is available in Adobe Illustrator or editable PDF format, (or on request in any other known format for the same price)
which use a vector approach to display images,
you can easily enlarge any part of our maps without compromising text, line or graphic quality,
with any increase or decrease ratio.
Using a vector graphics editor such as Adobe Illustrator, CorelDraw, Inkscape, or Freehand
you can easily crop parts of the map, add custom characters, and change colors and font attributes as needed.
We have a variety of Terre Haute Indiana vector maps with different levels of detail, from simple empty paths to highly detailed maps with roads and terrain layers.

Don’t see exactly what you’re looking for? Contact us to receive a special offer for an individual Terre Haute Indiana map for your project.