Vector Maps of the North Carolina : constituent state of the United States of America. One of the 13 original states, it lies on the Atlantic coast midway between New York and Florida and is bounded to the north by Virginia, to the east by the Atlantic Ocean, to the south by South Carolina and Georgia, and to the west by Tennessee. The terrain of North Carolina is among the wettest in the country, with vast marshlands in the coastal tidewater area and numerous lakes in the Piedmont and Appalachian regions. These three physical regions account for much of the diversity in lifestyles and cultures within the state’s boundaries. The capital is Raleigh.
Area:
• Total: 53,819 sq mi (139,390 km2)
• Land: 48,711 sq mi (126,161 km2)
• Water: 1,972 sq mi (5,108 km2) 9.5%
Download royalty free, editable vector maps of North Carolina State in high resolution digital PDF and Adobe Illustrator format. 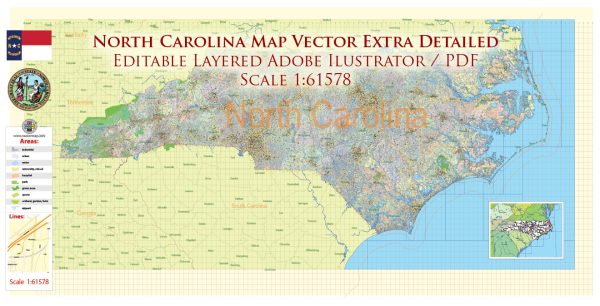