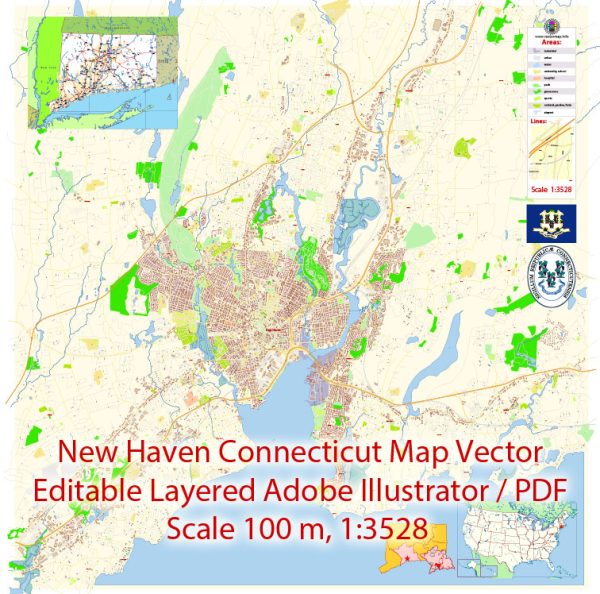 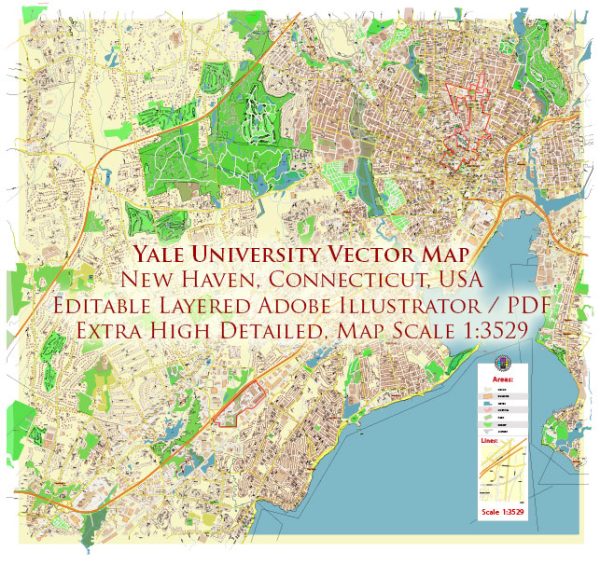 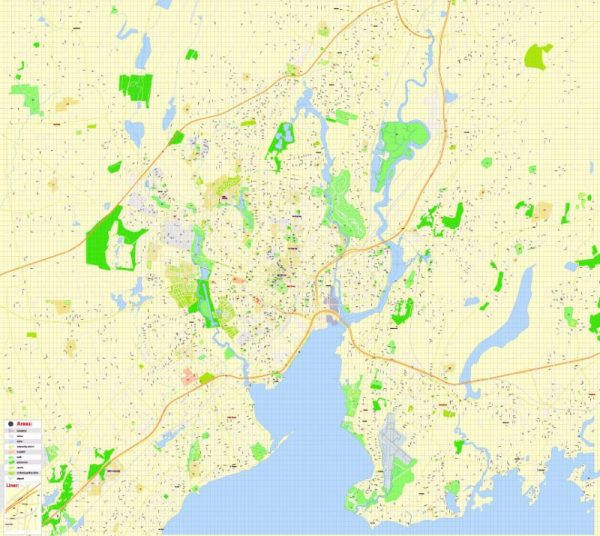 Vector Maps of the New Haven : city, coextensive with the town (township) of New Haven, New Haven county, south-central Connecticut, U.S. It is a port on Long Island Sound at the Quinnipiac River mouth. Originally settled as Quinnipiac in 1638 by a company of English Puritans led by John Davenport and Theophilus Eaton, it was renamed in 1640, probably for Newhaven, England. In 1643 it combined with several adjacent towns, including Milford and Guilford, to form the New Haven colony, of which Eaton was governor until his death in 1658. In 1665 New Haven colony reluctantly accepted absorption into the more liberal and democratic Connecticut colony, which was based in Hartford and enjoyed a royal charter. From 1701 New Haven was co-capital with Hartford, a position it maintained in both colony and state until 1875. During the American Revolution it was sacked (July 5, 1779) by loyalist forces under Major General William Tryon. The town was an important center of abolitionist sentiment during the American Civil War.
Area:
• City: 20.13 sq mi (52.15 km2)
• Land: 18.69 sq mi (48.41 km2)
• Water: 1.44 sq mi (3.74 km2)

All of our editable New Haven Connecticut vector maps are digital files,
which can be instantly downloaded in editable PDF or Adobe Illustrator format.
Objects on maps are usually divided into layers according to their types – lines, polygons, street names, object names (see map description!!!!)
Each of our New Haven Connecticut digital maps is available in Adobe Illustrator or editable PDF format, (or on request in any other known format for the same price)
which use a vector approach to display images,
you can easily enlarge any part of our maps without compromising text, line or graphic quality,
with any increase or decrease ratio.
Using a vector graphics editor such as Adobe Illustrator, CorelDraw, Inkscape, or Freehand
you can easily crop parts of the map, add custom characters, and change colors and font attributes as needed.
We have a variety of New Haven Connecticut vector maps with different levels of detail, from simple empty paths to highly detailed maps with roads and terrain layers.

Don’t see exactly what you’re looking for? Contact us to receive a special offer for an individual New Haven Connecticut map for your project.