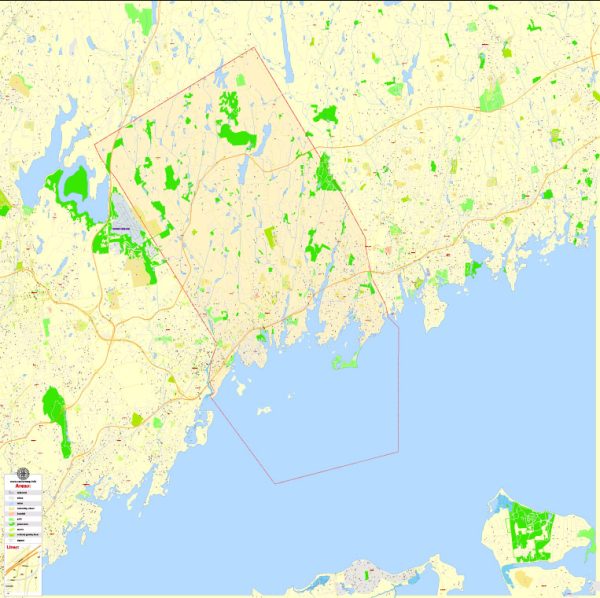 Vector Maps of the Greenwich : urban town (township), Fairfield county, southwestern Connecticut, U.S., on Long Island Sound. It was founded in 1640 by the New Haven colony agents Robert Feaks and Captain Daniel Patrick, who purchased land from the Siwanoy Indians for 25 English coats, and it was named for Greenwich, England. It soon came under Dutch control but was returned to Connecticut in 1650 and was organized as a town in 1665. During the American Revolution it was plundered by British troops under Major General William Tryon. Prominent New Yorkers built palatial estates in the town in the 19th century. Greenwich now serves as a residential suburb of New York City and is a major financial center. Its indented coastline has boating and recreation facilities. Interest in wildlife is reflected in the Bruce Museum and the Audubon Center (a 485-acre [196-hectare] sanctuary). Several private preparatory schools (including Whitby Montessori School – 1958) are in the town. Area 48 square miles (124 square km).

All of our editable Greenwich Connecticut vector maps are digital files,
which can be instantly downloaded in editable PDF or Adobe Illustrator format.
Objects on maps are usually divided into layers according to their types – lines, polygons, street names, object names (see map description!!!!)
Each of our Greenwich Connecticut digital maps is available in Adobe Illustrator or editable PDF format, (or on request in any other known format for the same price)
which use a vector approach to display images,
you can easily enlarge any part of our maps without compromising text, line or graphic quality,
with any increase or decrease ratio.
Using a vector graphics editor such as Adobe Illustrator, CorelDraw, Inkscape, or Freehand
you can easily crop parts of the map, add custom characters, and change colors and font attributes as needed.
We have a variety of Greenwich Connecticut vector maps with different levels of detail, from simple empty paths to highly detailed maps with roads and terrain layers.

Don’t see exactly what you’re looking for? Contact us to receive a special offer for an individual Greenwich Connecticut map for your project.