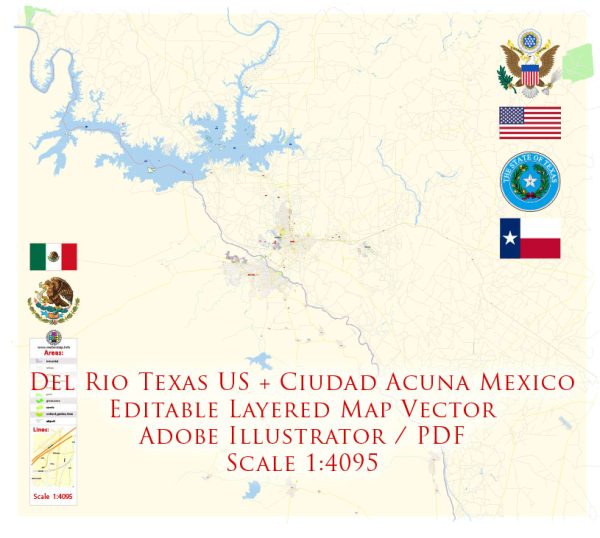 Vector Maps of the Del Rio : city, seat (1885) of Val Verde county, southwestern Texas, U.S. It lies along the Rio Grande, there bridged to Ciudad Acuña, Mexico, 145 miles (233 km) west of San Antonio. The original Spanish mission of San Felipe del Rio (c. 1675) on the site was destroyed by Indians, but the name survived until 1883, when it was shortened to avoid confusion with San Felipe de Austin. The present community was founded in 1872. Remnants of an old canal system that carried water from the prolific San Felipe Springs still survive. A port of entry with a busy tourist trade, Del Rio is also a marketing center for an extensive ranching area, and in recent years it has become a retirement center. Laughlin Air Force Base lies immediately to the east. The international Amistad Dam with its 84,000-acre (34,000-hectare) lake and recreation area is 12 miles (19 km) upstream. Southwest Texas Junior College and Sul Ross State University operate branch campuses in the city. Inc. 1911.

All of our editable Del Rio Texas US + Ciudad Acuna Mexico vector maps are digital files,
which can be instantly downloaded in editable PDF or Adobe Illustrator format.
Objects on maps are usually divided into layers according to their types – lines, polygons, street names, object names (see map description!!!!)
Each of our Del Rio Texas US + Ciudad Acuna Mexico digital maps is available in Adobe Illustrator or editable PDF format, (or on request in any other known format for the same price)
which use a vector approach to display images,
you can easily enlarge any part of our maps without compromising text, line or graphic quality,
with any increase or decrease ratio.
Using a vector graphics editor such as Adobe Illustrator, CorelDraw, Inkscape, or Freehand
you can easily crop parts of the map, add custom characters, and change colors and font attributes as needed.
We have a variety of Del Rio Texas US + Ciudad Acuna Mexico vector maps with different levels of detail, from simple empty paths to highly detailed maps with roads and terrain layers.

Don’t see exactly what you’re looking for? Contact us to receive a special offer for an individual Del Rio Texas US + Ciudad Acuna Mexico map for your project.