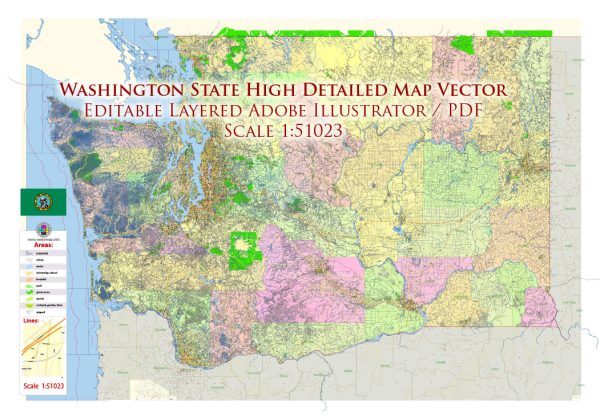 Vector Maps of the Washington : constituent state of the United States of America. Lying at the northwestern corner of the 48 conterminous states, it is bounded by the Canadian province of British Columbia to the north, the U.S. states of Idaho to the east and Oregon to the south, and the Pacific Ocean to the west. The capital is Olympia, located at the southern end of Puget Sound in the western part of the state. The state’s coastal location and excellent harbors give it a leading role in trade with Alaska, Canada, and countries of the Pacific Rim. Washington cities have sister cities in several countries, and their professional and trade associations commonly include Canadian members.
Area:
• Total: 71,362 sq mi (184,827 km2)
• Land: 66,544 sq mi (172,587 km2)
• Water: 4,757 sq mi (12,237 km2) 6.6%
Dimensions:
• Length: 240 mi (400 km)
• Width: 360 mi (580 km)
Elevation: 1,700 ft (520 m)
Highest elevation Mount Rainier 14,411 ft (4,392 m)
Lowest elevation Pacific Ocean 0 ft

All of our editable Washington State vector maps are digital files,
which can be instantly downloaded in editable PDF or Adobe Illustrator format.
Objects on maps are usually divided into layers according to their types – lines, polygons, street names, object names (see map description!!!!)
Each of our Washington State digital maps is available in Adobe Illustrator or editable PDF format, (or on request in any other known format for the same price)
which use a vector approach to display images,
you can easily enlarge any part of our maps without compromising text, line or graphic quality,
with any increase or decrease ratio.
Using a vector graphics editor such as Adobe Illustrator, CorelDraw, Inkscape, or Freehand
you can easily crop parts of the map, add custom characters, and change colors and font attributes as needed.
We have a variety of Washington State vector maps with different levels of detail, from simple empty paths to highly detailed maps with roads and terrain layers.

Don’t see exactly what you’re looking for? Contact us to receive a special offer for an individual Washington State map for your project.