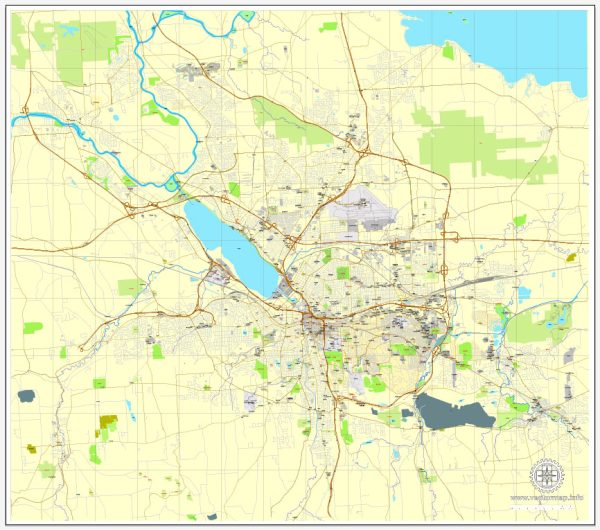 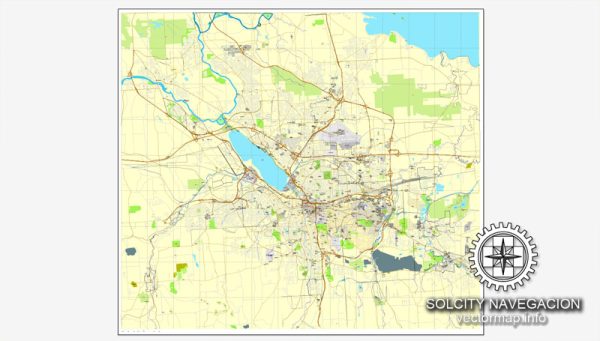 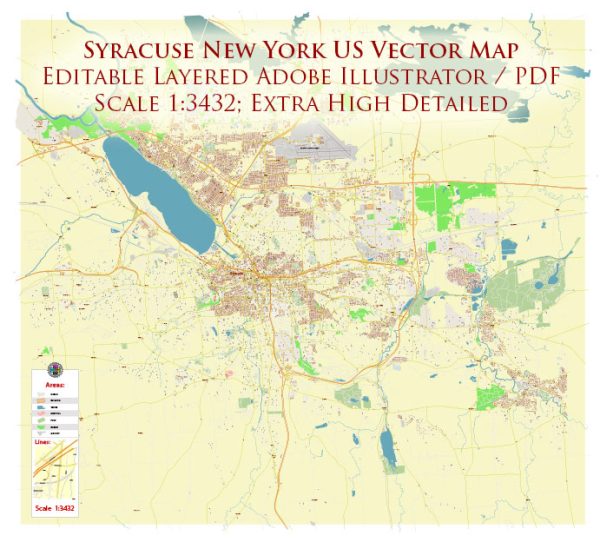 Vector Maps of the Syracuse : city, seat (1827) of Onondaga county, central New York, U.S. It lies at the south end of Lake Onondaga, midway between Albany and Buffalo (147 miles [237 km] west).
The site, once the territory of the Onondaga Indians and headquarters of the Iroquois Confederacy, was visited by explorers Samuel de Champlain in 1615 and Pierre Esprit, sieur de Radisson (while a captive of the Mohawks), in 1651. The Jesuit missionary Father Simon Le Moyne in 1654 was the first European to note the site’s brine springs (later the basis of a salt industry). A mission and Fort Sainte Marie de Gannentaha were established nearby in 1655–56, but Indian hostility and the swampy location (notorious for summer fevers) precluded early settlement. Ephraim Webster established a trading post in 1786 at the mouth of Onondaga Creek where it enters Lake Onondaga, and in 1788 sawmills and gristmills were built at the site by Asa Danforth, “the father of Onondaga county.” A treaty with the Indians gave the state of New York control over the brine springs, and after 1797 the saltlands were leased for salt extraction. Three villages sprang up: Webster’s Landing, Salina, and Geddes. A post office, established at Webster’s Landing in 1820, was named Syracuse for the ancient Greek city in Sicily.
Area: 66.23 km²

All of our editable Syracuse New York vector maps are digital files,
which can be instantly downloaded in editable PDF or Adobe Illustrator format.
Objects on maps are usually divided into layers according to their types – lines, polygons, street names, object names (see map description!!!!)
Each of our Syracuse New York digital maps is available in Adobe Illustrator or editable PDF format, (or on request in any other known format for the same price)
which use a vector approach to display images,
you can easily enlarge any part of our maps without compromising text, line or graphic quality,
with any increase or decrease ratio.
Using a vector graphics editor such as Adobe Illustrator, CorelDraw, Inkscape, or Freehand
you can easily crop parts of the map, add custom characters, and change colors and font attributes as needed.
We have a variety of Syracuse New York vector maps with different levels of detail, from simple empty paths to highly detailed maps with roads and terrain layers.

Don’t see exactly what you’re looking for? Contact us to receive a special offer for an individual Syracuse New York map for your project.