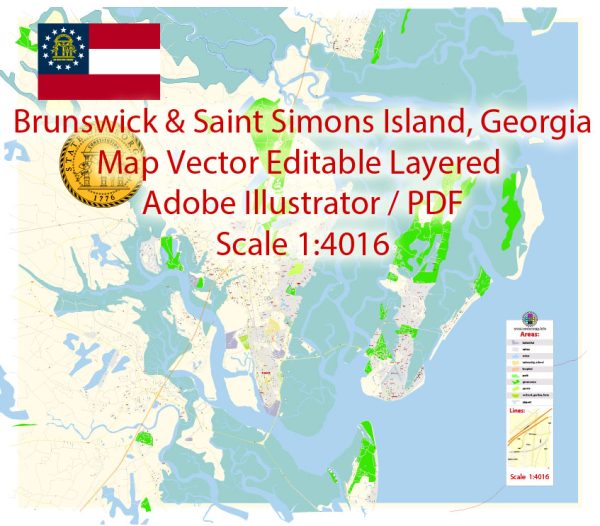 Vector Maps of the Brunswick : city, seat (1777) of Glynn county, southeastern Georgia, U.S. It lies on St. Simons Sound and the Atlantic Intracoastal Waterway, about 75 miles (120 km) southwest of Savannah. Mark Carr, a friend of Georgia colony founder James Edward Oglethorpe, established a tobacco plantation in the 1740s on the site (then known as Plug Point) across from Fort Frederica (1736) on St. Simons Island; the fort became the southernmost British outpost in North America after King George’s War (1744–48). Brunswick, founded in 1771 by Georgia’s Royal Provincial Colonial Council, was named for the ancestral home in Germany of England’s then-reigning house of Hanover. During the American Civil War the city was evacuated in 1862, but it was reoccupied the following year by the Confederates, who repulsed the only Union attack on it.
Area:
• City: 25.09 sq mi (64.99 km2)
• Land: 17.02 sq mi (44.08 km2)
• Water: 8.07 sq mi (20.91 km2)
• Metro: 1,286 sq mi (3,332 km2)

All of our editable Brunswick St. Simons Island Georgia vector maps are digital files,
which can be instantly downloaded in editable PDF or Adobe Illustrator format.
Objects on maps are usually divided into layers according to their types – lines, polygons, street names, object names (see map description!!!!)
Each of our Brunswick St. Simons Island Georgia digital maps is available in Adobe Illustrator or editable PDF format, (or on request in any other known format for the same price)
which use a vector approach to display images,
you can easily enlarge any part of our maps without compromising text, line or graphic quality,
with any increase or decrease ratio.
Using a vector graphics editor such as Adobe Illustrator, CorelDraw, Inkscape, or Freehand
you can easily crop parts of the map, add custom characters, and change colors and font attributes as needed.
We have a variety of Brunswick St. Simons Island Georgia vector maps with different levels of detail, from simple empty paths to highly detailed maps with roads and terrain layers.

Don’t see exactly what you’re looking for? Contact us to receive a special offer for an individual Brunswick St. Simons Island Georgia map for your project.