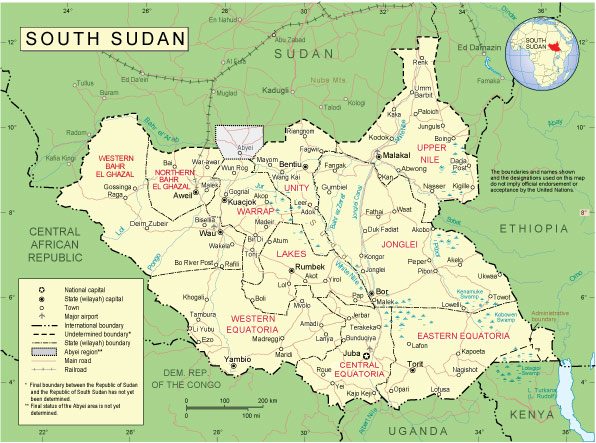 South Sudan, officially the Republic of South Sudan, is a state in Africa with its capital in Juba. It borders Ethiopia to the east, Kenya, Uganda and the Democratic Republic of the Congo to the south, the Central African Republic to the west, and Sudan to the north; the total length of the borders is 6018 km.
Capital: Juba
Date of foundation: July 9, 2011
Population: 11.19 million

South Sudan gained independence from Sudan on 9 July 2011 as the outcome of a 2005 agreement that ended Africa’s longest-running civil war.

Made up of the 10 southern-most states of Sudan, South Sudan is one of the most diverse countries in Africa. It is home to over 60 different major ethnic groups, and the majority of its people follow traditional religions.

Independence has not brought peace to South Sudan, however. The 2013-2015 civil war displaced 2.2 million people and threatened the success of one of the world’s newest countries.