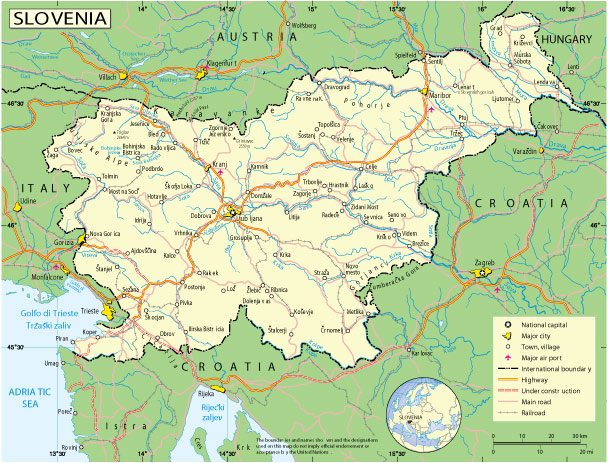 Slovenia
Country, Balkan Peninsula See also: Full version maps of Slovenia
Slovenia is a country in Central Europe with beautiful mountains, ski resorts and lakes. On the shores of the glacial Lake Bled, fed by thermal springs, the resort town of Bled is located. Its main attractions are an island with a church and a medieval castle, standing on a sheer cliff. In Ljubljana, Slovenia’s capital, baroque façades blend with the modern architecture of Jože Plečnik, whose famous Triple Bridge spans the winding Ljubljanica River.
Capital: Ljubljana
Population: 2.1 million

Slovenia is a small country in Central Europe, but contains within its borders Alpine mountains, thick forests, historic cities and a short Adriatic coastline.

Slovenia was the first former Yugoslav republic to join the European Union, in May 2004 – shortly after joining Nato.

Unlike Croatia or Bosnia-Herzegovina, Slovenia’s independence from Yugoslavia was almost bloodless. The country also found the transition from a state economy to the free market easier than most.

Long regarded as one of the best-performing new EU members, Slovenia was dragged into a deep recession by the European financial crisis in 2012.

Slovenia’s relations with Croatia have been strained on account of a rumbling dispute over sea and land borders dating back to the break-up of Yugoslavia.