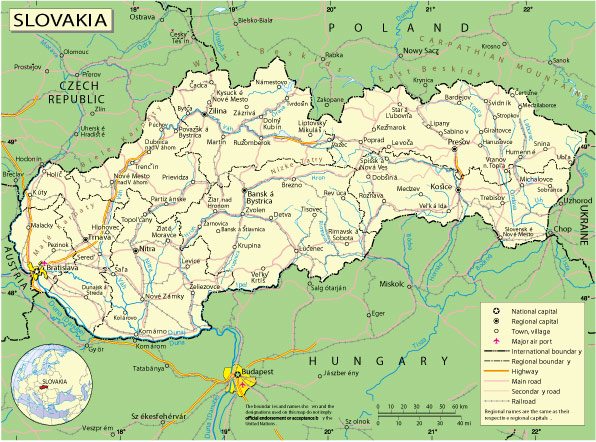 Slovakia
Country in Europe See also: Full version maps of Slovakia
Slovakia, officially the Slovak Republic, is a state in Central Europe. The population is 5,443,120 people, the territory is 48,845 km². It ranks 112th in the world in terms of population and 127th in terms of territory.
Capital: Bratislava
Population: 5.459 million

Right at the heart of Europe and with a history intertwined with that of its neighbours, Slovakia has proudly preserved its own language and distinct cultural traditions.

It was part of Czechoslovakia until the “velvet divorce” in January 1993.

Having uncoupled itself from its western neighbour, Slovakia at first struggled to prove itself as an independent democracy, but by the time of the twentieth anniversary of the “velvet divorce” in January 2013, it had come to be seen as one of Europe’s biggest success stories.

Slovakia joined the EU in 2004 and the eurozone in 2009. Its forces have taken part in the Nato-led operation in Afghanistan, and in peacekeeping duties in Kosovo.

Slovakia has a significant Romany population which suffers disproportionately high levels of poverty and social deprivation.