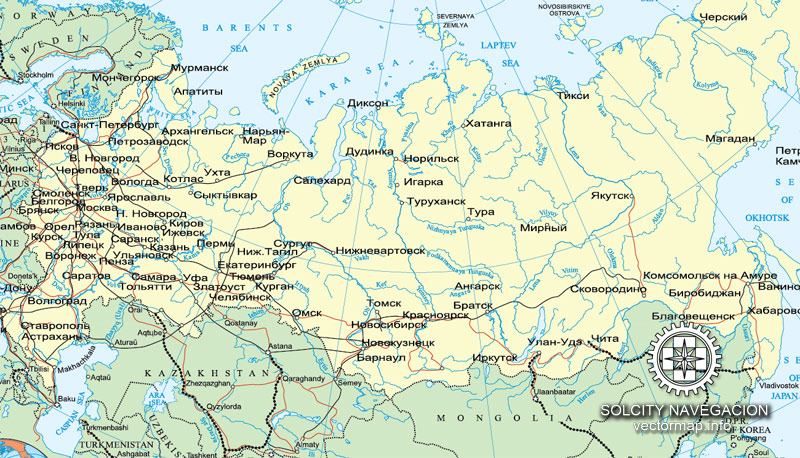 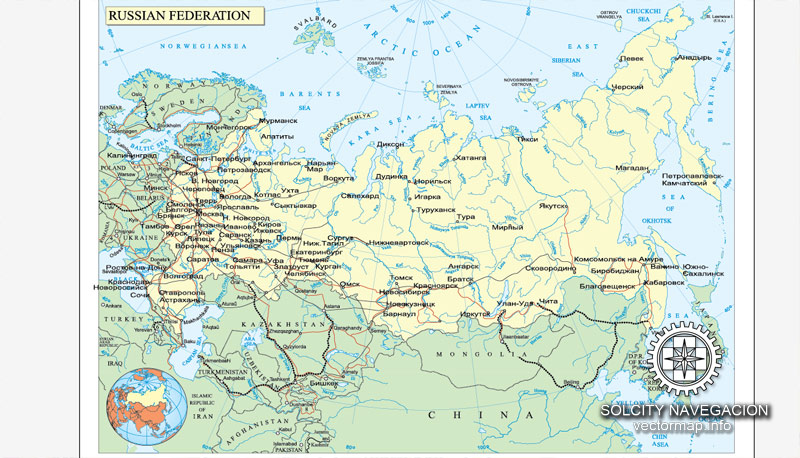 Russia, also officially known as the Russian Federation (Russian: Росси́йская Федера́ция, tr. Rossijskaja Federacija; IPA: [rɐˈsʲijskəjə fʲɪdʲɪˈratsɨjə]), is a federal state in Eurasia. At 17,075,200 square kilometres (6,592,800 sq mi), Russia is the largest country in the world by surface area, covering more than one eighth of Earth’s inhabited land area, and the ninth most populous, with over 146.6 million people at the end of March 2016. The European western part of the country is much more populated and urbanised than the East, about 77% of the population live in European Russia. Russia’s capital Moscow is one of the largest cities in the world, other major urban centers include Saint Petersburg, Novosibirsk, Yekaterinburg, Nizhny Novgorod and Samara.

Extending across the entirety of Northern Asia and much of Eastern Europe, Russia spans eleven time zones and incorporates a wide range of environments and landforms. From northwest to southeast, Russia shares land borders with Norway, Finland, Estonia, Latvia, Lithuania and Poland (both with Kaliningrad Oblast), Belarus, Ukraine, Georgia, Azerbaijan, Kazakhstan, China, Mongolia, and North Korea. It shares maritime borders with Japan by the Sea of Okhotsk and the U.S. state of Alaska across the Bering Strait.

The nation’s history began with that of the East Slavs, who emerged as a recognizable group in Europe between the 3rd and 8th centuries AD. Founded and ruled by a Varangian warrior elite and their descendants, the medieval state of Rus arose in the 9th century. In 988 it adopted Orthodox Christianity from the Byzantine Empire, beginning the synthesis of Byzantine and Slavic cultures that defined Russian culture for the next millennium. Rus’ ultimately disintegrated into a number of smaller states; most of the Rus’ lands were overrun by the Mongol invasion and became tributaries of the nomadic Golden Horde in the 13th century. The Grand Duchy of Moscow gradually reunified the surrounding Russian principalities, achieved independence from the Golden Horde, and came to dominate the cultural and political legacy of Kievan Rus’. By the 18th century, the nation had greatly expanded through conquest, annexation, and exploration to become the Russian Empire, which was the third largest empire in history, stretching from Poland on the west to Alaska on the east.

Following the Russian Revolution, the Russian Soviet Federative Socialist Republic became the largest and leading constituent of the Union of Soviet Socialist Republics, the world’s first constitutionally socialist state. The Soviet Union played a decisive role in the Allied victory in World War II, and emerged as a recognized superpower and rival to the United States during the Cold War. The Soviet era saw some of the most significant technological achievements of the 20th century, including the world’s first human-made satellite and the launching of the first humans in space. By the end of 1990, the Soviet Union had the world’s second largest economy, largest standing military in the world and the largest stockpile of weapons of mass destruction. Following the partition of the Soviet Union in 1991, fourteen independent republics emerged from the USSR; as the largest, most populous, and most economically developed republic, the Russian SFSR reconstituted itself as the Russian Federation and is recognized as the continuing legal personality and sole successor state of the Soviet Union. It is governed as a federal semi-presidential republic.

The Russian economy ranks as the twelfth largest by nominal GDP and sixth largest by purchasing power parity in 2015. Russia vector map in Adobe Illustrator’s extensive mineral and energy resources are the largest such reserves in the world, making it one of the leading producers of oil and natural gas globally. The country is one of the five recognized nuclear weapons states and possesses the largest stockpile of weapons of mass destruction. Russia is a great power as well as a regional power and has been characterised as a potential superpower. It is permanent member of the United Nations Security Council, as well as a member of the G20, the Council of Europe, the Asia-Pacific Economic Cooperation (APEC), the Shanghai Cooperation Organisation (SCO), the Organization for Security and Co-operation in Europe (OSCE), and the World Trade Organization (WTO), as well as being the leading member of the Commonwealth of Independent States (CIS), the Collective Security Treaty Organization (CSTO) and one of the five members of the Eurasian Economic Union (EEU), along with Armenia, Belarus, Kazakhstan, and Kyrgyzstan.

Russia’s territorial expansion was achieved largely in the late 16th century under the Cossack Yermak Timofeyevich during the reign of Ivan the Terrible, at a time when competing city-states in the western regions of Russia printable map had banded together to form one country. Yermak mustered an army and pushed eastward where he conquered nearly all the lands once belonging to the Mongols, defeating their ruler, Khan Kuchum.

Russia has a wide natural resource base, including major deposits of timber, petroleum, natural gas, coal, ores and other mineral resources.

Most of Russia consists of vast stretches of plains that are predominantly steppe to the south and heavily forested to the north, with tundra along the northern coast. Russia possesses 10% of the world’s arable land. Mountain ranges are found along the southern borders, such as the Caucasus (containing Mount Elbrus, which at 5,642 m (18,510 ft) is the highest point in both Russia and Europe scalable maps) and the Altai (containing Mount Belukha, which at the 4,506 m (14,783 ft) is the highest point of Siberia outside of the Russian Far East); and in the eastern parts, such as the Verkhoyansk Range or the volcanoes of Kamchatka Peninsula (containing Klyuchevskaya Sopka, which at the 4,750 m (15,584 ft) is the highest active volcano in Eurasia as well as the highest point of Asian Russia editable map in vector in Illustrator). The Ural Mountains, rich in mineral resources, form a north-south range that divides Europe and Asia.

Russia has an extensive coastline of over 37,000 km (22,991 mi) along the Arctic and Pacific Oceans, as well as along the Baltic Sea, Sea of Azov, Black Sea and Caspian Sea. The Barents Sea, White Sea, Kara Sea, Laptev Sea, East Siberian Sea, Chukchi Sea, Bering Sea, Sea of Okhotsk, and the Sea of Japan are linked to Russia via the Arctic and Pacific. Russia’s major islands and archipelagos include Novaya Zemlya, the Franz Josef Land, the Severnaya Zemlya, the New Siberian Islands, Wrangel Island, the Kuril Islands, and Sakhalin. The Diomede Islands (one controlled by Russia, the other by the United States) are just 3 km (1.9 mi) apart, and Kunashir Island is about 20 km (12.4 mi) from Hokkaido, Japan.
Volga River in Samara Oblast

Russia has thousands of rivers and inland bodies of water, providing it with one of the world’s largest surface water resources. Its lakes contain approximately one-quarter of the world’s liquid fresh water. The largest and most prominent of Russia vectorial map’s bodies of fresh water is Lake Baikal, the world’s deepest, purest, oldest and most capacious fresh water lake. Baikal alone contains over one-fifth of the world’s fresh surface water. Other major lakes include Ladoga and Onega, two of the largest lakes in Europe. Russia is second only to Brazil in volume of the total renewable water resources. Of the country’s 100,000 rivers, the Volga is the most famous, not only because it is the longest river in Europe, but also because of its major role in Russian history. The Siberian rivers Ob, Yenisey, Lena and Amur are among the longest rivers in the world.

Freebies? Yes, we also have a small collection of free printable maps for design, arts and printing.