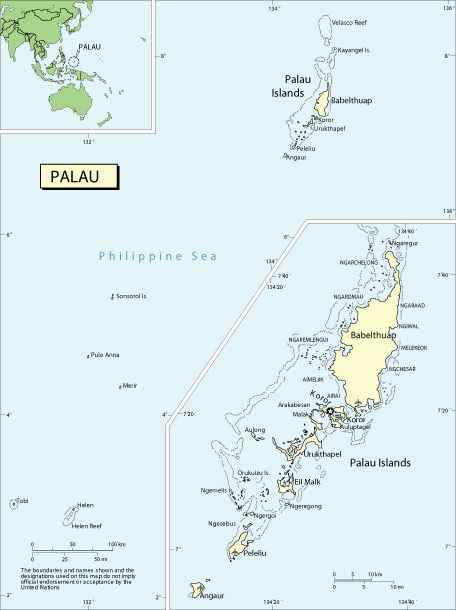 Palau
Country in Oceania.
Palau is an archipelago state in Micronesia in the Western Pacific Ocean, consisting of more than 500 islands. On the island of Koror is the city of the same name – the former capital and business center of the country. On the east coast of the larger Babeltuap Island are Ngerulmud, the modern capital of Palau, mountains and sandy beaches. In the northern part of the island, the ancient basalt megaliths of Badrulhau have been preserved, standing on grassy fields among palm trees.
Capital: Ngerulmud
Population: 18,092

More than 200 volcanic and coral islands, many of them surrounded by a single barrier reef, make up the northern Pacific nation of Palau.

The scenery ranges from white sandy beaches with an abundance of marine life to dense jungle. Palau favours sustainable tourism, which along with foreign aid is the mainstay of its economy.

Palau became independent in 1994, after being part of a United Nations trust territory administered by the US for 47 years.

It relies on financial aid from the US, provided under a Compact of Free Association which gives the US responsibility for Palau’s defence and the right to maintain military bases there. Direct aid was set to wind up in 2009, but the US agreed to an additional package of $250 million in January 2010.

Tourism is low key, although growing in economic importance. Many visitors come from Taiwan, with which Palau has diplomatic ties. Taiwanese aid boosts the economy. The government is Palau’s largest employer.

Monoliths and other relics are reminders of an ancient culture that thrived on the islands, and despite Western trappings many Palauans identify strongly with their traditions and rites.

Palau’s recent history has been dominated by outside influences from Spain, Britain, Germany, Japan and the US. Palau saw some of the region’s fiercest fighting in World War II.

There is concern that the low-lying islands could be badly affected by rising sea levels possibly due to climate change.