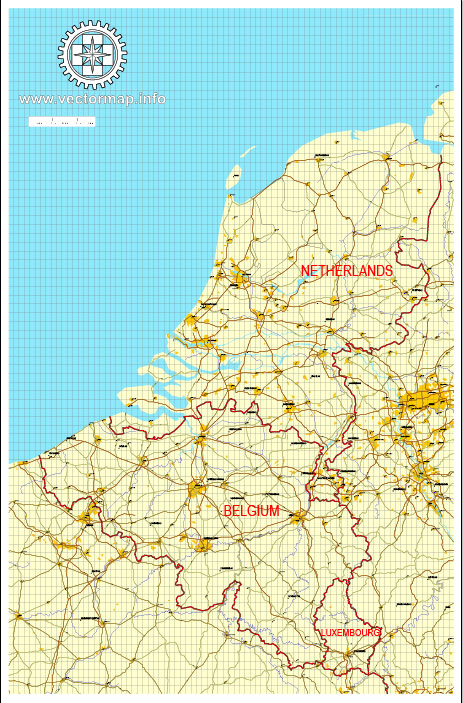 Belgium
Country in Europe. See also: Full versions vector map of Belgium
Belgium is a country in Western Europe known for its medieval towns and renaissance buildings. In the north of the country, in Flanders, they speak Dutch, and in the south, in Wallonia, they speak French. There is a large German-speaking community in the east of Belgium. The country’s capital, Brussels, whose inhabitants communicate in both Dutch and French, is famous for its ornate guild houses on the Grand Place and elegant Art Nouveau buildings. The city is home to the headquarters of the European Union and NATO.
Capitals: Brussels, Brussels-Capital Region
Area: 30,688 km²
Population: 11.56 million

Netherlands
Country in Europe. See also: Full versions vector map of Netherlands
The Netherlands is a flat country in northwestern Europe known for its canals, tulip fields, windmills and bike paths. The Rijksmuseum Art Museum, the Van Gogh Museum and the house where the Jewish girl Anne Frank wrote her diary during World War II are located in the capital of the state, Amsterdam. Mansions along the canals, as well as famous paintings by Rembrandt and Vermeer, have been preserved from the Golden Age of the Netherlands (XVII century).
Capital: Amsterdam
Area: 41,543 km²
Population: 17.44 million

Luxembourg
Country in Europe. See also: Full versions vector map of Luxembourg
Luxembourg is a small European country bordered by Belgium, France and Germany. In the north of the country are the Ardennes, covered with dense forests, and natural parks, in the east – the rocky gorges of the Müllerthal region, in the southeast – the vineyards of the Moselle river valley. The capital of Luxembourg with the same name is famous for its fortified medieval old town, crowning sheer cliffs.
Capital: Luxembourg
Area: 2,586 km²
Population: 632,275