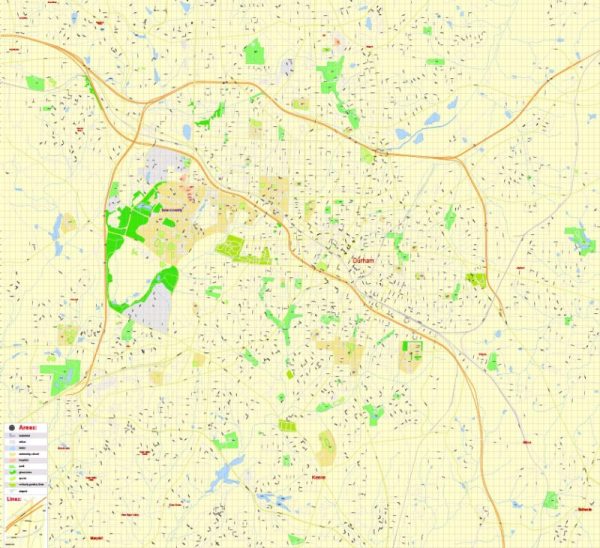 Vector Maps of the Duke University : private coeducational institution of higher learning in Durham, North Carolina, U.S., affiliated with but not controlled by the United Methodist Church. In 1838 a regular program of education was initiated at a schoolhouse in Randolph county, to the west of Durham, and a year later the Union Institute Society was established to support and govern the school. The institution was initially incorporated as an academy; it reorganized as Normal College in 1851, changed its name to Trinity College in 1859, and moved to Durham in 1892. When a new charter was issued in 1924, the college became, under an endowment from the tobacco magnate James Buchanan Duke, Duke University; it was named for his father, Washington Duke, who had funded Trinity College and had persuaded its board of trustees to move the school to Durham.

All of our editable Duke University Durham North Carolina vector maps are digital files,
which can be instantly downloaded in editable PDF or Adobe Illustrator format.
Objects on maps are usually divided into layers according to their types – lines, polygons, street names, object names (see map description!!!!)
Each of our Duke University Durham North Carolina digital maps is available in Adobe Illustrator or editable PDF format, (or on request in any other known format for the same price)
which use a vector approach to display images,
you can easily enlarge any part of our maps without compromising text, line or graphic quality,
with any increase or decrease ratio.
Using a vector graphics editor such as Adobe Illustrator, CorelDraw, Inkscape, or Freehand
you can easily crop parts of the map, add custom characters, and change colors and font attributes as needed.
We have a variety of Duke University Durham North Carolina vector maps with different levels of detail, from simple empty paths to highly detailed maps with roads and terrain layers.

Don’t see exactly what you’re looking for? Contact us to receive a special offer for an individual Duke University Durham North Carolina map for your project.