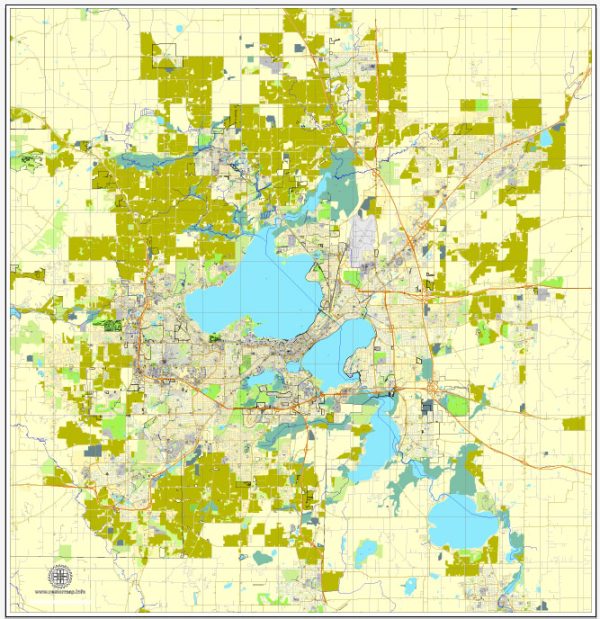 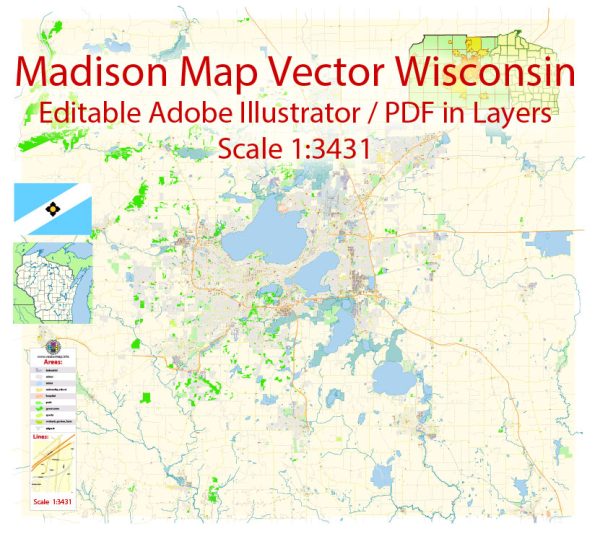 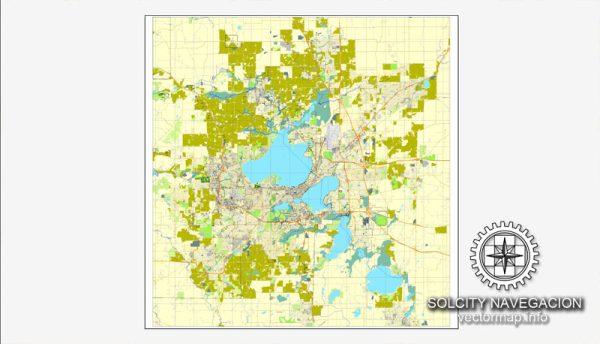 Vector Maps of the Madison : city, capital (1838) of Wisconsin, U.S., and seat (1836) of Dane county. Madison, Wisconsin’s second largest city, lies in the south-central part of the state, centered on an isthmus between Lakes Mendota and Monona (which, with Lakes Waubesa and Kegonsa to the southeast, form the “four lakes” group), about 75 miles (120 km) west of Milwaukee. Sauk, Fox, and Ho-Chunk Nation (Winnebago) Indians were early inhabitants of the area. It was founded by James Duane Doty, a former federal district judge and a land speculator who held large holdings in the area, in 1836 (a year of frenzied land speculation in the newly created Territory of Wisconsin) and was named for President James Madison, who had died that summer. That same year Doty persuaded the legislature to make Madison the permanent capital of Wisconsin and to establish a university there. The wooded site was still uninhabited, but construction of a capitol building was quickly begun, and late in 1838 the territorial legislature held its first session in a nearby building. Wisconsin became a state in 1848, and, through the efforts of Leonard J. Farwell, a wealthy businessman from Milwaukee, industries began to locate in the city about 1850. The railroad arrived in 1854, and steady development ensued.
Area:
• City: 101.53 sq mi (262.96 km2)
• Land: 79.57 sq mi (206.09 km2)
• Water: 21.96 sq mi (56.88 km2)

All of our editable Madison Wisconsin vector maps are digital files,
which can be instantly downloaded in editable PDF or Adobe Illustrator format.
Objects on maps are usually divided into layers according to their types – lines, polygons, street names, object names (see map description!!!!)
Each of our Madison Wisconsin digital maps is available in Adobe Illustrator or editable PDF format, (or on request in any other known format for the same price)
which use a vector approach to display images,
you can easily enlarge any part of our maps without compromising text, line or graphic quality,
with any increase or decrease ratio.
Using a vector graphics editor such as Adobe Illustrator, CorelDraw, Inkscape, or Freehand
you can easily crop parts of the map, add custom characters, and change colors and font attributes as needed.
We have a variety of Madison Wisconsin vector maps with different levels of detail, from simple empty paths to highly detailed maps with roads and terrain layers.

Don’t see exactly what you’re looking for? Contact us to receive a special offer for an individual Madison Wisconsin map for your project.