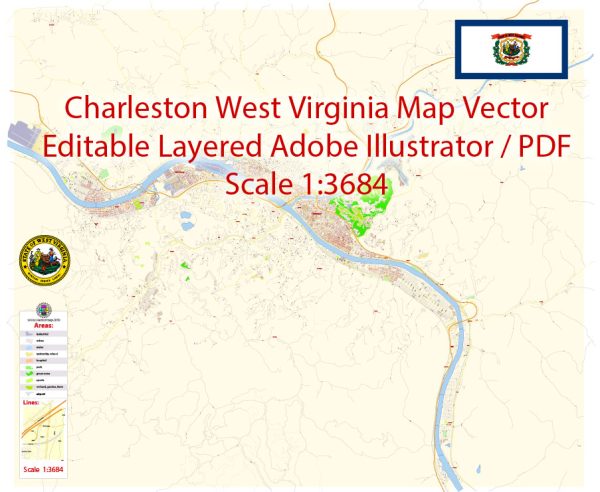 Vector Maps of the Charleston : city, capital of West Virginia, U.S., seat of Kanawha county, and the largest city in the state. It is situated in the Allegheny Mountains, at the confluence of the Elk and Kanawha rivers (there bridged to South Charleston), in the south-central part of the state.
The settlement developed on land purchased by Colonel George Clendenin in 1787; the patent for the land was signed by then governor Thomas Jefferson. Clendenin built Fort Lee there in 1788, and the town was chartered in 1794; first named Charles Town, for Clendenin’s father, it was renamed Charleston in 1819. Because it lay on the migration route to the Ohio River valley, the settlement soon became a transshipment point and attracted such frontier figures as Daniel Boone, Simon Kenton, and Ann Bailey. The town utilized local brine wells as early as 1795 and was an important center of salt production in 1824, when the first steamboat arrived.
Area:
• City: 32.64 sq mi (84.54 km2)
• Land: 31.50 sq mi (81.59 km2)
• Water: 1.14 sq mi (2.95 km2)

All of our editable Charleston West Virginia vector maps are digital files,
which can be instantly downloaded in editable PDF or Adobe Illustrator format.
Objects on maps are usually divided into layers according to their types – lines, polygons, street names, object names (see map description!!!!)
Each of our Charleston West Virginia digital maps is available in Adobe Illustrator or editable PDF format, (or on request in any other known format for the same price)
which use a vector approach to display images,
you can easily enlarge any part of our maps without compromising text, line or graphic quality,
with any increase or decrease ratio.
Using a vector graphics editor such as Adobe Illustrator, CorelDraw, Inkscape, or Freehand
you can easily crop parts of the map, add custom characters, and change colors and font attributes as needed.
We have a variety of Charleston West Virginia vector maps with different levels of detail, from simple empty paths to highly detailed maps with roads and terrain layers.

Don’t see exactly what you’re looking for? Contact us to receive a special offer for an individual Charleston West Virginia map for your project.