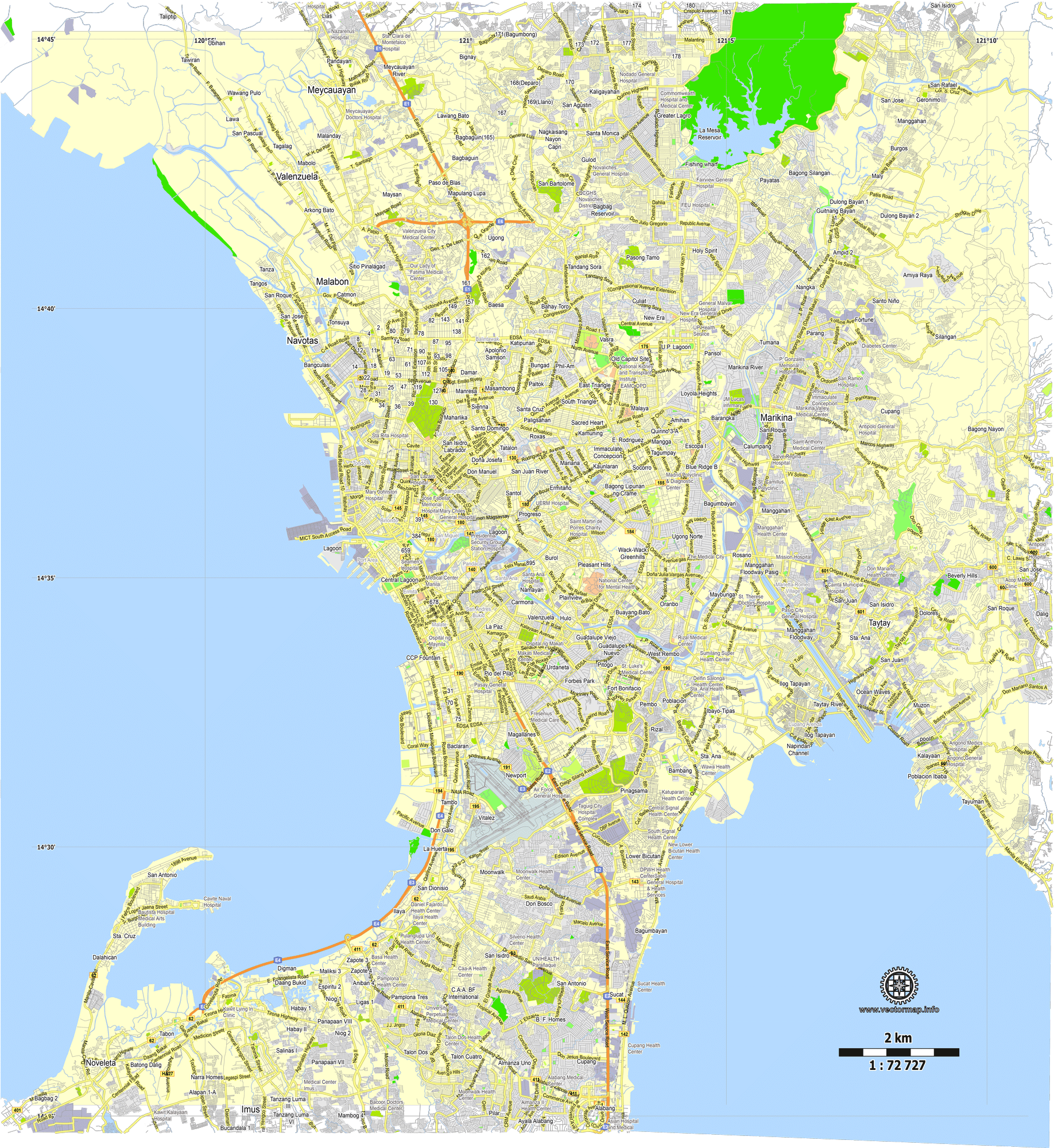 VectorMap  of the Philippines, Manila

Manila is the capital of the Philippines, one of the largest megacities of Southeast Asia, is the main "gateway" of the country, therefore, most likely, you will find yourself in Manila for the first time on the land of the Philippines.

According to subjective feelings, modern Manila is very similar to cities like Moscow or Los Angeles. It combines rich business districts, a cultural and historical center, expensive residential areas and a whole quarter of the poor (Tondo). You will see the skyscrapers of Makati and the villas of the Forbes Park area surrounded by high fences, where the richest people of the city live. Representatives of the middle class, as a rule, live in the suburbs, going to work in the morning on roads crowded with cars. Traffic jams in Manila are as much an integral part of life as in Moscow.

A huge metropolis - Metro Manila - consists of 14 separate cities and three municipalities with more than 11 million inhabitants. The core of Manila consists of the districts of San Nicolas, Santa Cruz, Binondo and San Miguel, which are adjacent to Intramuros, Ermita, Malate and Paco. A little further there are other areas included in Metro Manila, such as Quezon City, Makati, Kalukan, Pasay, Pasig, etc. Perhaps the majority of hotels are concentrated in the Ermita and Malate districts. Some of them are located along Roxas Boulevard, which stretches along the coast. Stop here if you plan to devote time to sightseeing and exploring the city on your own. If you are in Manila on business, then most likely Makati, the business and financial center of the city, is more suitable for you. It is here that the most luxurious hotels and the best shopping centers are concentrated.

Arriving in Manila, stay here for 2-3 days. We recommend taking a sightseeing tour of the city, visiting the historical center of Intramuros, the Church of St. Augustine and the museum located in it, Chinatown and the Chinese cemetery, the metal church of St. Sebastian and the famous bamboo organ in Las Piñas. From Manila, it is also convenient to explore the sights of Luzon Island.

After the tour, visit one of the many spas, have lunch at a Filipino restaurant, stop briefly on Roxas Boulevard to watch the sunset, and walk through the shopping center closest to the hotel. If you still have the strength, spend the rest of the evening in a bar with live music.

The history
of the "Glorious and forever faithful city" - this was the name of Manila in 1574 by the Spanish king Philip II, after whom the country of the Philippines got its name.

A town or settlement called Maynilad (after the name of a mangrove tree growing on the banks of the Pasig River) existed at this place even before the arrival of the Spaniards on the archipelago. At the beginning of the XIV century, more than 6,000 people lived in it, who not only cultivated nearby lands, but also handled firearms (muskets and cannons) perfectly, Miguel Lopez de Legazpi drew attention to a convenient bay near the city, defeated the local Muslim rajah in 1571 and founded a fortification on this place. The new fort was named Fort Santiago (after Saint Tiago de Matamata, the conqueror of the Moors). On June 24 of the same year, Manila became the capital of the Philippines.

After the arrival of the Spaniards, the subjects of the Rajahs from Borneo, Chinese and Japanese pirates tried to capture Manila several times. For the defense of the city at the beginning of the XVII century was built Intramuros, "the city inside the walls", with bastions and forts, cathedrals, churches and stone houses. Missionaries who arrived in the Philippines (Augustinians, Franciscans, and later Jesuits) mastered the areas adjacent to Intramuros.

For a long time, Manila was a transit point on the way from China to Mexico. At first, goods from Asian countries were brought to the city, then bought by Spaniards and sent for sale to Mexico. Gradually, local goods began to be exported from the Philippines through Manila - sugar cane, coffee, tobacco, the appearance of the city and partly the way of life underwent significant changes after the earthquake of 1863. New houses and streets were built on the model of American ones, an unprecedented miracle of technology appeared in some houses - an elevator, and the first cinemas in Asia were opened for cultural leisure. In the XIX century, travelers described Manila as "unpleasant" and "very expensive" (more expensive than Singapore or Batavia), a city inhabited by 200,000 inhabitants, but noted that the city is well fortified, has wide, cobblestone streets and large houses.

The second time the city was seriously damaged during World War II: first, the retreating Japanese destroyed the city on the principle of "scorched earth", then the Americans bombed, destroying the remaining Japanese garrison. Suffice it to say that of all the capitals of the world affected by the war, only Warsaw suffered more than Manila. Even Berlin and Tokyo are better preserved. However, in a very short time the city was restored.

Manila's public transport system is chaotic and confusing. Buses and jeepneys are cheap, but usually crowded and have no air conditioning. Together with taxis and private transport, they create endless traffic jams, which does not add comfort. At the same time, walking is impossible, except for short distances. Some order is introduced by the light metro lines: the yellow Metrorail line (LRT1) connecting Caloocan City and Pasay City; the purple Megatren line (MRT2) connecting Pasig City and Santa Cruz; the blue MetroStar Express line (MRT3) connecting Queson City and Pasay City. The most used line by tourists is LRU, thanks to which you can get, for example, to Intramuros, Chinatown, EDSA bus terminal. At the EDSA station, you can transfer to the Taft station of the MRT3 line, along which several large shopping centers are located: Ayala, Shangri-La Plaza, SM, Robinsons, Greenhills. The LRT and MRT3 lines operate from 06.00 to 22.00, and MRT2 from 05.00 to 20.00. The ticket price depends on the number of stations you need to pass and is 10-15 pesos. Please note that despite the fact that the metro stations are open, it is forbidden to eat, drink and smoke on them, as well as in the cars themselves.

The payment systems for buses and jeepneys are the same - a certain amount for boarding and the first few kilometers + extra for each kilometer. For the bus, depending on the comfort and availability of air conditioning, it is 10-12 pesos (the first 5 km) + 1.95-2.35 pesos for each subsequent kilometer. For jeepneys - 8 pesos (the first 4 km) + 1.50 pesos for each subsequent kilometer. Each bus has a sign on the front with the final destination, but it is not reported which route it will take and where exactly it will stop. Jeepneys operating in the mode of a fixed-route taxi have a more detailed description of the route (usually on the side and on the windshield), informing the main stops on the way.

A trip in a regular taxi costs 30 pesos for boarding + 2.5 pesos every 300 meters. For yellow taxis of the "premier class" - 70 and 4 pesos, respectively. Usually, a trip to Manila costs 60-180 pesos. You can get from Manila to the airport for 200-300 pesos. They will help you call a taxi at any hotel and shopping center.