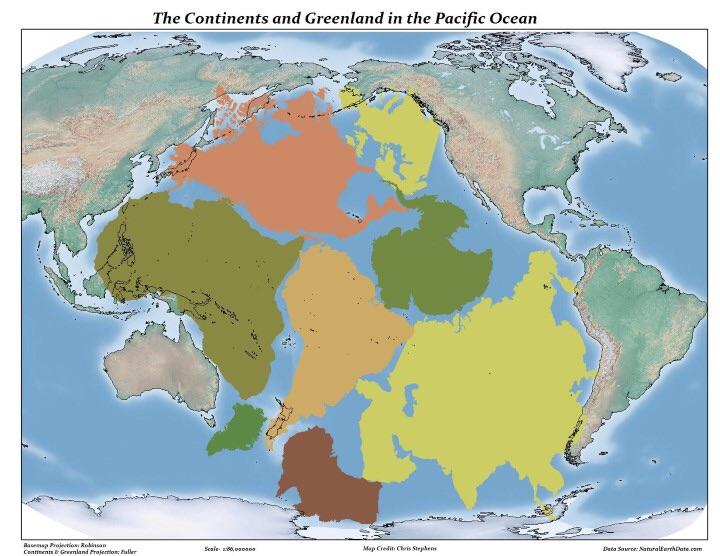 The strong currents:
warm North Equatorial, South Equatorial, Kuroshio current, East Australian;
— cold – Westerly, Peruvian, Californian.
The Pacific ocean occupies a third of the earth’s surface and half of the world’s oceans. Almost in the middle, it crosses the equator. The Pacific Ocean washes the shores of five continents:
— Eurasia from the Northwest;
— Australia from the South-West;
— Antarctica from the South;
— South and North America from the West.

In the North through the Bering Strait it connects with the Arctic ocean. In the southern part of the conventional boundaries between the three oceans – the Pacific and the Indian, Pacific and Atlantic – held through the meridians, from the extreme South of the mainland or the island point to the Antarctic shores.
The Pacific ocean is the only one that is almost completely located within the boundaries of the ode of the lithospheric plate – the Pacific. In places of its interaction with other plates there are seismically active zones that create the Pacific seismic zone, known as the “ring of Fire”. The edges of the ocean, on the borders of the lithospheric plates is located the deepest part of the ocean trench. One of the main features of the Pacific ocean are tsunami waves that occur as a result of underwater eruptions and earthquakes.
The climate of the Pacific ocean is due to its location in all climatic zones except the polar. Most precipitation is in the area of the equator – up to 2000 mm. Due to the fact that the Pacific ocean is protected by land from the influence of the Arctic ocean, its Northern part is warmer than the South.
In the Central part of the ocean trade winds reign. Destructive tropical hurricanes – typhoons, which are characteristic of monsoon air circulation, characteristic of the Western Pacific ocean. Storms are frequent in the North and South.
In the North Pacific, there is almost no floating ice, because the narrow Bering duct limits the connection with the Arctic ocean. And only the Okhotsk and Bering seas are covered with ice in winter.
The flora and fauna of the Pacific ocean is rich and diverse. One of the richest in species composition of organisms is the sea of Japan. Coral reefs of tropical and Equatorial latitudes are particularly rich in life forms. The largest coral structures is the Great barrier reef (Great coral reef) near the East coast of Australia, where tropical fish species, sea urchins, stars, squids, octopuses live… Many species of fish are of commercial importance: salmon, chum salmon, pink salmon, tuna, herring, anchovies…
In the Pacific ocean since saucy: whales, dolphins, seals, Sea beavers (found only in the Pacific ocean). One of the features of the Pacific ocean is the presence of giant animals: blue whale, whale shark, king crab, clam tridacna…
More than 50 countries with almost half of the world’s population live on the shores of the Pacific ocean.
The beginning of the development of the Pacific ocean Europeans put Fernand Magellan (1519 – 1521), James Cook, A. Tasman, W. Bering. In XVIII-XIX centuries are particularly important results were of the expedition of the British ship “Challenger” and the Russian “Vityaz”. In the second half of the twentieth century, interesting and diverse studies of the Pacific ocean conducted Norwegian Thor Heyerdahl and Frenchman Jacques-Yves Cousteau. At the present stage, specially created international organizations are engaged in studying the nature of the Pacific ocean.