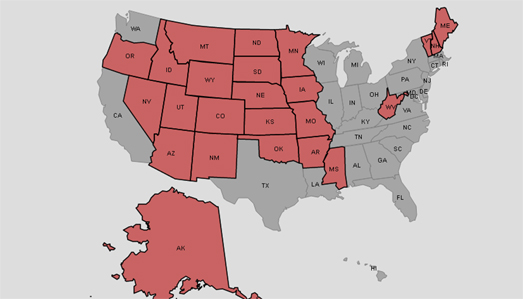 In the last seven weeks 33.5 million people have filed for unemployment in the United States. On Wednesday Automatic Data Processing, the US’s largest payroll processor, announced that 20 million jobs had been lost in the private sector in April alone.

At the end of last month the Urban Institute did a good job of mapping where jobs have been lost across the United States. The Where Low-Income Jobs Are Being Lost to COVID-19 interactive map visualizes the estimated numbers of jobs lost in counties across the country. It also allows you to visualize the job losses in each individual industry by county.

The sheer scale of the numbers of jobs lost in the United States is actually quite hard to visualize. However Engaging Data has given it a go. It has devised an interactive map which allows you to compare the number of workers who have filed for unemployment in the last seven weeks in comparison to the entire workforce of U.S. states. For example the map above shows that the 33.5 million people who have recently filed for unemployment is the equivalent of the entire workforce of all the states colored red.

The Engaging Data map includes a number of different views which allow you to view job losses in comparison to the workforce of random states, the most states, the least states and  by the largest and smallest area.