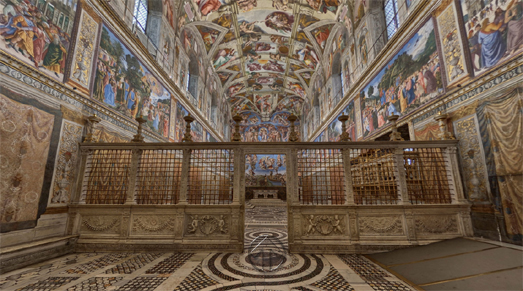 Saint Peter’s Square and the Sistine Chapel may now be closed. However the Vatican Museum’s website is still open and so is its Sistine Chapel Virtual Tour.

The Sistine Chapel Virtual Tour allows you to take a virtual stroll around the chapel and examine Michelangelo’s extraordinary painted ceiling. The Sistine Chapel is where the papal conclave meets to elect a new pope. The interior of the chapel is covered in colorful frescos, most famously the chapel’s ceiling features nine scenes from the Book of Genesis, painted by Michelangelo.

The Sistine Chapel Virtual Tour consists of a series of connected 360 degree panoramic images. Arrows in the images allow you to stroll around the chapel. Like Google Maps Street View images you can rotate around within each image and zoom into details on the chapel’s glorious frescos. For example, you can zoom in on Michelangelo’s The Creation of Adam (pictured above), in which the hands of God and Adam nearly touch.

The central section of the ceiling contains nine scenes painted by Michelangelo in the early 16th Century. These nine scenes from the Book of Genesis depict God creating the Heavens and Earth, God creating the first man & Woman, Adam and Eve, and the story of the flood and Noah.