Vector Maps: The Dots of Connectivity and Broken Cultural Links 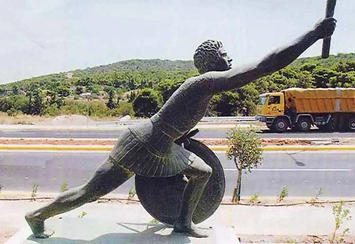 “We won,” the messenger announced, and then collapsed, and so becoming the most renowned victim of connectivity, spearheading the Marathon legacy. Pheidippides’ death encapsulates the quest for and risks of connectivity; we see it as tragic and unnecessary because we now take it for granted that a message and its messenger can be separated. But when the message is the messenger, as in, reporting for work, the risk is real, witnessed by over a million annual road deaths globally as well as the ongoing coronavirus pandemic. In this piece, we look at the concept of connectivity’s many facets, the range of its manifestations, and its outcomes to understand what role planners can play in shaping its effects.

Current interpretations of connectivity in cities confine it to its topological meaning: dots and lines sprinkled over a street map to visualize “links,” “nodes, “route directness,” etc. This mechanistic focus produces a seemingly “rational” index of connectivity with a theoretically “perfect” score and, therefore, a “scientific” base for laying out city districts. Although counting links and nodes has been shown to produce inconsistent results, nevertheless, it persists due to its simplicity. Critically, it also ignores a key topological variable—scale—which relates to the travel distance, a factor that indisputably limits accessibility (Fig. 1). The Marathoner’s death can be justifiably attributed to the extraordinary distance, uncommon speed, and innate limits of endurance. An alternative technique, which does encompass distance—counting city block sizes—still leaves out speed and endurance, variables that elude representation on a plan.

Fig 1. Two layouts with identical indices of connectivity but with substantially different outcomes. Assuming prevalent city block dimensions, district A would take three minutes to cross, while B, six minutes or plausibly longer for incidental pairs of Origin-Destination: a time-less, and exertion-less index number loses its utility.

Both methods of measurement bypass human variability; the presence of speed-enhancing and effort-reducing technology; and sociocultural trends. It treats agents as mechanical walking toys and a city as a Lego set.

Such a view runs contrary to ideas of contemporary urban thinkers (e.g., Michael Mehaffy and others), who recognize cities as self-organizing, adaptive organisms, as I argued in a recent article. It is known, for example, that typical agents will often choose an “imperfect,” longer route for its attractiveness, challenging the top-down ideal order derived from aesthetic or mechanistic mindsets. An instructive example of such a rigid approach is the application of a rectilinear grid defying a sloping grade (e.g., San Francisco, Piraeus, Lisbon, etc.). Though it looks similar to fig 1 on a map, on the ground, it precludes bicycling entirely and tests pedestrians’ endurance, thus rendering “nodes-and-links” calculations irrelevant: High connectivity index yet demonstrably ineffective for active modes (Fig 2). 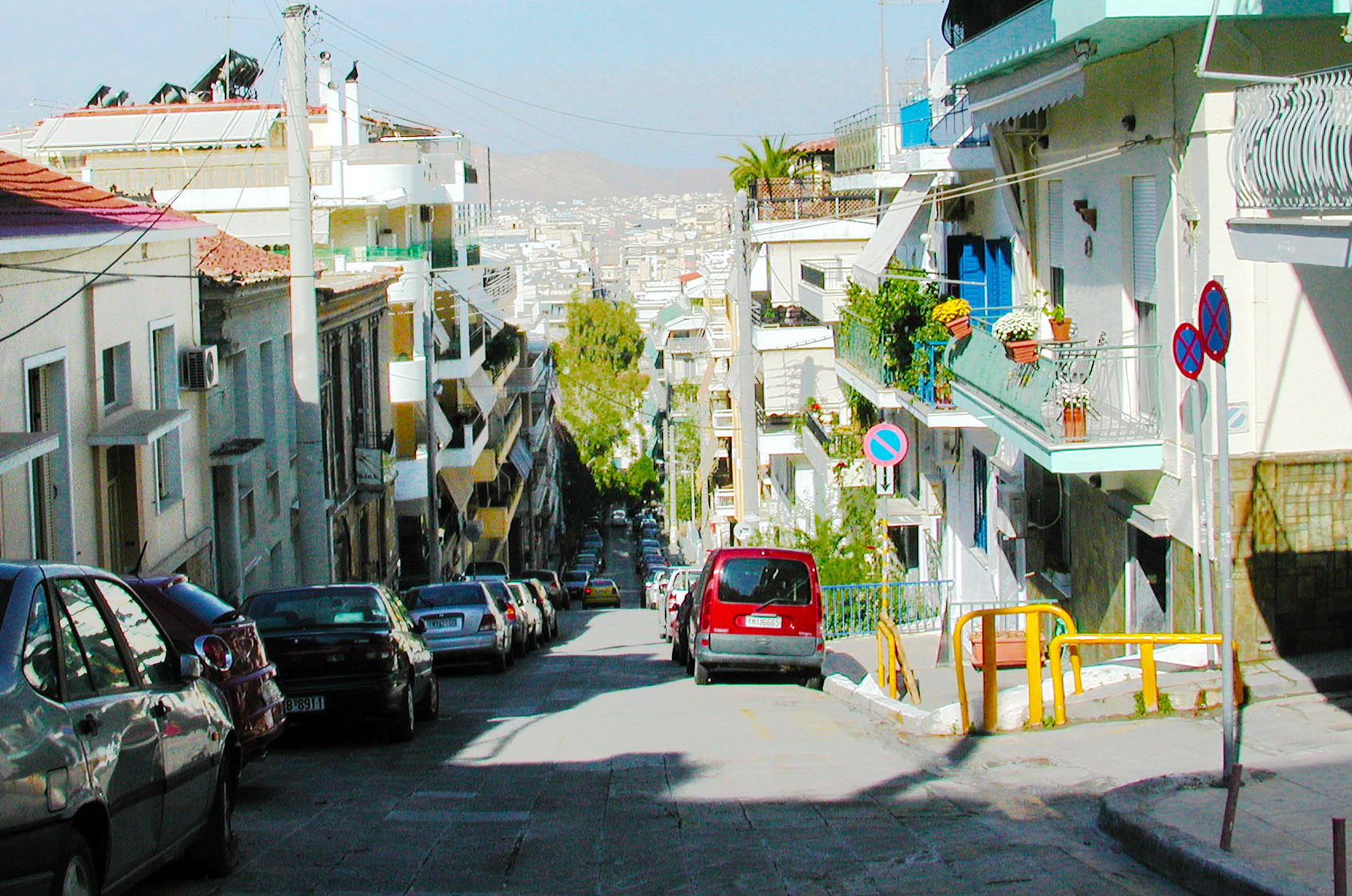 Fig. 2. Context relevance: The application of a “perfect” geometric solution on a hilly site undercuts the validity of calculations that generated it. (Image: a street in Piraeus.)

A completed connection always begins with an intent, be it utilitarian, altruistic, obligatory, or discretional. Getting to work, for example, is utilitarian and non-discretional; going to church, on the other hand, is neither. Historically, going to work could mean descending to the shop/workshop at grade or, alternatively, a long walk to the fields. More recently, it means taking the bus, train, car, or even plane for a 30-45 minute ride or, alternatively, staying put and logging onto a secure site. Going to church could mean choosing between five in a town of the 1800s—a short walk—or, currently, having only one choice in a large diocese, beyond reach on foot. These cases of widely differing choices show the effect of socio-cultural patterns on connectivity. Viewing connectivity as just a problem of geometry, with a purely analytical solution, blurs both intent and context out of view and, consequently, risks becoming unrealistic and irrelevant. It is critical to consider what people connect for and how, not just dots on a sheet of paper.

To illustrate intent and cultural context for connecting, we look at a few universal examples that dominate a person’s movements: keeping up with the news, going to church, and finding a mate for life, excluding, for now, several other important examples for brevity.

The urgent, vital need for news killed the marathoner messenger. Keeping up with events has since transitioned from the public square, where the spoken word was heard at the barber’s, pub, tavern, or, after the 17th century, the coffee shop. The press link took over and delivered the news to door stoops and at main street corners. More links were soon added in accelerating pace: telegraph, telephone, radio, television, Internet, and, recently, the smart phone. Each additional conduit of getting or passing news reduced effort while increasing its speed. The public square effectively moved into every home. Almost all of public life now takes place in living rooms anywhere and everywhere, face to digital face (Fig 3). The links to the town square—a street network – became a museum piece, wholly ineffective for satisfying the news crave; its academic connectivity index irrelevant. Keeping current, is more than an idle occupation; it uncovers vital opportunities and forestalls increasing risks (a need more acute in times of crisis).

Do these profuse and effortless links have negative outcomes? Yes: evidently many, and, in cases, serious. A prominent example, the “couch potato,” is now a cultural symbol of sedentary lifestyle, associated predominantly with watching TV voluntarily for long spans of time. “At least 300,000 premature deaths, and $90 billion in direct healthcare costs are caused by obesity and sedentary lifestyle per year in the US alone” (PubMed). The telephone, another example, is the cause for one in ten U.S. adults being defrauded of $430 on average (2016), totaling 9.5 billion. The smart phone mutated to a popular forum for bullying and shaming and has triggered a few well-documented deaths. No connectivity mode is free of risk.

Positive impacts are also many, enormously beneficial and well known (left out for brevity) but one example brings out its highest value: education at any distance. If street connectivity had in some cases been an impediment to positive or negative outcomes, it is now immaterial.

The first building to be built by early settlers, after their own rudimentary shelters, was a humble house of God. As the community grew and diversified so did its number and types. Going to church always has been a critical act of participation in the life of the community and for the life of the person – a symbiotic relationship. “Between 1700 and 1740, an estimated 75 to 80 percent of the population attended churches, which were being built at a headlong pace” (Library of Congress).

Figure 4.Going to church: The changing nature of religiosity, congregations, participation, and attendance. Data from Gallup paper and survey (2019). These attendance figures have been questioned here as inflated.

Two centuries later (1992), 70% of citizens said they belonged to a church group, but only 35% attend service every week, while 14% attended never. A generation later (2019), membership and weekly attendance dropped by roughly a third and the non-attendance doubled (Fig 4). This cultural trend creates another: church closures in the thousands per year (Ref: One, Two – CND). Closures in turn create a new backdrop for connectivity: Distances to the nearest church of a preferred denomination increase. This place reduction coupled with ongoing city expansion renders walking to church unfeasible, particularly for a mainly senior congregation and for special needs users (e.g., mothers with small kids). But, unlike previous centuries’ churchgoers, current churchgoers have mobility options that obliterate distance and effort and render geometric “route directness” academic.

A consequential link in a person’s life is that with a lifelong mate. Nothing exemplifies better the influence of the mediating social and technological infrastructures (i.e., current culture) than satisfying this intent. Statistics show (Fig 5) that place-related venues have diminished in importance and overtaken by the place-less Internet. Individuals now link up not only with residents of the same city (a link previously made through printed “small ads”), but also across an entire country. And as the spatial range exploded, so has the choice of future partners. Since initial approaches are exploratory, practically effortless, and often aided by algorithms, this venue undoes all the limitations of the small town’s perennial pursuit of limited “eligible” candidates, and dissolves the restrictive biases of proximate social circles. Street connectivity in this pursuit via the Internet becomes entirely meaningless.

Figure 5. Finding a mate for life: In less than a generation online bonding has increased and overtaken all other mediators in absolute percentage. Only the restaurant/bar venue also saw a rise. Four unnamed conduits whose effect diminished are primary/secondary school, college, neighbours and church. (Data source: How Heterosexual US couples meet their romantic partners. Michael Rosenfeld [pdf])

Interconnected: The Web Thickens and Expands

Writer after writer serves the same refrain: the city is a web of connections, and reflexively turn to its bricks and cobblestones, the built environment. The city must be interconnected: and they point to a street configuration that loosely resembles the knots and links of a fishnet. However, a conduit will carry agents if and only if they choose to use it. A cyclist will not use a Piraeus street (fig.2) because of its steepness and a bull-and-cart or a motorist will not use a Fez street (fig.3 and this) due to its narrowness. Connected they are, but they are also inaccessible to certain users. And they are inaccessible because they were created before these users were prevalent. This chronological disjunction underscores the question of context: who the links are for and what they link to.

As the species of transport multiply, so too do the conflicts between them, and, inevitably, the complexity of laying out a network of routes that fully serves each species. “Links and Nodes” and “ideal” topological connectivity scores miss the cultural context of users, their intent, and conduit options.

The traditional concepts of connectivity also miss the context of the parallel universe of links and nodes that are entirely separate from the built environment and its ground-based means of transport. Moreover, they ignore the self-organization of the city that, responding to economic and technological forces outside its control, reshapes itself in ways that redefine connectivity and accessibility. They also redefine speed and effort and, with them, the scale of connectedness—from town to metropolis to megalopolis and to the globe. The connectivity web thickens, expands, and, inadvertently, lowers the primacy of the built environment as a connector.

This piece first appeared on Planetizen, reproduced here with permission.

Fanis Grammenos is the director of Urban Pattern Associates in Ottawa, Ontario and the author of Remaking the City Grid: A Model for Urban and Suburban Development (i.e., the Fused Grid). Reach him by email with questions or comments.

Photo credit: Hammer of the Gods27 via Wikimedia under CC 3.0 License.