The pause button may have been pressed on substantial segments of infrastructure development, repair, and replacement—but not on all.

No matter how long it takes to fully resume, the sheer scale of design and construction necessary to meet future global infrastructure needs is staggering. It’s projected that by the year 2035 the global middle class will swell by three billion people, all demanding new, improved, more efficient and greener infrastructure—equivalent to that of six Europes. A digital twin can help.

The heavy civil engineering and construction industry will never be able to meet such demand with legacy tools and processes, and most definitely not with analog tools.

The concept of merging engineering efficiencies and digital processes for all phases of construction and infrastructure life cycles is not new—some call this constuctioneering. The key mechanism to bring design, cost, scheduling, billing, tracking, as-built feedback loops—all elements of project management—together is digital twins.

If anything, the current situation has folks learning about and gearing up for the use of more digital tools, using remote collaboration, and adopting process automation. Eventual adoption of these as standard will become an imperative. The tools are here (mostly) for a digital twinning revolution, but how far along are we in realizing this?

Where Is the Data I Need?

In a recent virtual presser hosted by Bentley Systems, representatives from three major construction firms—AECOM, Foth, and Lane—provided frank insights into their own adoption of digital twins. While each reported positive progress and provided examples of successful implementation, for brevity we will have to elaborate on each in subsequent posts. Each provided unique angles.

To illustrate a key concept behind digital twins, the following focuses on the presentation by Andrew Kaiyala, vice president of bid development for The Lane Construction Corporation—a subsidiary of Salini-Impregilo and a leader in construction of North American infrastructure. Salini-Impregilo is recognized globally for water resource, rail and metro systems, bridges, roads and motorways, civil and industrial buildings, and airports.

One of the most frequent questions construction professionals ask, said Kaiyala, is: “Where is the data I need? It is estimated that stakeholders spend about half a day per week looking for data. Where do I look? Job trailer, on mobile devices, the plans in my pickup?” 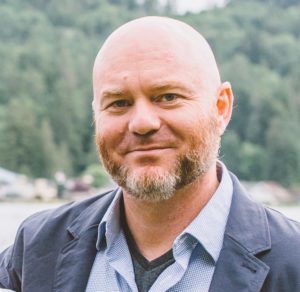 “You cannot overstate the value of a single source of data,” said Kaiyala. “A single source of truth, capturing and accessing content—structured and timely. A place to direct stakeholders, a single source to be able to construct, estimate, manage, and execute.” A digital twin would be the answer, but as Kaiyala points out, there was often a step back before taking the leap forward.

“I used to walk into a job trailer and knew what was current. I knew what was in the file cabinet: all the POs, project documents, drawings,” said Kaiyala. “Contractors had to take a step back, with all of the different digital file systems and applications. We struggled to navigate it all. Where is the application that closed out tasks; what was the final state? In realm of tech…how am I going to use these new tools to improve? The bottom line is the measuring stick, and if something did not result in a better bottom line, we could not continue to use it. Up until now— and I have reviewed many different efforts—the contractor did not have a tool for a single source of data. It was different for design offices. We don’t look at a project the same way as a designer, we look it in terms of how we build it.”

A new solution implemented by Lane over the past few years has met Kaiyala’s criteria for an update over relying solely on job shack records and files. “For the field, project control, 4D, work breakdown structure, [the Bentley product] SYNCHRO is here in the present and our roadmap forward,” said Kaiyala. “From bid development, detailing, adding construction steps to the model, cost, and the ability to break the project into pieces per stage and phase.” 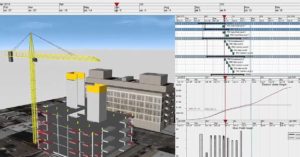 Example of a project in SYNCHRO

Through a common interface, a digital twin, as Lane’s implementation of SYNCHRO has shown, the corporate work breakdown structure is embodied, and coding structures are built so that various software platforms can talk. “We plan, simulate, track, report, and capture real-time structured data for situation awareness on the executive platform,” said Kaiyala. He noted that the timeliness of the data capture is critical for a digital twin to work. “Often, we would have info, but by the time we gathered it in one place to make decisions, the project has moved on. Taking a snapshot in time with paper records was very difficult. If managed right, the digital twin makes it easier to solve this.

The companion to, and source element of collaborative platforms like SYNCHRO, are the comprehensive “living models.” Considering the emphasis on a single source of data truth, how do you do this with a distributed environment that includes designers, construction managers, client, stakeholders, and more? Could you place one giant model in the cloud? Not recommended, but another model for models is powered by a distributed ledger of changes. There can be any number of copies of the same model, but instead of sending whole updated models to everyone’s devices, only the changes, as executed by various model holders, are distributed and synchronized on everyone’s copies.

But what form does this distributed model take as relates to digital twinning? As it applies to infrastructure projects, a digital twin is a high-fidelity 3D model and database of the infrastructure elements so that design, construction, and operations can benefit from an almost living and breathing “twin” of the physical elements. With real-time feedback and updates from “continuous surveying” and sensor (IoT, et al.) the infrastructure can utilize live and modeled (predictive) data for all phases, and machine learning and AI can be leveraged.

For Bentley Systems, the answer is an iModel. Think of a portable design model: it is a database of everything you need to convey to stakeholders, implementers of BIM technology at constructions sites, collaborating engineers, and others within the workflow. Some liken iModels to portable document formats (e.g. PDFs), but, unlike some of those formats, it does not “pound the data flat” to genericize them.

iModels, first introduced in 2009, store graphics from simple 2D planimetry to complex 3D solids, standard data tables used in BIM software, and much more. Viewers and collaborators do not necessarily need the specific applications that created the data stored in the iModel to access it.

But each legacy iModel was a snapshot, and if any of the collaborators made changes, new copies had to be distributed. How many different versions of a design file do you have on your hard drive? Version control has bedeviled computer-aided design and drafting from day one.

Keith Bentley, executive vice president at Bentley Systems, who we caught up with at the Year in Infrastructure 2019 Conference, said he wanted to remedy this challenge and provide additional capabilities to iModels where the cloud would feature prominently.

The idea of a singular, centralized model to solve all version-control issues is falling out of favor. When the cloud first became a reality, folks had visions of one giant master design loaded into the cloud and that everyone involved can simply connect as thin clients and work collaboratively on the master. This idea was tried, and soon recognized as a recipe for disaster and pose single points of potential failure. For scalability and portability, having many individual copies of models is optimal—provided there is a way to keep them all synchronized—according to Keith Bentley. “We have to embrace change, literally, and that change, the transactions and the timeline of changes, is what is most practical and valuable to enable in the cloud,” Keith Bentley says.

The newest incarnations of iModels work in the distributed change ledger mode. “People ask, ‘Where is the master [copy]?,’” says Keith Bentley. “There is no master. The ledger [of changes] and the timeline is the master, and this is on the cloud service. Better-aligning data means how well it’s defined in the model, and to standards, so that as many applications as possible can read, recognize, and utilize the information. He notes, “Data alignment and realignment will be the key to success in machine learning and cloud services.”

A testament to the resilience of heavy civil, transportation, and utilities construction is that there has been little slowdown in the U.S., and around the world, despite the global crisis. As the map below shows (based on a quick look at data from the American Road and Transportation Builders Association and others sources) that while some states have reported slow-downs in road construction, most are business as usual, and some have actually boosted spending to build while traffic loads are decreased. 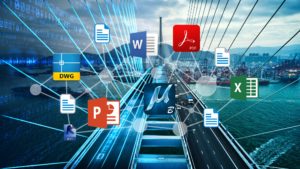 We should recognize that this does not reflect the potential ripple effects of, for instance, drops in gas tax revenue, or other budget adjustments. But it does show that heavy civil (like utilities) service constant and growing demand. When the pause button is released, accelerated infrastructure demands will still be there, perhaps with a backlog.

There may be new constraints, like less gathering around plan sets, more remote collaboration and meetings. And other trends already under way are seeing more data from IoT sensors, live feedback from imaging and laser modeling systems, and increased equipment automation. The demand for infrastructure will not abate, but money may be tighter while communities recover, so there may be further pressure to work faster and smarter. The time is now, more than ever, for digital twinning.

A footnote about terminology. It is running joke that new terms seem be made up faster than we can forget the old ones. I keep seeing yet another new buzz term in AEC: Virtual Design Construction (VDC). How do we contrast this with BIM, constuctioneering, 4D construction, and digital twins? We reached out to Rich Humphrey, Bentley’s vice president of construction for his take on these terms:

“VDC came out of the construction industry’s desire to use a term that better fits what they do versus BIM, which was perceived as focused on design. BIM and VDC are the same in the sense that it is all about new processes/workflows enabled by the use of a data-rich model in either the design or construction phase. Bentley is gravitating to using the term “digital twins,” including the Construction Project Digital Twin to mean the extension of BIM/VDC to new processes enabled by a “live” or “evergreen” 4D model, which is connected to live feeds from the field (via sensors, drones, mobile apps, etc.) and as a result is continuously updated and able to be used to drive greater insights and enhanced workflows.”