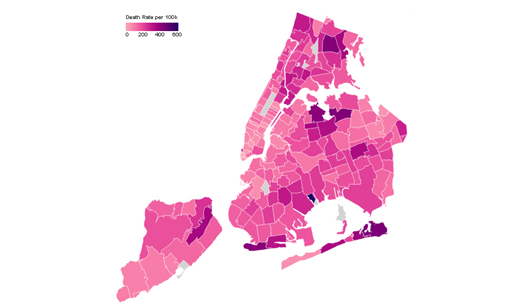 Yesterday the New York City Department of Health released an interactive map which shows for the first time the NYC Covid-19 death rate by zip-code area. The map confirms earlier reports that the virus has had the most devastating impact in low-income boroughs and the boroughs with the highest percentage of non-white populations.

Last month Ed Pilkington and Ankita Rao in A Tale of Two New Yorks made a convincing case that many wealthier white New Yorkers have been able to sit out the pandemic relatively safely, working from home and relying on home deliveries. Conversely poorer, often non-white, residents have been forced to continue working in ‘essential’ jobs and traveling on public transport.

The new NYC Department of Health map confirms this hypothesis. The zip-code areas with the lowest death rates are all in Manhattan neighborhoods with relatively high average incomes. The zip code area with the highest death rate is Canarsie-Flatlands in Brooklyn. The median household income is $27,104 in Canarsie-Flatlands. In Greenwich Village (zip-code 10012), which has one of the lowest death rates from Covid-19, the median household income is $109,037.

The Department of Health has also released a table showing the death rates by race/ethnicity. This table reveals that the death rates among Black/African-American and Hispanic/Latino people is twice as high as it is among white people in NYC.