The National Geographic has a new interactive feature which explains what you can expect from global heating. It does this by showing you a city which currently experiences average temperatures that your home town can expect to see in the year 2070.

In Your Climate, Changed the National Geographic uses an interactive map to show the future climate analogs of 2,500 cities around the world. These analogs are based on worst-case climate change scenario assumptions. The map automatically detects your location to show you your nearest future global heating twin. The map also explains what kind of climate zone your city currently experiences and compares that to the likely climate it will have in 2070.

National Geographic are not the first to use future climate analogs as a way to explain the effects of climate change. 23 Degrees has also released a clever interactive map which allows you to find your climate analog for the year 2080. Using this climate change model Frankfurt in Germany will be as hot as Malawi today and living in Berlin will be like living in Lesotho in southern Africa.

You can find your 2080 climate twin using The Summer of 2080 Will Be This Warm interactive map. If you enter your location or click on your location on the map you can view the town or city in the world which has a climate today which is similar to the climate you can expect in your locationcity in the year 2080. The map uses two different climate models. This allows you to find your climate twin for a global heating scenario of 4.2 degrees or 1.8 degrees. 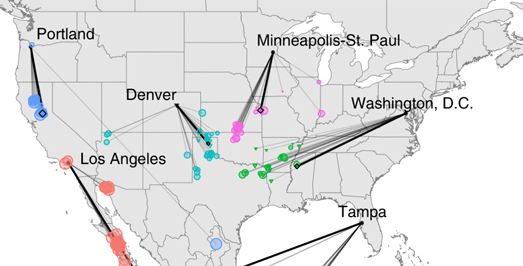 If you live in the USA then you can also use the University of Maryland’s interactive map, What Will the Climate Feel Like in 60 Years, to discover your 2080 climate twin. The map is based on work by scientists Matt Fitzpatrick and Robert Dunn, who used different climate models to find the contemporary climatic analogs for the weather that 540 North American urban areas can expect in the late 21st century. The study behind the map revealed that the climate in U.S. cities will significantly change over this century, becoming similar to contemporary climates which are hundreds of kilometers away.

Using the interactive map you can click on a town or city to discover which current location has a climate which is similar to the climate you can expect in 2080. The map provides two different analogs for each urban area. One shows the climate analog based on a high emissions climate model and the other view provides a climate analog based on a future where countries have actually reduced emissions.

The Crowther Lab has explored how global heating will effect 520 cities around the world and matched those predictions with cities that experience those temperatures today. The result is a simple to understand example of the likely results of global heating. Click on your city on the Future Cities interactive map and you can find out which city’s climate your city will resemble in 2050 as a result of climate change.