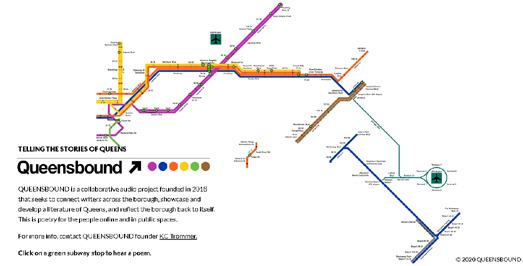 Queensbound is a collaborative audio project which features poetry by local writers from across the borough of Queens in New York City.

At the heart of Queensbound is an interactive subway map of Queens. All the green subway stations on the map indicate poems which you can listen to. Just click on a station marker to listen to the poem and read a short biography of the featured poet. The poems themselves seem to be roughly located to reflect the home locations of the featured poets.

The map is no longer accepting new poems but the map still allows you to read all the poems which were added during the project. The background map used for Places of Poetry is inspired by William Hole’s engraved maps created for Michael Drayton epic poem Poly-Olbion (1612). The Places of Poetry map is an original work but is heavily inspired by Hole’s highly decorative and iconographic map style.

Fans of the written word may also be inspired by the Poetry Atlas, which is an interactive map of poems written about locations around the globe.