You could argue that all great literature involves a journey of some kind. The idea of a hero undertaking a personal odyssey is probably older than the written word itself. From Homer’s epic Odyssey itself right up to and beyond the great American road trip novels of the Twentieth Century mythical journeys and quests have served as a metaphor for human life and existence. And as long as fictional journeys have existed I’m sure people have been attempting to map those journeys. 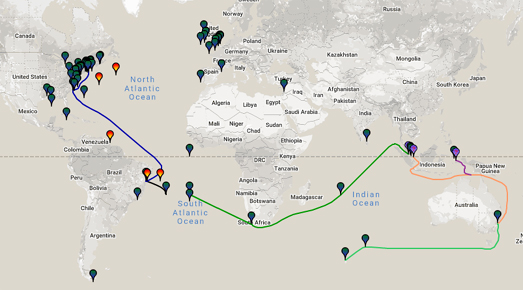 Back in 2008 Google Maps Mania first reported on the mapping journey undertaken by Tom Horn to plot all the journeys in the Aubrey–Maturin series of novels. The Aubrey–Maturin series is a sequence of historical novels by Patrick O’Brian, set during the Napoleonic Wars. The novels tell the adventures of Captain Jack Aubrey of the Royal Navy and his ship’s surgeon Stephen Maturin. You might be more aware of the characters from the movie Master and Commander, starring Russell Crowe, which was adapted from three of the novels.

The Patrick O’Brian Mapping Project started in 2006. 14 years later Tom Horn’s journey has now come to an end, as he has finally mapped all 21 novels in the Aubrey–Maturin series. Each of the novels has its own Google Map which plots the journeys undertaken by Captain Jack Aubrey in the service of the Royal Navy.

Of course Tom hasn’t spent the whole of the last fourteen years entirely devoted to mapping Patrick O’Brian novels. No – in fact back in 2005 Tom took a little sojourn to create the first Google Map to track and plot a novel set on Mars. In the novel ‘The Martian’ NASA astronaut Mark Watney is abandoned by the rest of his crew on Mars. In order to survive Watney has to drive a Mars rover 2,000 miles across the planet to Schiaparelli Crater where he has a chance of being picked up by another NASA mission.

Tom’s The Martian Map plots the course of Watney’s journey to Schiaparelli Crater and marks some of the Martian landmarks passed during the journey and the locations of some of the incidents he encounters along the way.

Ludovico Ariosto’s ‘Orlando Furioso’ is an epic 16th century poem. The poem is set in a time of war between the Christians and Saracens and involves journeys around the known world (and to the moon). As well as the eponymous hero Orlando the poem features a wide cast of colorful characters, including sorcerers, a gigantic sea monster and a flying horse.

The Orlando Furioso Atlas is busy mapping the journeys in each of the epic poem’s forty-six cantos. The character journeys in each of the cantos are shown on top of Martin Waldseemüller’s Universalis Cosmographia map of 1507. The use of this contemporaneous map helps to evoke the world as it was conceived at the time when Orlando Furioso was written.

The mythological power of the road-trip in American literature seems particularly strong. It is America’s ur-story, springing from the pioneering journeys of the early Western settlers. It is in many ways the story of America itself.

The Obsessively Detailed Map of American Literature’s Most Epic Road Trips sets out to map the great American journeys undertaken by some of America’s greatest writers (and a few not so great). The map features every place-name referenced in twelve American non-fiction books. The celebrated writers featured on the map include Mark Twain, Jack Kerouac and Tom Wolfe.

You can select to view each journey’s route on the map from the map side-panel. Click on individual markers and you can read excerpts describing the chosen location. The map therefore provides a handy accompaniment to any of the mapped texts. However to truly appreciate the map you need to read the book.

The LOTR Project is one of the most well established and best literary mapping projects on the internet. The project’s interactive Map of Middle Earth is a beautifully drawn map of J.R.R. Tolkein’s fantasy world, which allows you to follow The Fellowship’s journey from The Shire all the way to Mordor.

These literary journey maps are just a few of the many that have been featured on Maps Mania over the last 15 years. If you are interested in literature and books then you might want to explore a little further using the Maps Mania book maps tag.