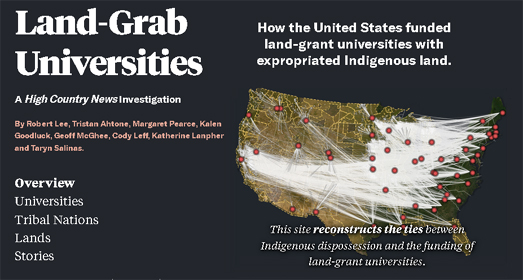 Many universities in the United States owe their existence to the theft of indigenous American land. The 1862 Morrill Act aimed to establish colleges across the United States. Colleges which were to be funded by “donating Public Lands to the several States and Territories”. That ‘donated’ land was to come from indigenous territories.

Under the act, through 162 violence-backed cessions, the USA stole approximately 10.7 million acres of land from 245 tribal nations. This land was divided into roughly 80,000 parcels. Under the Morrill Act states received 30,000 acres of this land, for each member of congress. The land, or the proceeds from the land’s sale, was to be used by the states for creating new colleges of higher education.

In Land-Grab Universities High Country News shows how 52 American universities owe their existence to the land-grant university system. These are universities which to this day educate very few indigenous people. The article includes a Mapbox powered interactive map which allows you to choose any state in the USA to see which universities received land-grants under the Morrill Act and which Morrill Act land parcels were used to fund each university. 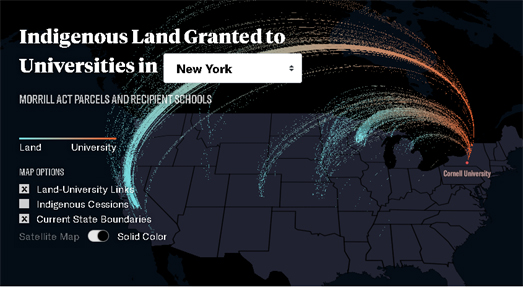 Western states mostly received land parcels from within their borders. Eastern states, which had no remaining indigenous land to steal, benefited from the sale of land parcels in other states. The High Country News investigation allows you to explore how individual universities benefited from land-grants. For example Cornell University, in New York state, benefited from 6,716 stolen land parcels from across the United States. Land stolen from 166 different tribal nations. In 2018 only 69 of Cornell University’s 22,000 students were American Indian or Alaska Native.