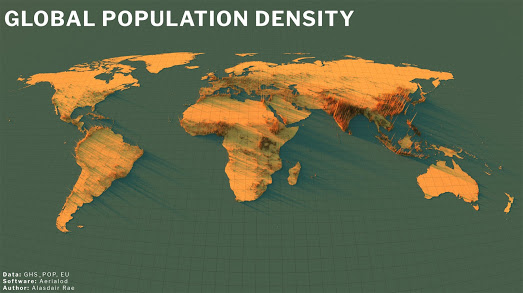 Over the last few weeks Alasdair Rae has been posting a series of population density maps to Twitter. On these maps population data in different regions of the world is visualized as population towers.

You can view a collection of Alasdair’s European population maps on his blog Stats, Maps n Pix. His Global Population Density map (pictured above) is a fantastic visualization of where most people live on Earth. It really does superbly convey the huge numbers of people living in India and China. It also exposes the vast population deserts of eastern Russia and much of northern Africa. I also like how the course of the River Nile is revealed by Egypt’s population mountains.

On each of Alasdair’s maps the height of the bars represents the number of people living in a 1km x 1km square area. Alasdair’s blog post also explains how he created the maps using QGIS and Aerialod, an interactive path tracing renderer for height maps.