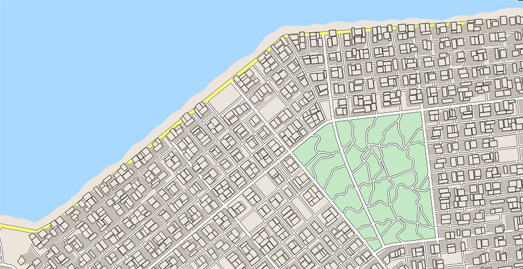 The Procedural City Generator is an impressive tool for creating random city maps in the style of American planned road-grid cities. All you have to do is press the ‘generate’ button and the wizard will automatically create for you a random city map.

The Procedural City Generator wizard does include a number of options which allow you to influence some of the features displayed on your generated random map. These include options to change the weightings for water (sea and rivers), the number of major and minor roads, the number of parks and the style of buildings displayed. The generator also includes the option to change the style of your random map. These style options include Google Maps, Apple Maps, a hand-drawn map style and a dark style.

If you like your generated city map you can download the finished map as an SVG or PNG image file.

If you want to create a random map of a less grid-like city then you could try the City Generator tool instead. Oskar Stalberg’s City Generator is another fun application which can automatically create a map of a fictional town, complete with buildings, roads and trees.

Just click on the empty City Generator canvas to start generating your city map. You can then watch as urban sprawl starts to spread out from the location where you first clicked. If you don’t like any of the gaps in your map you can click on the canvas again to add more buildings and roads to your randomly generated map.

The Medieval Fantasy City Generator
is another fun tool for creating maps. This one creates random fictional maps of medieval
towns. Just choose your size of town or city and the Wizard of Maps
will magically create your very own fantasy medieval map.

All the maps created by the Medieval Fantasy City Generator include a
number of similar features. Each town or city is centered around a
central market place. Each town is surrounded by a city wall. The city
wall has up to four gates, where up to four roads enter the city. All of
these roads end at the central market. A castle is also placed
somewhere along each city’s wall.