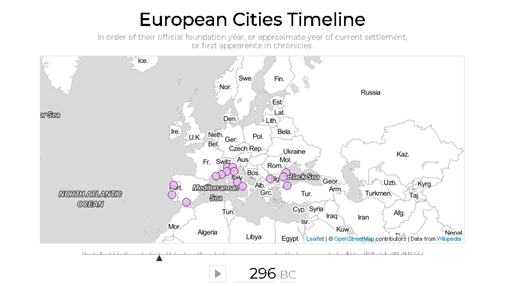 Malaga in southern Spain is one of Europe’s oldest continuously inhabited cities. The city was founded  in about 770 BC by the Phoenicians. Rome was founded at around the same time. Roman mythology dates the founding of Rome to around 753 BC, although the area had already been inhabited before that time.

There is obviously huge debate over how long individual cities have been inhabited and when they were first founded. The dates for this map all come from each city’s Wikipedia entry. Given the debatable accuracy of the data I would take the individual dates of each city with a pinch of salt. However I still find the map very interesting and it perhaps shows a general trend in the emergence and development of large urban centers across Europe over time.

On this map the very first cities emerge in Southern Europe around the Mediterranean and Black Sea. Then, during the time of the Roman Empire, new cities begin to emerge in northern Europe as the Empire expands across the continent. After the collapse of the Roman Empire there is a long period when very few new major cities emerged in Europe. Only during the High and Late Middle Ages do we see new major urban cities beginning to be founded again across all of Europe.