Vector Maps: Mapping the Habitats of the World

Nature Map Explorer is an interactive map which allows you to explore the biodiversity and ecosystems which can be found across the world. The map shows the natural habitats and biodiversity of animal and plant life around the globe and shows where these habitats are under threat. The map has been designed to help limit global biodiversity loss, support biodiversity conservation and to help mitigate against the impact of climate change.

The Nature Map Explorer includes a number of map layers which allow you to explore global biodiversity and ecosystems. For example the Terrestrial Habitat Types layer shows where forests, wetlands, deserts and other types of habitat can be found around the globe (the habitat types of North America is pictured above). If you want to see how the world might look without humans you can view the Potential Natural Vegetation layer, which visualizes what vegetation cover we could expect without human impact.

The Species Richness layer shows where in the world there is an abundance of mammals, birds, reptiles and amphibians and where there is little remaining biodiversity in animal and plant life. You can also view the negative impact of humans on biodiversity using the Threatened Species Richness layer which visualizes where plant and animal species are under threat across the world.

Ecoregions are ecologically and geographically defined areas which have distinct natural characteristics, species and habitats. The ecoregions are colored on the map by the type of habitats that exist within them. If you hover over an area on the map you can view more details about the region’s natural habitat and the biogeographic realm in which it exists. 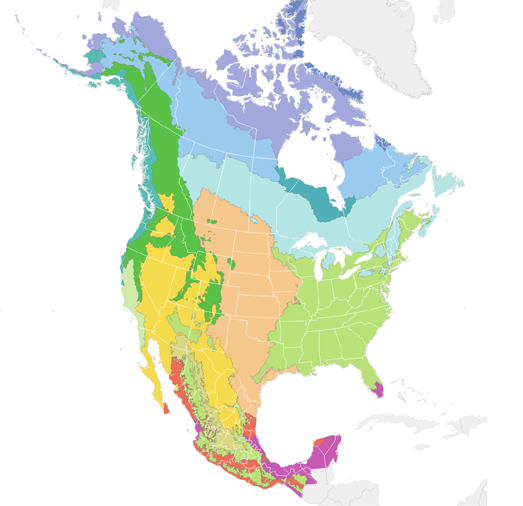 North America has a number of wildly different ecosystems. From the Arctic tundra of the extreme north to the tropical forests of southern Mexico there are many different ecoregions with very different climates and ecological systems within the continent of North America.

bplant.org divides North America into 15 distinct ecoregions, which are then divided into 50 level 2 ecoregions. These ecoregions are based on classifications from the US EPA, Canada’s CEC, and Mexico’s INEGI.

The Ecoregions of North America interactive map divides Canada, the USA and Mexico into these 15 different ecoregions. Each ecoregion is shown on the map using a distinct color. You can learn more about the characteristics of any of the ecoregions by clicking on it on the map. This will take you to information on the ecoregion’s climate, vegetation and biodiversity characteristics. It will also provide information on the subregions which exist within a selected ecoregion.