Vector Maps: Dispersion in US Metros Increases Even Before COVID-19: New Census Estimates 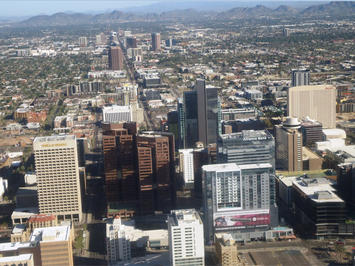 The latest US Census Bureau metropolitan area population estimates (for 2019) were largely lost in the coverage of the COVID-19 pandemic. Yet the new results, released a few weeks ago, indicate that people are moving to where social distancing is less challenging — the suburbs and exurbs, with their lower density and perhaps from a pandemic point of view, their lower exposure density — with less intense human interaction and hence lower infection risk associated with ground-oriented housing (detached and attached houses and townhouses), travel by car and generally less crowded conditions, such as in stores. 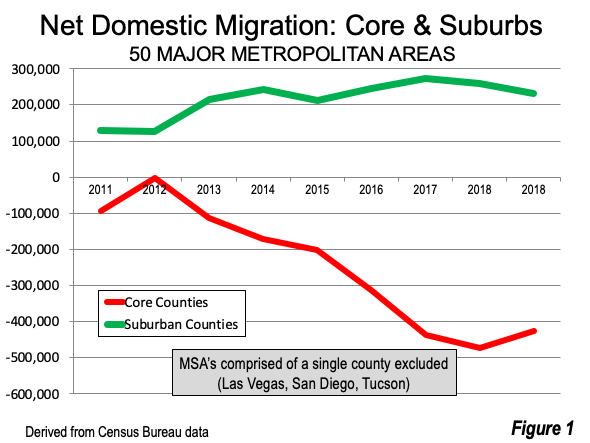 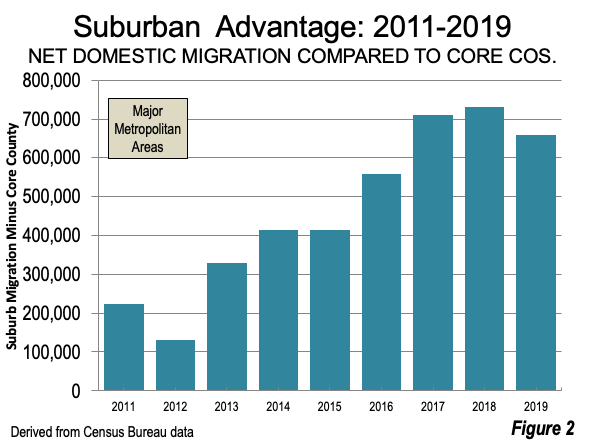 This is just another manifestation of the trends that have been underway since World War II. Most recently, since 2010, 92% of major metropolitan area growth was outside the functional urban cores (Figure 3). Employment dispersion continues, with more than 90% of new jobs being created outside the downtowns (central business districts) of the major metropolitan areas since 2010 (Figure 4). 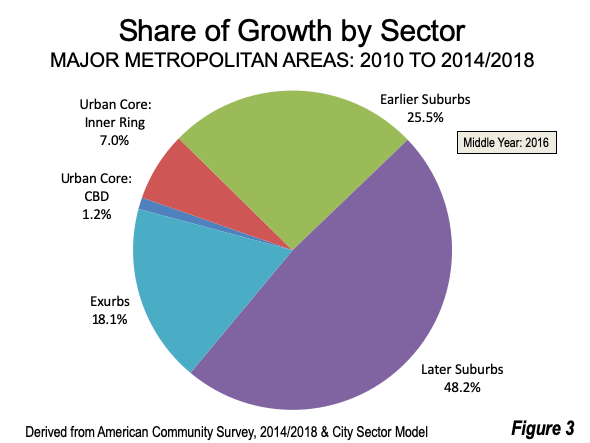 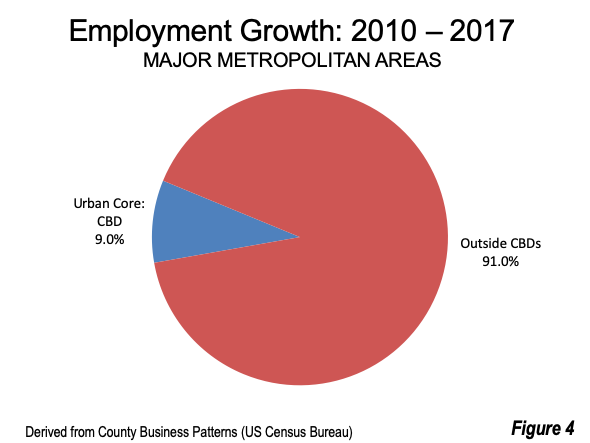 Population growth has fallen off strongly among the major metropolitan areas. Eight of the largest 10 had slower growth from 2015 to 2019 than the first four years of the decade. Only Atlanta and Phoenix had larger growth rates in the later period (Figure 5). 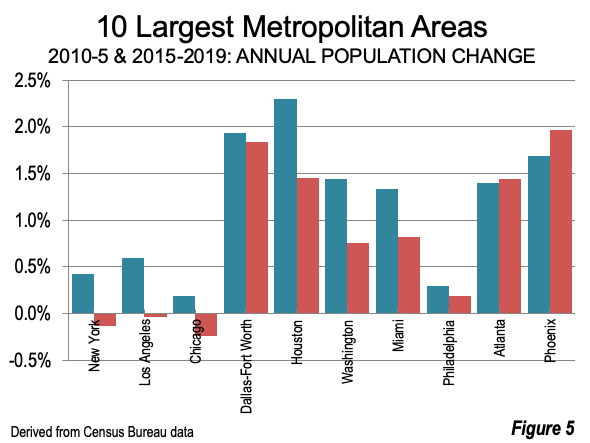 Wannabe megacity Chicago continues to slip away from the 10 million status, with a population stuck at less than 9.5 million. The metropolitan area has lost about 90,000 residents since 2014 and has slightly fewer residents than in 2010. If Chicago had continued to grow at its tepid 2000s rate, the 10 million figure might have been achieved by the mid 2020s. Now, that may never occur. But as grim as things may seem, Chicago’s net domestic migration was the lowest in five years, and less as a percent of its population (0.79%) than in New York or Los Angeles.

Dallas-Fort Worth retained its fourth position, three other over-5 million metropolitan areas, Houston, Washington and Miami each moved up a place, as Philadelphia fell from 5th to 8th. Philadelphia had been ranked fourth from 1950 to 2000. There was a time when Philadelphia was the nation’s largest urban center, with the city and adjacent suburbs (Southwark and Northern Liberties) having a population greater than New York City in 1790 and 1800.

Phoenix: The Next 5 Million Metropolitan Area

The “star” of this year’s population estimates was Phoenix (photo above), which reached 4,948,000 and has probably already passed five million. Phoenix became the 10th largest metropolitan area, having displaced long time top 10 incumbent Boston. It also moved past San Francisco earlier in the decade. Phoenix grew 2.0% over the past year, a feat exceeded only by Austin (2.8%) and Raleigh (2.1%) among the nations 53 metropolitan areas with more than 1,000,000 population.

Moving Away from the Largest Metropolitan Areas 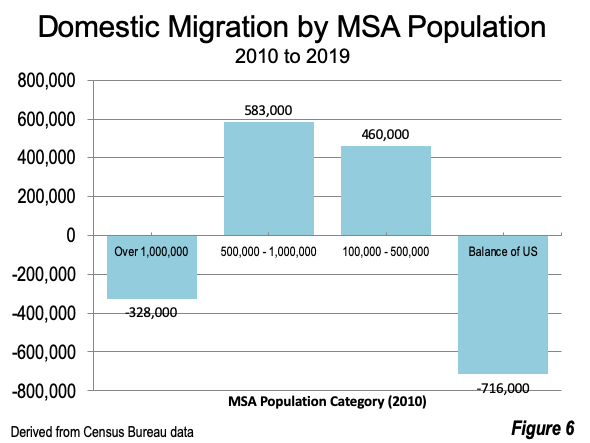 The big question is how things will change in light of the COVID-19 epidemic and the lockdowns.

The metropolitan areas with the greatest pockets of urban density have a substantial challenge in controlling an epidemic that requires social distancing. The problem, as we have discussed before is not so much the population density at any macro level, but rather the personal level (See: Exposure Density and the Pandemic). Exposure density is intensified for individuals by crowded conditions (such as crowded subways, residences, elevators, shopping, events, etc.) far more than any theoretical area-wide population density. Combined with all this is the evidence that low-income citizens are more likely to fall victim to the epidemic than the rest of the population (see: Data Suggests Many New York City Neighborhoods Hardest Hit by COVID-19 Are Also Low-Income Areas).

The ability of commerce and public policy — companies, governments and people — to respond to the necessity of social distancing through internet meetings has been a revelation. Business meetings, not all, but most, can be conducted without any concern about social distancing. There could be substantial benefits to the extent that technology can virtualize the work place for millions of people.

Foremost could be the environmental gains as millions more eliminate the work trip (working at home, mostly telecommuting), along with shorter commutes made possible by lessened traffic congestion. Even before the epidemic, working at home had raced ahead of transit as a commute option in the United States. In 2018, working at home led transit in 44 of the 53 metropolitan areas with more than 1,000,000 population.

Not being tied to a physical commute every day could make it possible for households to move to places they would prefer more. This is not just the continuing movement of people away from the crowded urban cores to the suburbs and exurbs, but even beyond. The key, obviously, is that they be able to carve out an affluent standard of living out of the post-COVID economy.

Little of this seems to portend any sort of greater centralization. It seems likely that the dispersion that has been going on for decades in the United States (and around the world) will continue. 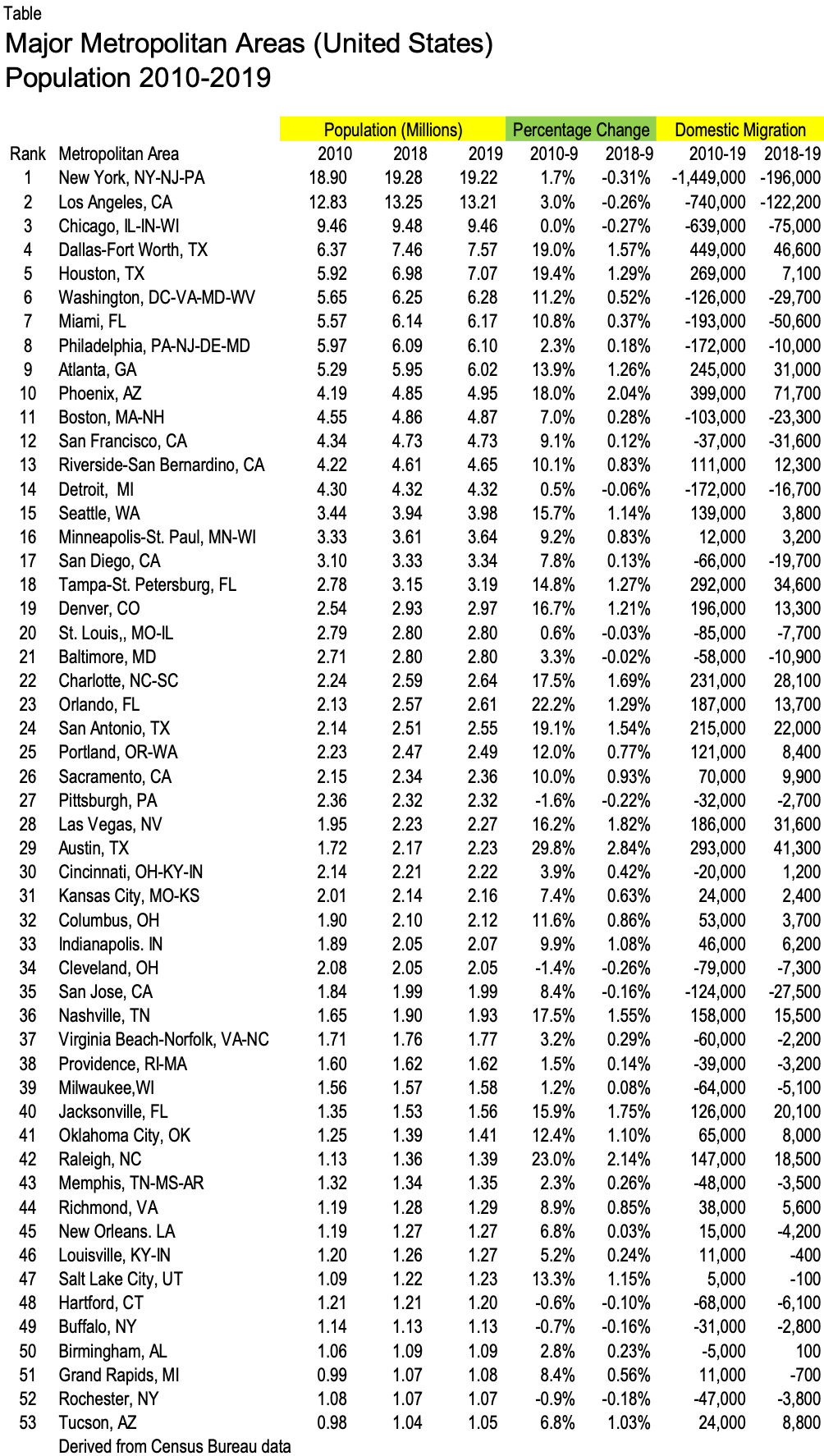 Photograph: The Central Avenue corridor (downtown) in Phoenix (by author).

Wendell Cox is principal of Demographia, an international public policy and demographics firm. He is a Senior Fellow of the Center for Opportunity Urbanism (US), Senior Fellow for Housing Affordability and Municipal Policy for the Frontier Centre for Public Policy (Canada), and a member of the Board of Advisors of the Center for Demographics and Policy at Chapman University (California). He is co-author of the “Demographia International Housing Affordability Survey” and author of “Demographia World Urban Areas” and “War on the Dream: How Anti-Sprawl Policy Threatens the Quality of Life.” He was appointed by Mayor Tom Bradley to three terms on the Los Angeles County Transportation Commission, where he served with the leading city and county leadership as the only non-elected member. Speaker of the House of Representatives appointed him to the Amtrak Reform Council. He served as a visiting professor at the Conservatoire National des Arts et Metiers, a national university in Paris.