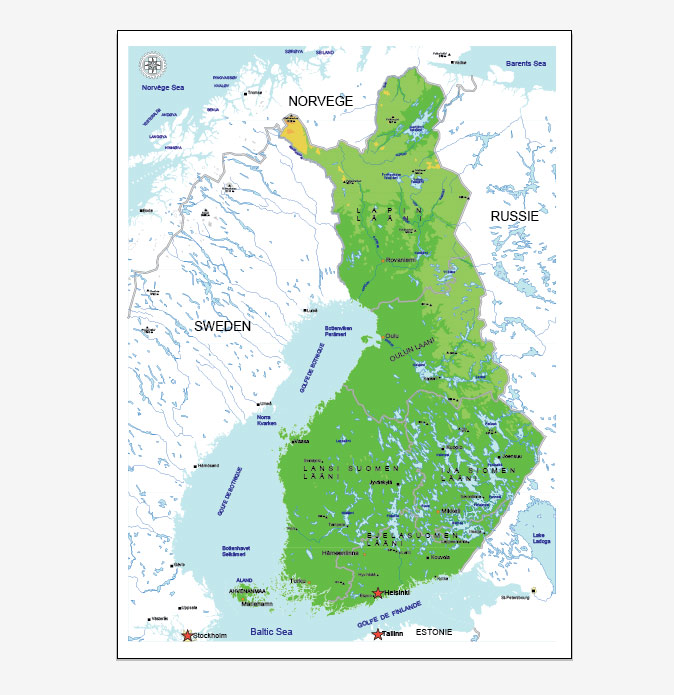 Finland
Country in Europe See also: Full version maps of Finland
Finland is a country in Northern Europe bordering Sweden, Norway and Russia. Helsinki, the capital of the country, is located on the peninsula and adjacent islands of the Baltic Sea. In the city, it is worth visiting the 18th-century sea fortress Sveaborg, the fashionable Design District and numerous museums. In the vast Arctic province of Lapland, which is famous for its national parks and ski resorts, you can see the northern lights.
Capital: Helsinki
Population: 5.531 million 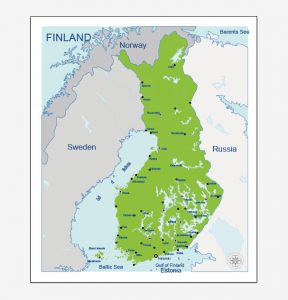 Finland, officially the Republic of Finland, is a sovereign state in Northern Europe. A peninsula with the Gulf of Finland to the south and the Gulf of Bothnia to the west, the country has land borders with Sweden to the northwest, Norway to the north, and Russia to the east. Estonia is south of the country across the Gulf of Finland. Finland is a Nordic country situated in the geographical region of Fennoscandia, which also includes Scandinavia. Finland’s population is 5.5 million (2014), staying roughly on the same level over the past two decades. The majority of the population is concentrated in the southern region. In terms of area, it is the eighth largest country in Europe and the most sparsely populated country in the European Union.

Finland is a parliamentary republic with a central government based in the capital Helsinki, local governments in 317 municipalities, and an autonomous region, the Åland Islands. Over 1.4 million people live in the Greater Helsinki metropolitan area, which produces a third of the country’s GDP. From the late 12th century, Finland was an integral part of Sweden, a legacy reflected in the prevalence of the Swedish language and its official status. In the spirit of the notion of Adolf Ivar Arwidsson (1791–1858), “we are not Swedes, we do not want to become Russians, let us therefore be Finns”, the Finnish national identity started to become established. Nevertheless, in 1809, Finland was incorporated into the Russian Empire as the autonomous Grand Duchy of Finland. In 1906, Finland became the second nation in the world to give the right to vote to all adult citizens and the first in the world to give all adult citizens the right to run for public office. Following the 1917 Russian Revolution, Finland declared itself independent.

In 1918, the fledgling state was divided by civil war, with the Bolshevik-leaning “Reds” supported by the equally new Soviet Russia, fighting the “Whites”, supported by the German Empire. After a brief attempt to establish a kingdom, the country became a republic. During World War II, the Soviet Union sought repeatedly to occupy Finland, with Finland losing parts of Karelia, Salla and Kuusamo, Petsamo and some islands, but retaining independence. Finland joined the United Nations in 1955 and established an official policy of neutrality. The Finno-Soviet Treaty of 1948 gave the Soviet Union some leverage in Finnish domestic politics during the Cold War era. Finland map joined the Organisation for Economic Co-operation and Development (OECD) in 1969, the NATO Partnership for Peace on 1994, the European Union in 1995, the Euro-Atlantic Partnership Council in 1997, and finally the Eurozone at its inception, in 1999.

Finland was a relative latecomer to industrialization, remaining a largely agrarian country until the 1950s. It rapidly developed an advanced economy while building an extensive Nordic-style welfare state, resulting in widespread prosperity and one of the highest per capita incomes in the world. However, Finnish GDP growth has been negative in 2012-2014 (-0,698% to -1,426%), with a preceding nadir of −8% in 2009. Finland is a top performer in numerous metrics of national performance, including education, economic competitiveness, civil liberties, quality of life, and human development. In 2015, Finland was ranked first in the World Human Capital and the Press Freedom Index, and as the most stable country in the world during 2011-2016 in the Fragile States Index, and second in the Global Gender Gap Report. A large majority of Finns are members of the Evangelical Lutheran Church, though freedom of religion is guaranteed under the Finnish Constitution.

Lying approximately between latitudes 60° and 70° N, and longitudes 20° and 32° E, Finland vector map is one of the world’s northernmost countries. Of world capitals, only Reykjavík lies more to the north than Helsinki printable map. The distance from the southernmost—Hanko—to the northernmost point in the country—Nuorgam—is 1,160 kilometres (720 mi).

Finland is a country of thousands of lakes and islands—about 188,000 lakes (larger than 500 m2 or 0.12 acres) and 179,000 islands. Its largest lake, Saimaa, is the fourth largest in Europe. The area with the most lakes is called Finnish Lakeland. The greatest concentration of islands is found in the southwest in the Archipelago Sea between continental Finland and the main island of Åland.

Much of the geography of Finland is explained by the Ice Age. The glaciers were thicker and lasted longer in Fennoscandia compared with the rest of Europe. Their eroding effects have left the Finnish landscape mostly flat with few hills and fewer mountains. Its highest point, the Halti at 1,324 metres (4,344 ft), is found in the extreme north of Lapland at the border between Finland and Norway. The highest mountain whose peak is entirely in Finland is Ridnitsohkka at 1,316 m (4,318 ft), directly adjacent to Halti.
The whooper swan, Finland’s national bird

The retreating glaciers have left the land with morainic deposits in formations of eskers. These are ridges of stratified gravel and sand, running northwest to southeast, where the ancient edge of the glacier once lay. Among the biggest of these are the three Salpausselkä ridges that run across southern Finland.

Having been compressed under the enormous weight of the glaciers, terrain in Finland vectorial map is rising due to the post-glacial rebound. The effect is strongest around the Gulf of Bothnia, where land steadily rises about 1 cm (0.4 in) a year. As a result, the old sea bottom turns little by little into dry land: the surface area of the country is expanding by about 7 square kilometres (2.7 sq mi) annually. Relatively speaking, Finland is rising from the sea.

The landscape is covered mostly by coniferous taiga forests and fens, with little cultivated land. Of the total area 10% is lakes, rivers and ponds, and 78% forest. The forest consists of pine, spruce, birch, and other species. Finland printable map is the largest producer of wood in Europe and among the largest in the world. The most common type of rock is granite. It is a ubiquitous part of the scenery, visible wherever there is no soil cover. Moraine or till is the most common type of soil, covered by a thin layer of humus of biological origin. Podzol profile development is seen in most forest soils except where drainage is poor. Gleysols and peat bogs occupy poorly drained areas.